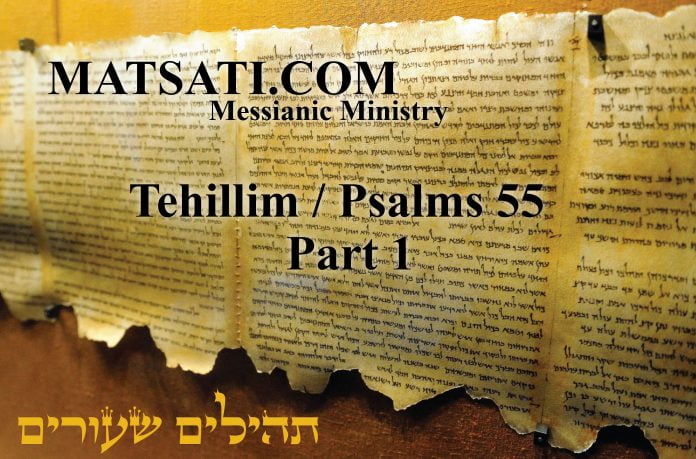 This week’s study is from Tehillim / Psalms 55:1-23, the psalm opens saying, א  לַמְנַצֵּחַ בִּנְגִינֹת מַשְֹכִּיל לְדָוִד:  For the choir director; on stringed instruments. A Maskil of David. (NASB)  David says, ב  הַאֲזִינָה אֱלֹהִים תְּפִלָּתִי וְאַל-תִּתְעַלַּם מִתְּחִנָּתִי: ג  הַקְשִׁיבָה לִּי וַעֲנֵנִי אָרִיד בְּשִֹיחִי וְאָהִימָה: ד  מִקּוֹל אוֹיֵב מִפְּנֵי עָקַת רָשָׁע כִּי-יָמִיטוּ עָלַי אָוֶן וּבְאַף יִשְֹטְמוּנִי: 55:1 Give ear to my prayer, O God; And do not hide Yourself from my supplication. 55:2 Give heed to me and answer me; I am restless in my complaint and am surely distracted, 55:3 Because of the voice of the enemy, Because of the pressure of the wicked; For they bring down trouble upon me And in anger they bear a grudge against me. (NASB)  He seeks the Lord to hear his prayer because he seeks a speedy answer due to the pressure of the enemy.  David says that his heart is in anguish (55:4), he has been put in fear because of the enemy (55:5), he wishes that he had wings to fly away and be at rest (55:6), so that he could goto the wilderness (55:7) to be at rest.  He asks the Lord to confuse the tongue of the wicked drawing a parallel to the Torah and Migdal Bavel (55:9).  He says that day and night mischief is in their midst (55:10) which might be paralleled to the Lord being in the midst of the righteous.  David says that it is not an enemy who reproaches him (55:12), who is it that is causing him such anguish?  He appears to be speaking to someone who is an equal to himself (55:13), someone who walked in the house of God with him (55:14).  There appears to be a certain level of deceit in this person, David calls for death and the grave (55:15), whereupon he will call upon the Lord God Almighty to save (55:16).  David speaks of continually coming before the Lord to make his petition known (55:17) and believes the Lord will redeem his soul (55:18). Read more here: Tehillim 55-Part1

Watch Dr Duane Miller Discuss The Strength of a Nation is...