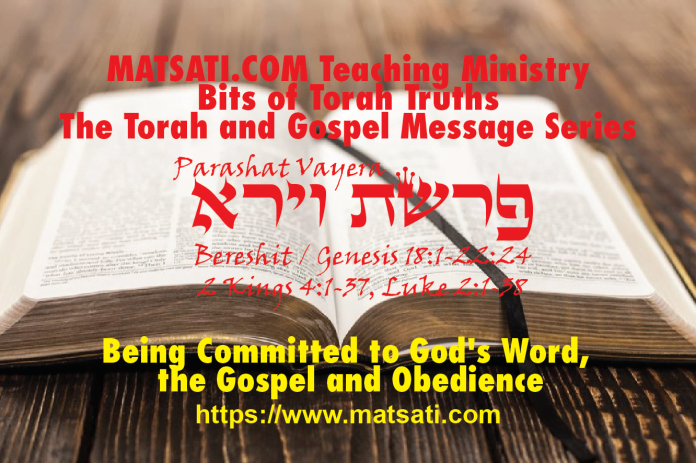 In this week’s Torah portion, Parashat Vayera (Bereshit / Genesis 12:1-17:27) we read about the day of retribution, the day of God’s wrath, illustrated in the destruction of Sodom and Gomorrah. The Bible teaches us that on the Day of the Lord, one will either experience God’s mercy or His divine wrath. The whole concept of sin and redemption leads to the expectation of a Messianic figure who will deliver God’s people. The Torah describes such a person at a future time whom God would raise up, one who would resemble Moshe and live according to the Torah and bring help to a people who are in need, giving light to their eyes to see, and delivering to them the Word of God. In the opening verses from Parashat Vayera we read about three men meeting Abraham and give him a promise of having a son. Sarah heard this promise and laughed, and so we are told this is the reason why their son is named Yitzchak (Isaac). The three men ate a meal that Abraham had Sarah prepare for them, and then they turned to go down to Sodom and Gomorrah. The Lord God Almighty speaks with Abraham about what He is about to do, to destroy these cities due to their sins. Abraham argues on behalf of the people, asking if there are 50, 40, 30, 20, and 10 righteous persons whether the Lord would destroy the cities. We read that only one person was found, Lot, and yet he was vexed with the corruption of that place. Peter wrote about Lot being vexed by living among the wicked people of Sodom in 2 Peter 2:4-22.

2 Peter 2:4-22
2:4 For if God did not spare angels when they sinned, but cast them into hell and committed them to pits of darkness, reserved for judgment; 2:5 and did not spare the ancient world, but preserved Noah, a preacher of righteousness, with seven others, when He brought a flood upon the world of the ungodly; 2:6 and if He condemned the cities of Sodom and Gomorrah to destruction by reducing them to ashes, having made them an example to those who would live ungodly lives thereafter; 2:7 and if He rescued righteous Lot, oppressed by the sensual conduct of unprincipled men 2:8 (for by what he saw and heard that righteous man, while living among them, felt his righteous soul tormented day after day by their lawless deeds), 2:9 then the Lord knows how to rescue the godly from temptation, and to keep the unrighteous under punishment for the day of judgment, 2:10 and especially those who indulge the flesh in its corrupt desires and despise authority. Daring, self-willed, they do not tremble when they revile angelic majesties, 2:11 whereas angels who are greater in might and power do not bring a reviling judgment against them before the Lord. 2:12 But these, like unreasoning animals, born as creatures of instinct to be captured and killed, reviling where they have no knowledge, will in the destruction of those creatures also be destroyed, 2:13 suffering wrong as the wages of doing wrong. They count it a pleasure to revel in the daytime. They are stains and blemishes, reveling in their deceptions, as they carouse with you, 2:14 having eyes full of adultery that never cease from sin, enticing unstable souls, having a heart trained in greed, accursed children; 2:15 forsaking the right way, they have gone astray, having followed the way of Balaam, the son of Beor, who loved the wages of unrighteousness; 2:16 but he received a rebuke for his own transgression, for a mute donkey, speaking with a voice of a man, restrained the madness of the prophet. 2:17 These are springs without water and mists driven by a storm, for whom the black darkness has been reserved. 2:18 For speaking out arrogant words of vanity they entice by fleshly desires, by sensuality, those who barely escape from the ones who live in error, 2:19 promising them freedom while they themselves are slaves of corruption; for by what a man is overcome, by this he is enslaved. 2:20 For if, after they have escaped the defilements of the world by the knowledge of the Lord and Savior Jesus Christ, they are again entangled in them and are overcome, the last state has become worse for them than the first. 2:21 For it would be better for them not to have known the way of righteousness, than having known it, to turn away from the holy commandment handed on to them. 2:22 It has happened to them according to the true proverb, ‘A dog returns to its own vomit,’ and, ‘A sow, after washing, returns to wallowing in the mire.’ (NASB)

Dr.Duane Miller – LIVE – How are the Gospel and Obedience...