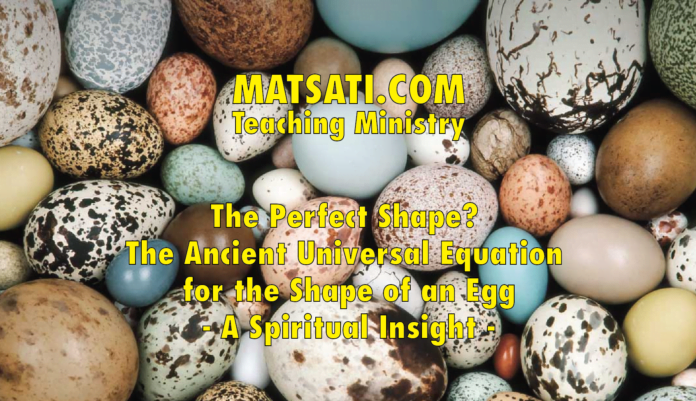 For centuries, scientists wondered why egg shapes are so different from one bird to the next. The study of fossil egg-shell includes describing the general morphology and microstructure of the eggshell. Combinations of these characteristics help researchers classify fossil eggshell types and sometimes provide clues about the identity of the egg-layer. One of the reasons for what actually shapes the egg is the size of the mother bird’s oviduct.

Researchers from the University of Kent, the Research Institute for Environment Treatment, and Vita-Market Ltd have discovered the universal mathematical formula that can describe any bird’s egg existing in nature. There are 10,500 species that use eggs to give birth. Eggs have the shape not to roll away once laid, they have the strength to withstand the weight / touch of the mother, they have enough size to incubate an embryo, and small enough to exit the body of the female in the nest. The analysis of egg shapes using four geometric shapes, the sphere, the ellipsoid, the ovoid, and the pyriform (conical), where the mathematical formula for the pyriform has not been derived as of yet. In the research paper, the scientists introduced an additional function into the ovoid formula for the purpose of fitting the model to the geometric shape which they call the last stage in the development of the sphere-ellipsoid which is applicable to any egg geometry. The modified ovoid mathematical function has four parameters, (i) egg length, (ii) maximum width, (iii) shift of the vertical axis, and (iv) the diameter at one quarter of the egg length. The mathematical description of the shape of the egg has found applications in food research, in structural and mechanical engineering, agriculture, biosciences, architecture, and aeronautics. The new mathematical model allows for the development of force tensor models that allow for the study of the construction of thin walled vessels that have the shape of an egg which theoretically should be stronger than a perfect sphere vessel. With this new finding, being able to describe any egg shape, we can expect to see the future applications across many industries in technological advancement. This breakthrough in mathematical derivation, or model development, reveals to us why such collaborative research from multi-disciplinary sciences is essential for advancing R&D efforts.

The Spiritual Insights that we receive from this type of research is related to the elegant design of creation! It is well known that the source of ideas for human innovations in technology is the natural world. Man has made some impressive achievements in both mathematics, science, and technology. The technological wonders in the last century alone have radically changed our world, some for our benefit, some for our detriment. Many scientists spend their lives just studying nature, studying how insects, birds, and mammals grow, behave, and live, how their bodies function, etc. The lessons that are learned have inspired many new academic and technological advances, just as we are seeing here in deriving the equation that describes the egg, which has applications in many areas of science, technology, and materials design. For example, before velcro was developed, an engineer looked at the burrs that stuck to his dog’s fur and discovered by use of the microscope the little hooks on the burrs making them so sticky. [3] A few examples of this are how butterflies inspired the design of thermal imaging devices. [4] In the study of the morphology of butterfly wings, their scales allowed scientists to take heat detection to greater levels of sensitivity and speed. Thermal imaging has many applications in industrial, medical, and the military. In the case of the butterfly application to thermal imaging, the insights that were given to scientists from God’s creation was in the design of the resonators, the optical cavity modulated by thermal expansion and refractive index changes, causing wavelength conversion from invisible infrared to visible light. [5] The insights from the wing design, the scales allow significant advancements in existing infrared detector technology.

Another example is found in the ability of dragonflies to carry as much as 15x as much their own body weight while they fly through the air. Most high performance aircraft are unable to lift much more than their own body weight. Because of this achievement of the insect’s ability to lift, scientists have looked at why this is even possible. Studying the dragonfly wings led to scientific understanding that the wing actually generates lift by producing a whirlwind airflow. Efforts are now being made to apply this principle to aircraft by designing wings that produce greater lift through this whirlwind effect. [6]

Engineers have for many years studied spiders and their ability to spin webs, their material properties, and strength that is stronger than steel. [7] What is interesting is each type of spider has its own unique type of web style, geometric design. Some spiders spin webs around their abdomen and fill with air so they can dive underwater.

Other animals demonstrate a high level of engineering skill, for example, birds are skilled in weaving, masonry, tunneling, and building structures that can withstand wind and rain on a tree limb. Beavers are able to build dams out of trees and mud and construct homes that have entrances only from under water. There are also water insects that manufacture small bricks they use to build chimney shaped towers. [8] The sheer massive number of creatures on this earth, the millions of types of animal life should humble us before a powerful and awesome God. It is amazing how some believe the workings of natural laws, time, and evolution, and pure chance alone could have produced life as we know it here on earth. Note how much skill and wisdom is placed in these creatures to name a few. It is a testimony to the power and design of God. Among other things, this is why God is worthy to receive glory, and honor, and power, for He created all things, and by His will they exist and were created. (Revelation 4:11) He makes everything work out according to his plan (Ephesians 1:11)

All that we know, everything begins with the fundamental truth that the God of Israel is our personal Creator (הַבּוֹרֵא). The idea that God exists is the first and primary rational to the nature of reality. As the opening passages to the Scriptures state, בְּרֵאשִׁית בָּרָא אֱלֹהִים אֵת הַשָּׁמַיִם וְאֵת הָאָרֶץ: “In the beginning (בְּרֵאשִׁית), God created the heavens and the earth” (Bereshit / Genesis 1:1) The word בְּרֵאשִׁית “in the beginning” comes from the word הַרִאשׁוֹן meaning the first. Tehillim / Psalm 111:10 רֵ֘אשִׁ֤ית חָכְמָ֨ה ׀ יִרְאַ֬ת יְהוָ֗ה “The beginning of wisdom is the fear of the LORD.” This means the first of all things, the beginning of wisdom (רֵ֘אשִׁ֤ית חָכְמָ֨ה) is the fear of God. The things that we see in creation, the intricate complexity of life and the symbiotic relationships found in the environment, these things should generate great fear and respect for the power of God! Note how this word בְּרֵאשִׁית includes the word ראשׁ (rosh, head) which provides the idea of the head of all things, this is the Messiah, the Creative Word of God who is the head over all beginning and authority. This is why Paul wrote what he did in Colossians 1:16 stating that it is in the Messiah through Whom and for Whom all things were created.

Studying the rabbinic literature, the sages say that the word בְּרֵאשִׁית (in the beginning) refers to the wisdom of the Torah. The narrative goes as far to say that according to Mishley / Proverbs 8:22, כב יְהוָה קָנָנִי רֵאשִׁית דַּרְכּוֹ קֶדֶם מִפְעָלָיו מֵאָז: “The LORD brought me forth as the first of his works, before his deeds of old,” that this means wisdom was personified as the Torah. The Wisdom of God was the power that created the universe. In light of the Apostolic Writings, we understand this to be the Messiah, as in Yeshua our Messiah the divine wisdom of God was personified. Yeshua is the Lamb slain before the foundation of the world, the One who was to be revealed from before creation as the first and the last, the beginning and the end. This is what we read according to John’s testimony, בְּרֵאשִׁית הָיָה הַדָּבָר “in the beginning was the Word,” וֵאלהִים הָיָה הַדָּבָר “and God was the Word…” הַכּל נִהְיָה עַל־יָדוֹ “All things were made by Him,” הַכֹּל וּמִבַּלְעָדָיו לֹא נִהְיָה כָּל אֲשֶׁר נִהְיָה “and without Him was not anything made that was made.” (John 1:1 and 1:3) We note that the source of all truth comes from God, He is the faithful One. Because of these things, only the LORD God Almighty receives the glory of creation forever and ever. (Revelation 4:11) The scientific research this week draws out the power of God, the power of His Word, and the power of the Messiah Yeshua to make new, to save, and to deliver from anything. The Lord God revealed all of these things in his created universe in order to reveal to us the great extent of his wisdom, glory, and love. These things are revealed to us, His created beings, and all of this was for the sake of the Messiah Yeshua, who built the world in חֶסֶד (grace), and who forever reigns as the King of eternal life and love!

Ancient Asteroid Impacts Created the Ingredients of Life on Earth and...

Studying the Commandments is considered as having Fulfilled Them, פרשת ובחקתי,...