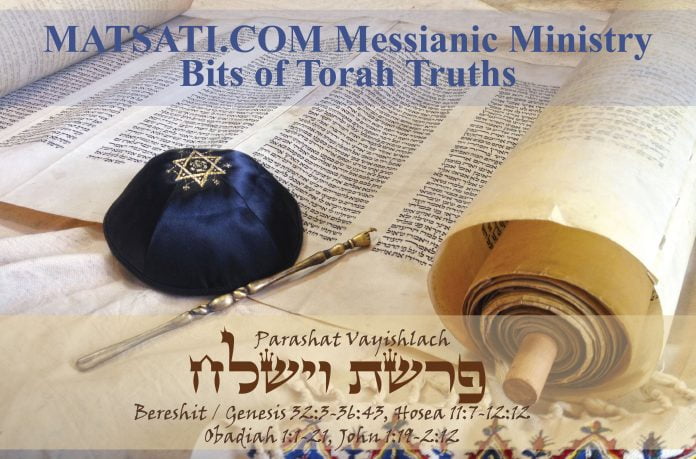 In this week’s reading from Parashat Vayishlach (Shemot / Genesis 32:3-36:43) we read that Jacob sent messengers before him to his brother Esau along with a gift in order to appease him of the things done in the past (32:3-20).  Jacob wrestles with a man (32:24) and realizes that he has seen God face to face and lived (32:25-31).  Jacob and Esau meet (33:1-16) and Esau returns to his place in Seir and Jacob travels to Shechem.  Jacob buys the piece of land before the city of Shechem (33:19) and his daughter Dinah is raped according to verse 34:2 Shechem the son of Hamor the Hivite took her by force (against her will).  Jacob’s sons deceive the people of Shechem (34:5-24), and Simeon and Levi take their swords and kill every male in the city while they were in pain from circumcision (34:25-33).  God instructs Jacob to go to Bethel and dwell there (35:1).  The Lord appears to Jacob again and confirms his name change from Jacob to Israel and blesses Jacob (35:9-15).  Traveling to Bethel, Rachael gives birth and dies (35:16-19).  Isaac lives to 180 years old and dies and is buried (35:28-29).  The Parashah ends stating the land cannot sustain the flocks of both Jacob and Esau, so Esau moves his family and all that he owns away (36:1-43).  Jacob calls out to the Lord saying that He is unworthy of God’s grace and truth (32:11).  Jacob encounters God at Peniel (פְּנִיאֵל).  The Lord changes Jacob’s name to Israel and strikes his hip changing both who he is and the way he walks.  These Scriptures reveal to us that an encounter with the Lord can change our lives for the better.  On the other hand, an encounter with sin can also effect our lives for the worse.

According to the Masoretic Text Bereshit / Genesis 34:1 tells us, א   וַתֵּצֵא דִינָה בַּת-לֵאָה אֲשֶׁר יָלְדָה לְיַעֲקֹב לִרְאוֹת בִּבְנוֹת הָאָרֶץ: 34:1 Now Dinah the daughter of Leah, whom she had borne to Jacob, went out to visit the daughters of the land. (NASB)  The Targum Pseudo Jonathan translates this verse to say, ונפקת דינה ברת לאה די ילידת ליעקב למיחמי בנימוס בנת עמי ארעא “And Dinah the daughter of Leah whom she bare to Jakob, went forth to see the manners of the daughters of the people of the land.”  What is interesting about this verse is that we are told Dinah had decided to leave her family and the community to go out to see the daughters of the land.  The rabbis say that she went out to “see the manners (בנימוס) of the daughters of the people of the land.”  Here the word בנימוס means “law, custom, or practice.”  The idea is that Leah’s daughter Dinah went out to see the custom of the native girls, or their practice during menstruation (Syriac Peshitta Esth2:12, according to the Leiden critical edition).  The translation for this verse is significant if we take into consideration the rabbinic discussions on menstrual impurity, and the surrounding nations.  How is menstruation understood and what does it symbolize according to the rabbis?  The Aramaic Targum, speaking about “the custom” of the daughters of the land, the translation appears to be drawing in a parallel to Dinah’s going, leaving her community, and the Torah perspective on the ritual purity and sexual relations.  In the Scriptures, sexual relations has been connected to the concepts of adultery, idolatry, and all of the various aspects of these things regarding sin and disobedience to the Lord God in heaven, etc.  This one verse from Bereshit / Genesis 34:1 according to the Aramaic translation can quickly become rich with context all by the use of one word; Dinah went forth to see “the manner” (בנימוס) of the daughters of the people of the land.  Was Dinah in the act of seeking out sin in her desire to go forth and see the daughters of Canaan?  Why do you think Dinah was interested in learning the customs of the daughters of the land?  We mentioned earlier that sin can have a significant impact upon our lives for the worse.  The result of Dinah’s curiosity in the daughters of the land, the Scriptures tell us, ב   וַיַּרְא אֹתָהּ שְׁכֶם בֶּן-חֲמוֹר הַחִוִּי נְשִֹיא הָאָרֶץ וַיִּקַּח אֹתָהּ וַיִּשְׁכַּב אֹתָהּ וַיְעַנֶּהָ: 34:2 When Shechem the son of Hamor the Hivite, the prince of the land, saw her, he took her and lay with her by force. (NASB)  Dinah was not where she was supposed to be and Shechem took her and had sexual relations with her by force, she was rapped.  As the narrative goes, Simon and Levi took vengeance upon the entire city following three days having been circumcised according to Bereshit / Genesis 34:24-27.  Dinah’s desire (one persons desire) to go, to see, and to learn the ways of the surrounding people resulted in the death of an entire population of people.  How significant of a warning is this for us today to avoid seeking the way of the world?  Doing so, according to this week’s portion, can have far reaching consequences.

Midrash Rabbah Bereshit, Parashat 80, Part 11
And took Dinah out of Shechem’s house, and went forth.  Rabbi Judah said, They dragged her out and departed.  Rabbi Hunia observed, when a woman is intimate with an uncircumcised person, she finds it hard to tear herself away.  Rabbi Huna also said, She pleaded, And I, how shall I carry my shame? (2 Samuel 13:13), until Simeon swore that he would marry her.  Hence it is written, And the sons of Simeon … and Shaul the son of a Canaanitish woman (Bereshit / Genesis 46:10), this means the son of Dinah who was intimate with a Canaanite.  Rabbi Judah said, It means that she acted in the manner of the Canaanites.  Rabbi Nehemiah said, It means that she was intimate with a Hivite (Shechem) who is included in the Canaanites.  The Rabbis said, She was so called because Simeon took and buried her in the land of Canaan.

The rabbis say in Midrash Rabbah Bereshit, Parashat 80, Part 1, that Dinah was forcefully removed from Shechem’s house and brought back home.  The idea put forward in the midrash is that when a woman is intimate with an uncircumcised person she finds it difficult to tear herself away.  This is an important interpretation since circumcision may be related to sin before God.  In Parashat Vayera, we discussed the topic of circumcision and the importance of the circumcised heart, which changes us from the inside out, transforms our lives, and we begin walking and living in righteousness and justice, truth and innocence, love and mercy, the very things the Torah instructs us to do.  Considering the midrash on Abraham and circumcision (Midrash Rabbah on Parashat Vayera, see the study on Parashat Vayera), and what Yeshua said in Matthew 5:8 “Blessed are the pure in heart, for they shall see God.” (NASB), this comparison is important since Scripture tells us that Abraham circumcised himself in the flesh, and based upon the opening verses in Parashat Vayera, we see the servant attitude Abraham has towards the angels.  This suggests that Abraham also circumcised himself in his heart and/or that God had also done this work as well.  He behaved as a humble servant, he bowed himself down, he got water for their feet and bread to eat so they could rest and refresh themselves.  Abraham had a pure heart, and the Lord showed Himself to him.  The men who attached themselves to the sign of the covenant (circumcision), the power of God to transform the heart, and to live in righteousness, truth, justice, love, and mercy, these are the signs of a circumcised heart that is humble before the Lord God Almighty.

This is a very important context leading up to Dinah having an interest to leave her community to seek out “the manners (בנימוס) of the daughters of the people of the land” and the rabbinic interpretation in Midrash Rabbah Bereshit, Parashat 80, Part 11 of being intimate with an uncircumcised person to find it difficult to tear oneself away afterwards.  If Dinah going out to see the custom of the native girls (e.g. their practice during menstruation), may be paralleled to sexual relations, adultery, and idolatry, the entire context of the Torah, the blessings and the curses may be drawn in to teach us that we are to be very careful, mindful, and watchful of our lives to subdue the evil desires to seek out things that are not of God.  Notice how the Apostle Paul considers a similar context we found here in our study in Colossians 3:5.

Colossians 3:5
3:5 Therefore consider the members of your earthly body as dead to immorality, impurity, passion, evil desire, and greed, which amounts to idolatry. (NASB)

Paul compares immorality, impurity, passion, evil desire, and greed to idolatry.  According to Tehillim / Psalms 51:12-13, sin causes separation from the Lord which is another way to say that as we sin we are acting in opposition to the leading of God’s Spirit.  In the final verses of the psalm David recognizes that the Lord is looking for repentance, justice (מִשְׁפָּט) and righteousness (צְדָקָה) over sacrifice in his statements in Tehillim / Psalms 51:18-19 “For You do not delight in sacrifice, otherwise I would give it; You are not pleased with burnt offering.”  The sacrifices the Lord God is looking for is a broken spirit, and a broken and a contrite heart.  A heart hat seeks after the Lord and His ways.  In Tehillim / Psalms 51:15 David says, טו  אֲלַמְּדָה פשְׁעִים דְּרָכֶיךָ וְחַטָּאִים אֵלֶיךָ יָשׁוּבוּ: “Then I will teach transgressors Your ways, And sinners will be converted and turn to You” just prior to verse 51:18-19 saying that the Lord does not delight in sacrifices but in a broken spirit.  David is declaring God’s ways and that our relationship with the Lord begins in our hearts.  This is a good context for Dinah’s desire to seek out “the manners (בנימוס) of the daughters of the people of the land.”  The unhealthy attitude toward sin will lead to immoral sexual relations, adultery, and idolatry, which is one context of all of the Torah.  The sacrifice the Lord is looking for in our lives is to remove the dead parts from our bodies on the inside, and to perform Teshuvah, to turn from sin (which synonymous to removing the dead parts on the outside), to walk in His righteousness and truth, love and mercy, which is the very definition of seeking and living in His ways.  The point of this week’s study is to seek the Lord and His ways and not the ways of the world.  With the Lord’s help, by the power of the Holy Spirit, and His Son Yeshua the Messiah, we are given the ability to recognize the differences between right and wrong, good and evil, what we should verses what we should not be doing.  Don’t be caught seeking the ways of the world like Dinah.  An encounter with sin will effect your life in a way that will change you forever, for the worse.  The better choice is to remain in the Messiah, in His community, and stay away from the ways of the world.  This week’s portion speaks of diligently seeking the Lord and His ways in the Messiah Yeshua. BTT_Parashat Vayishlach-2014

Watch Dr. Duane D. Miller PhD Discuss What is the most...

Bits of Torah Truths, Chol Hamoed Pesach, Are you Breaking the...