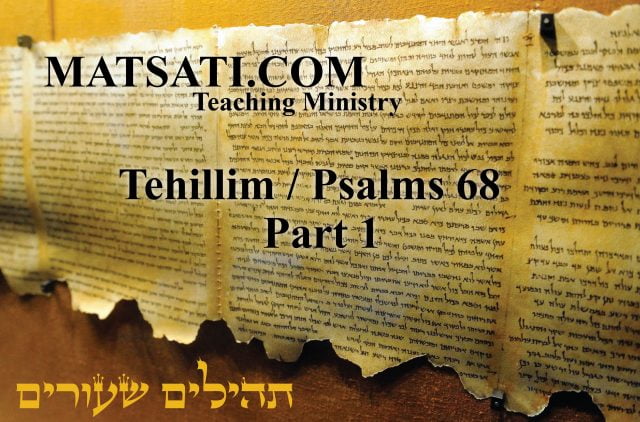 In this week’s study from Tehillim / Psalms 68:1-35, the psalm opens saying, For the director of music. Of David. A psalm. A song. 68:1 Let God arise, let His enemies be scattered, And let those who hate Him flee before Him. (NASB)  David describes the enemies being scattered where the Lord is fire (68:2), the wicked perish, whereas the righteous are glad and rejoice (68:3).  The Righteous 68:4 Sing to God, sing praises to His name; Lift up a song for Him who rides through the deserts, Whose name is the Lord, and exult before Him. (NASB) The Lord is then described as upholding justice and righteousness (68:5) and how the Lord goes forth before His people (68:7).  The Lord showers His people with blessings (68:8) whereas the kings of the wicked flee before the Lord (68:12).  David continues saying, 68:14 When the Almighty scattered the kings there, It was snowing in Zalmon. 68:15 A mountain of God is the mountain of Bashan; A mountain of many peaks is the mountain of Bashan. 68:16 Why do you look with envy, O mountains with many peaks, At the mountain which God has desired for His abode? Surely the Lord will dwell there forever. 68:17 The chariots of God are myriads, thousands upon thousands; The Lord is among them as at Sinai, in holiness. (NASB)  What is the importance of snow in Zalmon?  What is the importance of the mountain of Bashan? Read More Here: Tehillim 68-Part1

Parashat V’zot Hab’rachah: The God of the Upright Ones.

Parashat Kedoshim, The First Fruits of Death and the Zavakh Shilamim...

New Propulsion System could take Humans to Mars Faster than ever...