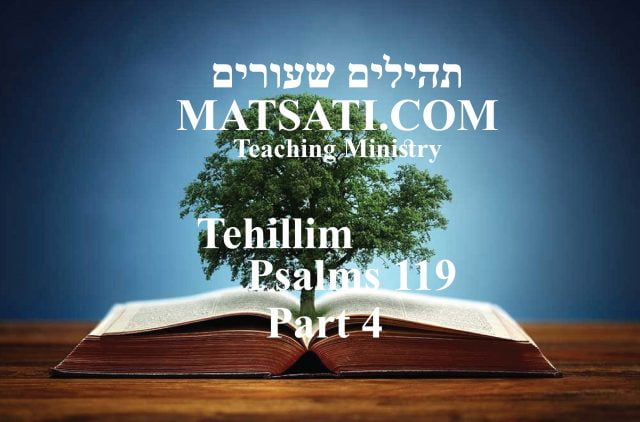 The Torah is God’s instruction on how those who place their faith and trust in Him, either Jew or Gentile, are to live so that all will be well with him (Devarim / Deuteronomy 4:40). The Torah says (Shemot / Exodus 12:48-49, Vayikra / Leviticus 24:22, Isaiah 56) that God’s instructions are not just for the Jewish people. The prophetic visions of Isaiah (Isaiah 2) speak of this truth, where the Gentiles who choose to be a part of God’s people will live by His truth. This is a consistent theme throughout the Apostolic Writings. The Lord chose to reveal His ways through the Jewish people, they were to be a light to the world and bring this revelation of God to the nations. Yeshua reminds us of this in the words he spoke in Matthew 5. These things are consistent with Tehillim / Psalms 119:159 which states “Consider how I love your precepts; revive me and give life to me, O Lord, according to your loving kindness.” David’s words in Tehillim / Psalms 119 speak of his asking for salvation, and that the Lord would give him life, so that he could follow in the way of the Lord according to His Torah. The Lord Judged David based upon his faithfulness to the Lord and his desire to walk in His ways. The Lord did not judge David in his ability to keep every point of the Law. Nobody has ever been “saved” (given life) by their ability to keep Torah, nor has that ever been an option for salvation. The idea that the Torah-based Judaism taught that someone may be saved by obeying the Torah is a false teaching. Throughout the church age, it has been taught that Judaism is a works based faith. The error of the Jewish leaders in Yeshua’s time illustrate that not everyone will have faith in Yeshua as the Messiah. One of the arguments from Judaism against Christianity was the absence of the Torah centric teaching that we are to live our lives based upon God’s righteous way of living. Paul wrote “Let God be true but every man be a liar” in Romans 3:4. The only thing that is “right,” is what the Lord God of Israel Himself has established. The conclusion, based upon what David writes in Tehillim / Psalms 119:1-2 is that faith and the desire to follow His Torah are inseparable according to God. This truth is established in God’s Words to Moshe according to Devarim / Deuteronomy 10:12 (“to fear Him, walk in His ways, to love Him and to serve Him with all your heart and soul”) “His ways” were given in the Torah.

A Kingdom of priests and a holy nation.

Bits of Torah Truths, Parashat Tetzave, Consecrated unto the Lord