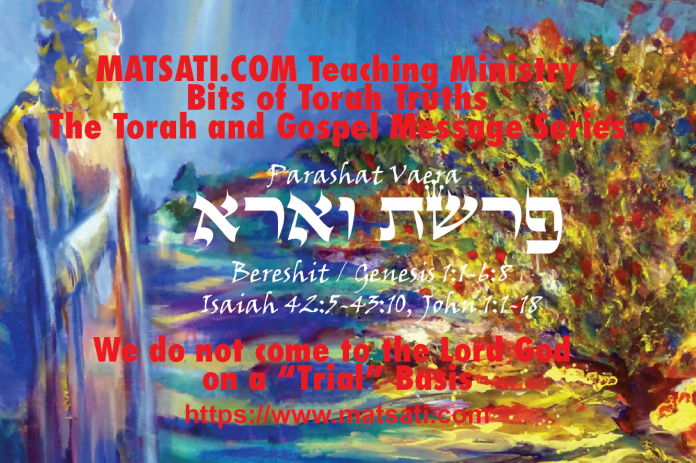 The significance of what we read here in this week’s Torah portion is taking God’s Word seriously in our lives in the sense of by the way we live our lives, either being according to God’s word or according to what we see is good in our own eyes. Our words and our actions reveal the truth about what we believe. The Scriptures speak to this truth, and the author of the book of Hebrews speaks to the power of the Word of God to discern one’s intentions according to Hebrews 4:11-13.

Hebrews 4:11-13
4:11 Therefore let us be diligent to enter that rest, so that no one will fall, through following the same example of disobedience. 4:12 For the word of God is living and active and sharper than any two-edged sword, and piercing as far as the division of soul and spirit, of both joints and marrow, and able to judge the thoughts and intentions of the heart. 4:13 And there is no creature hidden from His sight, but all things are open and laid bare to the eyes of Him with whom we have to do. (NASB)

The author of the book of Hebrews writes about the people in the wilderness receiving the gospel message and rejected it due to their falling into disobedience. (Hebrews 4) He goes on to describe how the Word of God is powerful, it is living, active, and sharp (like a sword) to divide soul and spirit. From a Jewish perspective, the soul is connected to the body (mind consciousness) and the spirit is given from God which is eternal. The Word of God is powerful enough to make a division between soul and spirit, suggesting that the word helps to separate the two, as one (the soul) tends towards the flesh, and the spirit tends towards the things of God. The Word of God is able to judge the thoughts and intentions of one’s heart, meaning, one will either accept God’s Word and make application to our lives, or reject God’s word and live as one wants without regard for righteousness, holiness, justice, and truth. We remain alive today to bring glory to God according to His Mercy. Even in the midst of blaspheme against the name, the Lord God Almighty does not put a man or woman to death. This is what we observe in this week’s Torah portion, Pharaoh disregards and blasphemes the Name of God, but yet the Lord God of Israel did not put him to death. The Lord God Almighty does this in order to show us His power, and in order that we will proclaim His name throughout the whole Earth. In this week’s Torah Portion we see Pharaoh saying “Who is the God of Israel?” He said this with disdain (the feeling that someone or something is unworthy of one’s consideration or respect). The way the Lord God revealed Himself to Pharaoh was for the purpose of proclaiming His glory and His name to all peoples. The world would know the power of God through Moshe, God’s anointed one. What the Lord God is revealing to us and what He was saying to Pharaoh, what he was about to do to Pharaoh and his people, would be the instrument through which the whole of mankind would become aware of who God is, and what God does to those who reject Him and His commands. We are learning who the God of Abraham is, and what it means to be in a covenant relationship with Him. The power of God is to do the impossible and He is demonstrating this for us in this week’s Torah portion! This is how the commentary Rabbeinu Bahya, Shemot / Exodus 9:16 Part 1 describes what is taking place stating the following:

Rabbeinu Bahya, Shemot / Exodus 9:16 Part 1
בעבור הראותך את כוחי, “in order to demonstrate to you My power.” G’d did not also display His גבורות, as this was an aspect of His which He did not display in Egypt. However, during the redemption of the future, G’d will display this aspect of His power also as testified to by Ezekiel 40,4 who mentions this in connection with his vision of the building of the Third Temple. The key word in Ezekiel’s vision is the words הובאתה הנה הראותכה spelled with the letter ה at the end. This is a hint that at that time additional dimensions of G’d’s power and greatness will become manifest. The letter ה is absent in the word הַרְאֹתְךָ used by Moses to describe what G’d had shown Pharaoh.

Rabbeinu Bahya states that the Lord God did not display His גבורות as this was an aspect of His that He did not reveal in Egypt. The word גבורות comes from the word גְּבוּרָה meaning courage, strength, or mighty one. The rabbis note how this word reveals a future expectation of the redemption of God in relation to His power. It is interesting how Yeshua explains to his disciples all power (גבורות) and all-authority (כָּל־מִמְשָׁל) has been given to him. In the Messiah Yeshua, the Lord God demonstrated His גבורות to all the world. The rabbinic commentary states that the building of the Temple of God is connected to this dimension of power (גבורות) and the establishing of the Covenant with His people. This is paralleled to the Lord God establishing the Temple of our bodies in the Messiah. This is accomplished through sending His Holy Spirit to dwell in our hearts for the purpose of transforming us to love and serve Him. In Romans 2, Paul cites Isaiah 52:5, which speaks of the nations of Isaiah’s time who were conquering God’s people, and blaspheming questioning God’s power to save. We see something very similar in the book of Jeremiah and the king of Babylon questioning the ability of the God of Israel to save the people. The point was this exile was the people’s fault, not the Lord’s. Their sins led to the Lord God removing His protective power (his protective hand), allowing the Gentiles to conquer the Jewish nation.

Even though God’s calling in the life of His people was to obedience, they struggled with sin. This happens when we begin to tolerate a culture of sin allowing it into our lives and becoming familiar with the world around us. The Scriptures describe how the Gentiles would blaspheme God (Romans 2:24) due to God’s people not living as they should according to God’s Word. The Scriptures provide us with a picture of how all fall short of the glory of God and the Torah requirement for our lives. When this happens, some people will see and blaspheme the name of God due to our failures. We must however be honest about our failures and not become familiar with the world such that we do not see our sins. Paul connects idolatry, adultery, covetousness, theft, murder, all of these sins together in a rabbinic way, to describe those things the nations blaspheme the name of God due to these sins being found in God’s people. This may be why the rabbis say the plague of fire and ice encompasses all of the other plagues previously brought against Egypt. Paul called out the people based upon what was reported about them coupled with the rabbinic interpretation of sin, in order to draw one’s attention to both the major and the minor sins that one commits in life. The Gospel Message provides us with the expectation of the anointed one to come and lead the way. We trust in the Lord God Almighty, believe in the Son (Yeshua) and receive the Holy Spirit of God into our hearts, and God Himself empowers us to overcome the world (sin). We are given the desire to walk in God’s ways, to draw near, and to closely examine our lives such that we can properly serve Him. (Philippians 2:7) This is the fruit of the Spirit the Lord God causes to grow in our lives, to seek justice, to love mercy, and to do what is right, loving others with a servant type attitude. This week’s Torah portion draws out these concepts of the Lord revealing Himself to the world through the power of deliverance. What the Lord God is looking from us today is to be doers of the word and not just hearers only. In Shemot / Exodus 9:27 Pharaoh said “I stand guilty this time. The LORD is in the right, and I and my people are in the wrong.” Pharaoh admitted his sin here, but he continued to change his mind turning back to sin. We are to be single minded, being able to admit and confessing our sins before God, and believing upon Yeshua the Messiah for the salvation of the soul. This week’s study leads us to understand these things when we consider that the Torah is a vital part of the Gospel Message!

Watch – The Killer Neural Wiring That Links Eyes and Wings...

Bits of Torah Truths, Parashat Terumah, פרשת תרומה, Who we are...