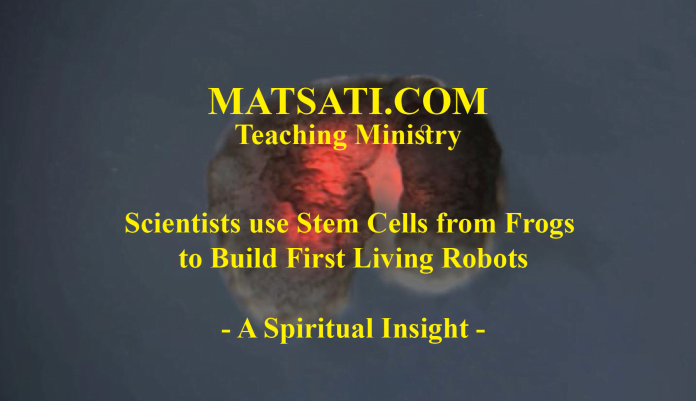 Researchers in the United States have created the first fully organic living robots by assembling cells from African clawed frogs into small robots that move around under their own power. The research paper [1] reports the creation of one robot that propels itself along using two legs, and another robot with a hole in the middle that can be used to carry objects. These are custom made lifeforms that have never existed before on Earth, and they are what the researchers from the Allen Discovery Center at Tufts University in Medford Massachusetts call “programmable organisms.” Today, we understand robotics as a careful combination of metal and plastic for both strength and durability. These researchers believe there are additional benefits for making robots from biological tissues. The idea is when these robots become damaged, they are capable of healing themselves, and once their programmed task is completed, they die, decay, and decompose.

One of the goals of this research is for the rapid design and implementation of these living systems for specific jobs. The researchers point out the potential of the use of living embryonic cells has the ability to resist entropy stating the following:

“As examples of this resistance, embryonic development and regeneration reveal remarkable plasticity, enabling cells or whole organ systems to self-organize adaptive functionality despite drastic deformation. [1-2] Exploiting the computational capacity of cells to function in novel configurations suggests the possibility of creating synthetic morphology that achieves complex novel anatomies via the benefits of both emergence and guided self-assembly.” [3]

Future applications for this type of technology would be to clean up microplastics pollution, locate and digest toxic materials, drug delivery, or to remove plaque from artery walls, etc. This technology was made possible by artificial intelligence (AI) methods. The researchers began with models using silicon, then transferred the design to living systems using a cell-based construction toolkit in order to create a living system with programmable behavior. This was accomplished using AI and robotic automation. Some steps however do require manual human intervention. The Organic robots that were created were 1 mm long, and the AI program begins by generating random 3-dimensional configurations of 500-1000 skin and heart cells. The heart cells are used as the mechanism for motion. Each design is tested in a virtual environment to see how far the robot can move when the heart cells are initiated to beating motion. Heart cells naturally expand and contract and therefore are the miniature engine that drives robotic movement until the energy reserves run out. The researchers reported these robots have enough fuel inside for them to be functional for a week to ten days before dying. The AI system generated 100 generations of a handful of designs before the researchers began the manufacturing process in the lab. The scientists used tweezers and cauterizing tools to scrap skin and heart cells from embryos of African clawed frogs (Xenopus laevis). The source of the materials for the robots (the cells) led to the name “xenobots.” The researchers used frog cells (amphibian cells) with the future prospect of using mammalian cells which may allow them to live on dry land. The future plans for this technology is to develop blood vessels, nervous systems, and sensory cells to form rudimentary eyes, etc. An ethical dilemma may occur as these robotic systems may be used for more cognitive capabilities so they are more versatile in their applications, that is a long way off. The ultimate goal is to learn more about living systems, the mechanisms for making organic robotics, and being able to program and manipulate these materials. The things we may learn from this kind of materials development research is to have a greater understanding on topics such as birth defects, cancer, age-related diseases, etc, all of which may be corrected or solved once we have a greater understanding of these biological functions and structures which would lead ultimately to having greater control over growth and form.

The Spiritual insights that we receive from this type of research on synthetic lifeforms and robotics draws us back to the creation account, the Lord God as our creator and sustainer of all things. When we read through the creation account, in Bereshit / Genesis 2:4, we are told the Lord God Almighty created the “generations” of the heavens and the earth, using the Hebrew word toldot (תולדות). It is interesting to study the word Toldot in the Torah, because this represents the created order of all things before man falling into sin. Following the fall into sin, this word toldot is spelled slightly differently, as תלדות. (each time in Bereshit / Genesis 36) Notice how this is a defective spelling for the phrase “Generations” and each time the phrase appears in the phrase “these are the generations of” as the Torah describes the generations of the heads of families, this word is spelled defectively with a missing vav (ו). The vav appears to be lost. Using the Judaic Classics software, searching for תולדות shows two search results, the first in our verse (Bereshit / Genesis 2:4) and the second in the book of Ruth 4:18. Here we find in Ruth 4 this formulaic way of saying the generations of Perez, and the word toldot is spelled with the vav restored. The way the text is written showing the missing vav, this leads us to consider the connection between the creation of heaven and earth and the fall of Mankind, and then the creation of the family line of Perez. As we know, the number six, the letter vav (ו) represents man, and the very first vav in the Torah is associated with the first man, Adam. The name Perez means “breach” meaning to break through something. This imagery given here suggests the Lord God Almighty is breaking through and restoring something indicated by the restoration of the letter vav (ו). In the story of Ruth we read about God’s redemption, the kinsman redeemer, and through the family line of Ruth of the Messiah Yeshua. This vav may provide us with a picture of the Messiah, who is the descendent from the generations of Perez, who then goes on to live a perfect life according to the Torah, laying his life down on our behalf in payment for sin, and abolishing death and separation. The first vav (ו) was lost through the sin and disobedience of Adam, the vav (ו) was restored in the second Adam, the Messiah Yeshua.

As man continues to learn more about God’s creation, he gains the ability to use or manipulate the materials we find here on earth, even those materials form living systems to make new living systems. This also reminds us of what is written in the Scriptures following the great flood according to Bereshit / Genesis 11:1-6.

Bereshit / Genesis 11:1-6
11:1 Now the whole earth used the same language and the same words. 11:2 It came about as they journeyed east, that they found a plain in the land of Shinar and settled there. 11:3 They said to one another, ‘Come, let us make bricks and burn them thoroughly.’ And they used brick for stone, and they used tar for mortar. 11:4 They said, ‘Come, let us build for ourselves a city, and a tower whose top will reach into heaven, and let us make for ourselves a name, otherwise we will be scattered abroad over the face of the whole earth.’ 11:5 The Lord came down to see the city and the tower which the sons of men had built. 11:6 The Lord said, ‘Behold, they are one people, and they all have the same language. And this is what they began to do, and now nothing which they purpose to do will be impossible for them. (NASB)

Watch Dr. Duane D. Miller PhD Discuss What is the most...

Watch – Something called Topological Superconductivity – A new State of...