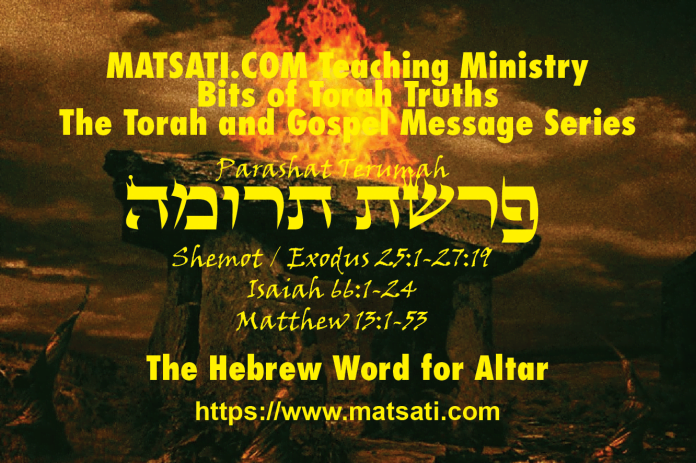 According to the Rabbinic literature, the Hebrew word for Altar (מזבח) is an acronym for four Hebrew words referring to forgiveness (מְחִילָה), merit (זכות), blessing (ברוך), and life (חיי). (Rabbeinu Bahya, on Shemot / Exodus 27:1)

The giving of the Torah at Sinai incorporated the giving of the altar to Israel. It is interesting how the rabbis speak of the altar being an acronym for forgiveness (מְחִילָה), merit (זכות), blessing (ברוך), and life (חיי). Since the sacrifice was such an important part of the ritual in the Tabernacle, what was the most significant sacrifice that was performed? The most essential sacrifice that was given upon the altar was the daily sacrifice called the korban tamid (קָרְבַּן תָּמִיד) which consisted of a defect free male lamb, unleavened bread, and wine. According to Bamidbar / Numbers 28:1-8, the Lord God calls this “My offering(קָרְבָּנִי), my bread (לַחְמִי)” indicating something about the sacrifice that the Lord God Himself is doing. The sacrifice foreshadows the coming of the שֵׂה הָאֱלהִים (Lamb of God) who would be made a sacrifice upon the altar that was not manufactured by human hands for the purpose of redeeming our souls (see John 1:29 and Hebrews 9:11-12). Note how the altar describes the life of the Messiah as obtaining forgiveness (מְחִילָה), merit (זכות), blessing (ברוך), and life (חיי). It is important to note how the very first sacrifice that was made in the Torah was offered by God Himself on behalf of Adam and Eve. (Bereshit / Genesis 3:21) Jewish tradition describes Adam building the first altar and offering sacrifices to the Lord as humanity’s first Cohen Hagadol (High Priest). In Bereshit / Genesis 4 we learn that Adam’s sons knew about the sacrifices indicated by the way in which Cain and Abel were described. Cain’s offering was rejected because it came from the fruit of the earth which was cursed. Abel’s was accepted because it was a blood sacrifice (see Beresthit / Genesis 4:3-5). The first occurrence of the word altar (מזבח) is after the flood in Bereshit / Genesis 8:20. Noah learned about clean and unclean animals, the sacrifice, and ritual from his forefathers. The concept of the sacrificed lamb appears with Moshe being commanded by God to make an offering in blood during Pesach (Passover) (Shemot / Exodus 12:1-28). The sacrifice of the lamb of God to make atonement on the doorposts led to the birth of the Jewish nation. It is interesting how faith in the blood of the lamb gives birth to an entire nation, to a people, a holy priesthood, a am segolah, a treasured people unto God! The sacrifice offered inspired repentance because of death, and life contained within one’s devotion to God. The sacrifice made it easier for man to draw near to the infinite God, and led to Israel staying away from idolatry. (Vayikra / Leviticus 17) The Torah is clear that blood (דָּם) is meant for atonement due to life being contained within the blood. The blood was used on the mezuzot (doorposts) of houses in Egypt so the firstborn child did not receive judgment with the Egyptians. The blood was later used to ratify the covenant made at Sinai (see Shemot / Exodus 24:8). The objects in the Tabernacle were also consecrated by the sprinkling of blood, including the priests (Shemot / Exodus 29:20-21, Hebrews 9:21). The Torah states according to Vayikra / Leviticus 17:11 that blood was used to make atonement for the soul. The holiness and sanctity of life is connected to the blood and sacrificial death.

The commentary Rabbeinu Bahya, on Shemot / Exodus 27:1 Part 3 asks the question, “what was the altar to atone for?” and answered saying “For the effrontery characterized by a ‘copper-hard forehead.’” The copper forehead speaks to a hardness to receiving, accepting, or living according to God’s ways. This may suggest something that is fashioned to stand against God (sin, rebellion) and the rabbis parallel this to the people who were stubborn and stiff necked. They say their stiff necks were like an iron sinew and a forehead of bronze meaning that they were unwilling to listen or move according to God’s word. Paul wrote that the wages of sin is death (Romans 6:23, 1 Corinthians 15:22) and the Torah and the Prophets tell us that the soul that sins will die (Bereshit / Genesis 2:17, 3:19, Ezekiel 18:4, 18:20). The holiness of God coupled to His justice requires that sin be punished, and death is represented by the shedding of blood upon the altar. The Torah describes how a faithful believer would bring a kosher animal to make atonement, placing his hands upon the head of the animal and confessing his sins, such that the animal and the man could identify with one another, and the death of the animal would be reckoned to the one who had sinned. (Vayikra / Leviticus 4:29) the life for life principle in the chatat (“sin offering”) or asham (“guilt offering”) was accepted by God based upon one’s faith. The Apostolic Writings teaches us how Yeshua came to die for our sins in a way to make atonement for our sins. The gospel message is found within the pages of the Torah, of God delivering His people, of sacrifice, of His presence dwelling in our midst. The sacrificial system draws us near, and Yeshua’s death is what makes us right with God, his sacrifice eternally draws us near to God in heaven. Because of this we may stand before God’s presence on the basis of the blood of the Messiah which was shed for our sins. Similar to what the Rabbis say in the Talmud Bavli Berakhot 17a we visualize going before the Lord, confessing our sins before God, and believing Yeshua bore in himself our iniquities. Here the blood is given as a means for the admission of our guilt before God, bringing a sacrifice, and receiving the forgiveness offered to us through the blood of the acceptable sacrifice. Studying the Scriptures, what we are taught in the Apostolic Writings is consistent with what we read in the Tanach, the Torah, and the Rabbinic literature. The blood of the Messiah Yeshua is called the blood of the everlasting covenant (דַם בְּרִית עוֹלָם) that cleanses us from our sins (see Hebrews 13:20, 1 John 1:7). We are told in the book of John, Yeshua is the logos (ὁ λόγος), the Word of the LORD (דְבַר־יְהוָה), the voice of God himself (John 1:1). The Word tabernacle, dwelled among us, and note how it was the voice of the word of God that spoke from over top the Ark of the Covenant (John 1:18). It is in many ways in which Yeshua is described in the pages of the Torah, and so just as the altar makes atonement, and in the meaning of the acronym of forgiveness (מְחִילָה), merit (זכות), blessing (ברוך), and life (חיי), Yeshua is the Lamb of God (John 1:29, 19:36, Shemot / Exodus 12:46, Isaiah 53:4-7) that suffered and died for our sins. He is the anointed one who come to bear our sins and his life represents the High Priest who intercedes on behalf of his people (John 17). He represents the glory of God (Hebrews 1, John 12:38-41) and His resurrection demonstrates the righteousness of God (John 20).

These things demonstrate the great love that God has for us. The name YHVH means “He exists,” and is a testimony in the Torah to the sustaining power of God, who rules, constrains, and directs the universe. His presence is what led to life itself, in the connection to the living (Chayim, חיים) which implies that true life cannot be lived outside of God’s love. This love, is illustrated in the sanctity of life, all life, in which the Hebrew word חיים having two consecutive yodes (יי) represents unity in plurality, this is drawn out from the Aramaic text with the HYVH being represented by the יי. The Lord is the Living God (Elohim Chayim, אֱלהִים חַיִּים) since we are brought to live through our remaining in Him. This is how we see the connection to the Altar, and sacrifice as having the meaning of forgiveness (מְחִילָה), merit (זכות), blessing (ברוך), and life (חיי) and of Yeshua, the שֵׂה הָאֱלהִים (Lamb of God), who takes away the sin of the world. Can you see how central the Torah by drawing together all of these concepts? Through Yeshua alone do we have the means for receiving eternal life. The Apostle John wrote in 1 John 5:12, “Whoever has the Son has the life (הַחַיִּים); but whoever does not have the Son of God does not have the life.” This is an eternal truth. This is how the Scriptures describe the love of God, and of man. This is how the Torah and the Gospel Message go hand in hand!