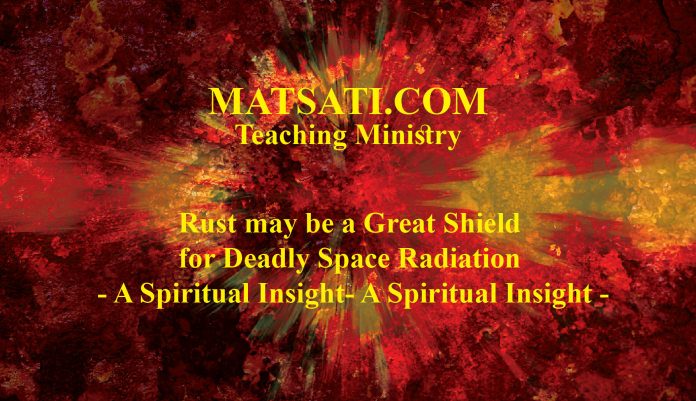 Cosmic radiation consists of high energy protons and atomic nuclei which move through space at near the speed of light. They are produced by the sun, from outside the solar system, and from distant galaxies. Data from the Fermi Space Telescope have suggested a large fraction of cosmic rays originate from supernova explosions of stars. The cosmic rays are of a particular interest in space due to the damage they inflict on electronic equipment and living systems (people, animals, etc). The ultra high energy cosmic rays have been observed to approach 3×10^20 eV, which is 40 million times the energy of particles accelerated by the Large Hadron Collider. Because cosmic rays are high energy and have the capacity to destroy electronic and living systems, this has become one of the challenges that needs to be solved for space agencies to send crewed missions to Mars or beyond. New research [1] suggests a layer of powdered rust may function as an effective shield for blocking these dangerous cosmic radiation.

Oxidized metal such as gadolinium(III) oxide, blocks more radiation by weight than anything else according to the research. [1] Conventional shielding materials such as lead, concrete, and aluminum, incur a high mass penalty which is not feasible for spacecraft designs. Others have suggested low mass polymers for shielding applications, or conformal coatings (Low-Z, low atomic number, coatings) to protect sensitive electronics are also proposed to protect against moisture, shock, and thermal gradients. Conformal coatings consist of hydrogen, carbon, and oxygen, and provide shielding from radiation with properties when the mass of the incident particle is similar to the target mass. [2] The lighter approach was to use a gadolinium rust to block the radiation without adding much more mass to the spacecraft. The researchers report in their publication the following:

In addition to this, researchers have suggested a composite material by incorporating heavy metal oxides into acrylic conformal coatings as a possible method to address the various radiation concerns in a single material design. High-Z (higher atomic number) materials however are costly as compared to the rusted counterpart suggesting an oxidized material may be both cost effective and lower in weight for improved shielding. The publication [1] evaluated the shielding effectiveness of a standard conformal coating which was saturated or partially saturated with metal oxide particles as a composite shielding material.

The Spiritual insights that we receive from this type of work is related to the Lord God Almighty being our shield and our protection according to the Scriptures. If we begin with the Hebrew aleph-bet, the fifteenth letter of the Hebrew aleph-bet appears when written as ס (print) o (cursive) and has the numeric value of 60. The pictograph image of the Samekh appears as a shield whereas in the Aramaic script it is circular in shape. According to the Midrashim, the Aseret HaDibrot (Ten Words, Ten Commandments) were written with the finger of God (see Shemot / Exodus 31:18) upon two stone tablets made of blue sapphire as being symbolic of the throne of God and of the heavens. Samekh means “to lean upon,” “to uphold,” or “to support.” This is part of the meaning of the laying on of the hands on the sacrifice “Then you shall bring the bull before the tent of meeting. Aaron and his sons shall lay (samakh) their hands on the head of the bull.” (י וְהִקְרַבְתָּ אֶת-הַפָּר לִפְנֵי אֹהֶל מוֹעֵד וְסָמַךְ אַהֲרֹן וּבָנָיו אֶת-יְדֵיהֶם עַל-רֹאשׁ הַפָּר) Here we find the letter Samekh has the components of transference of sins and atonement. Another Hebrew word נס (nes) means “miracle” which has led to the concept of the miracle of the Samekh. The letter nun represents someone who is bent over, brokenness, or of being bent over in prayer, and when putting these together, suggests that a person of faith is a walking miracle. The Lord God upholds (Samekh) the broken or humble one. Indeed, this is illustrated in the sense that God gives support to the fallen and broken ones who put their faith and trust in Him! Tehillim / Psalms 145 speaks of this as saying, “The Lord upholds all who are falling and raises up all who are bowed down.” (יד סוֹמֵךְ יְהֹוָה לְכָל-הַנֹּפְלִים וְזוֹקֵף לְכָל-הַכְּפוּפִים) The Lord Most High is our dwelling place, he is our shelter, our shield.

The rabbis wrote that Moses wrote Tehillim / Psalm 91 as he dwelt in the secret place (סֵתֶר) of the Most High God, in the “midst of the dark cloud” (Shemot / Exodus 24:18), a place of sacred and holy concealment. The one who abides in the secret place of the Most High dwells in peace and rest being protected from the world. We are told how God Himself hides in this world (Isaiah 45:15) therefore we are to seek his face in order to enter into His Holy presence. Note also what Yeshua told his disciples, he said, “To you it has been given to know the secrets of the kingdom of heaven, but to them it has not been given.” (Matthew 13:11) The secret place is what the Spirit says or speaks to us according to Isaiah 26:20 where Isaiah said, “Come, my people, enter your chambers, and shut your doors behind you.” This is the place of our heart, where we commune with God, we appeal to the presence of God which is hidden in our hearts by the Holy Spirit of God, which gives us guidance in our walk before Him! As the researchers are attempting to accomplish in the materials design for spacecraft to protect from cosmic rays the sensitive electronics and the preciousness of life, we are made secure on account of the Lord, our Savior, Yeshua, who gloriously ascended obtaining victory over this world, and the hidden principalities of darkness that seeks to steal, kill, and destroy. Yeshua the Messiah is the way, the truth, and the life, he is the door to the secret place, he is the means of our forgiveness and restoration through his sacrificial death on the cross. He is our shield, just as we learned in the letter Samekh, He is the one we “ lean upon,” the One in whom we place our trust, He is the One who “upholds,” and “supports” us. Because of Yeshua we have access to the Divine Presence in our lives, to God dwelling in our midst, to the Holy of Holies that is not made with human hands. He is our shield, our strength, our glory, and He is Master over all. Can you see the significance of this research leading us to these truths? Note how central the Torah is to all of these concepts!  The Psalmist wrote according to Tehillim / Psalms 91:1 saying, “He who dwells in the secret place of the Most High will abide in the shadow of the Almighty.” This is what it means to abide in Yeshua, to be attuned to the reality of the Divine presence in our lives according to the grace of the throne of God!

Tehillim / Psalms 70, Part 1, Those who seek instruction from...

Parashat Shemini, "Help me to sanctify Your Name Lord!"