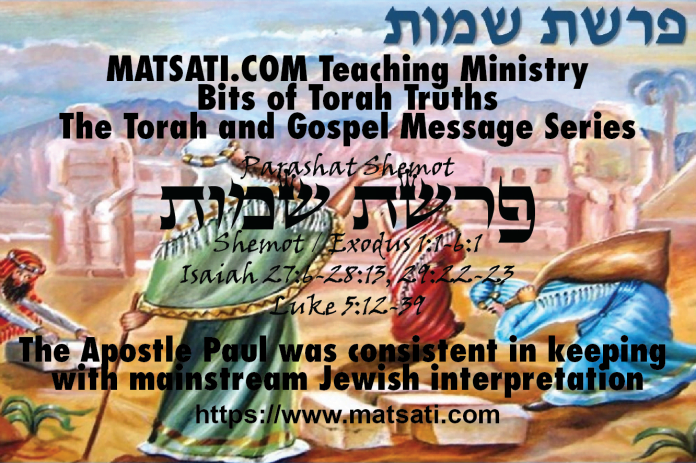 The book of Shemot / Exodus opens with the children of Israel being oppressed with forced labor. We are told even in the midst of their slavery; the Lord God prospered His people causing them to increase in numbers significantly. There being blessed in this way was a fulfillment of God’s promises to Abraham, Isaac, and Jacob. Something to note is how the Text states the more they were afflicted, the more they multiplied and spread out. Shemot / Exodus 1:11 So they appointed taskmasters over them to afflict them with hard labor. And they built for Pharaoh storage cities, Pithom and Raamses. 1:12 But the more they afflicted them, the more they multiplied and the more they spread out, so that they were in dread of the sons of Israel. 1:13 The Egyptians compelled the sons of Israel to labor rigorously; (NASB, יא וַיָּשִֹימוּ עָלָיו שָֹרֵי מִסִּים לְמַעַן עַנֹּתוֹ בְּסִבְלֹתָם וַיִּבֶן עָרֵי מִסְכְּנוֹת לְפַרְעֹה אֶת-פִּתֹם וְאֶת-רַעַמְסֵס: יב וְכַאֲשֶׁר יְעַנּוּ אֹתוֹ כֵּן יִרְבֶּה וְכֵן יִפְרֹץ וַיָּקֻצוּ מִפְּנֵי בְּנֵי יִשְֹרָאֵל: יג וַיַּעֲבִדוּ מִצְרַיִם אֶת-בְּנֵי יִשְֹרָאֵל בְּפָרֶךְ:) The way this is written, the Scriptures speak to us about the Lord God always remaining faithful to us as Paul wrote to Timothy, in 2 Timothy 2:13 if we are faithless, he remains faithful, for he cannot disown himself. (NIV) and the author of Hebrews wrote in Hebrews 10:23 Let us hold unswervingly to the hope we profess, for he who promised is faithful. (NIV) The idea is in this life we will see blessing along with persecutions and troubles. Here in Shemot / Exodus 1:11-13, it appears as if more “good” was given as a result of the people’s suffering. This suggests for us a future expectation on the concept of being placed in a refiner’s fire where our character is forged, molded, and shaped as God wills during our lives. We should not run from conflict, or from the problems that we face each day. These are meant to help us to grow in the Lord! King Solomon wrote something similar in Mishley / Proverbs 17:3 The refining pot is for silver and the furnace for gold, But the LORD tests hearts. (NASB) We also read something very similar according to Zechariah 13:9 and Isaiah 48:10.

Zechariah 13:9
13:9 And I will put this third into the fire, and refine them as one refines silver, and test them as gold is tested. They will call upon my name, and I will answer them. I will say, ‘They are my people’; and they will say, ‘The Lord is my God.’” (ESV)

Isaiah 48:10
Behold, I have refined you, but not as silver; I have tried you in the furnace of affliction. (ESV)

The Lord appears to work in this way for the purpose of creating within us something new. Due to hardship and persecutions, we take a closer look at our lives, and if there is sin, we repent and turn from ungodliness. I believe the reason for troubles and persecutions in life, the reason the Lord God allows them, is for the purpose of Teshuvah (Repentance) so we are brought back to our senses, and seek the help of the Lord God in heaven, and His Messiah Yeshua. Yeshua said in Matthew 10:22 10:22 ‘You will be hated by all because of My name, but it is the one who has endured to the end who will be saved. (NASB) This is an important principle, that of endurance, to persevere, to maintain the faith no matter what happens in life, always giving glory to God! This perseverance draws out the glory of God in our lives. The Torah for this week speaks of these things, providing for us a future expectation of suffering which is done in the service to the Lord. This is paralleled to what Yeshua said in John 15:18-25 15:18 ‘If the world hates you, you know that it has hated Me before it hated you. 15:19 ‘If you were of the world, the world would love its own; but because you are not of the world, but I chose you out of the world, because of this the world hates you. 15:20 ‘Remember the word that I said to you, ‘A slave is not greater than his master.’ If they persecuted Me, they will also persecute you; if they kept My word, they will keep yours also. 15:21 ‘But all these things they will do to you for My name’s sake, because they do not know the One who sent Me. 15:22 ‘If I had not come and spoken to them, they would not have sin, but now they have no excuse for their sin. 15:23 ‘He who hates Me hates My Father also. 15:24 ‘If I had not done among them the works which no one else did, they would not have sin; but now they have both seen and hated Me and My Father as well. 15:25 ‘But they have done this to fulfill the word that is written in their Law, ‘They hated Me without a cause.’ (NASB) The concept here is Yeshua telling us before hand to expect persecutions because of Him. If we are willing to stand with Yeshua, we will also be treated like he was treated. We are the children of God, and because of our faith and standing for the truth, for righteousness, holiness, and justice, we will be hated. The world will hate us for His Name sake. (John 15) Because we have joined ourselves with truth, and with the love of God, the world will hate us. Both the people of Israel, Moshe, and Yeshua lived as examples for us so that we can know, persecutions are temporary, therefore we are not to enjoy the pleasures of sin (Hebrews 11) but repent, and seek the Lord God in heaven for his mercy and grace.

This week’s Torah portion speaks of slavery, life, and death. Being in bondage to sin, and to a people and gods of a foreign nation. The Lord God Almighty delivered Israel from this situation in a very powerful way, and then brought Israel before the Mountain of Sinai giving the people His commands. When we consider God’s ways, He redeemed us, set us free, and delivered us from bondage to sin. He then gives us a blueprint for living in a righteous and holy way, to walk before Him all of the days of our lives. When we consider the commandments in the Torah, life and death are a big deal. Moshe wrote according to Devarim / Deuteronomy 30 saying, “Choose life” and saying “I have set before you life and death, blessing and curse. Therefore choose life.” The Apostle Paul wrote using this language of life and death and living for the Lord, attaining to the resurrection, to eternal life, the world to come, and to die either with or without the Lord. The gospel message is drawn out from this context in the sense that the commandments of God, Moshe’s speaks in Devarim / Deuteronomy 30 of maintaining our faith in the one true God, and believing in God’s anointed one, which leads us to the NT application of believing in the Messiah Yeshua, and the Lord God dwelling in our midst by sending His Spirit into our hearts to empower us to overcome the world. Paul speaks of the power of God to even bringing in the Gentiles to the faith, being blessed by God through the Messiah (Abraham’s seed). This is achieved by Paul making the statement in Galatians 3:11 he says no one is justified by the Law before God and then quotes “The righteous man shall live by faith” (Habakkuk 2:4) and then goes on in Galatians 3:12 to say “He who practices them shall live by them” (Devarim / Deuteronomy 30). He argues that the works of a person attempting to earn his salvation before God by the Law place a person under a curse and how Christ redeemed us from the curse of the Law. Paul was not saying the Law itself is a curse, but that we who live by God’s Torah will at times fail to remain faithful (we sin) and because of sin, our sins bring about the curse according to the Torah. The victory that we have is in God’s Messiah Yeshua, in repentance we turn from sin and renew our relationship with the Lord. The curse comes by not obeying (keeping) all of the commands. This is how Paul was consistent in keeping with mainstream Jewish interpretation by explaining Vayikra / Leviticus 18:5 as saying that if a person keeps the commands he will attain eternal life by them. Yeshua said something similar according to Matthew 19:17 and John 12:50. Paul is not teaching Law vs. Grace as is the classical Christian interpretation on these Scriptures from Galatians 3. Yeshua also quoted the same passage in Luke 10:28. Notice how the Talmud states something very similar.

Rabbi Meir interpreted this verse to mean that a person is not limited by ethnicity but all peoples may attain life through obedience, whether he is Jewish or not. This concept that one studies the Word of God is drawing near to the Lord God in heaven is extant from the time of antiquity! When one seeks God, he or she goes to God’s Word seeking His Righteousness, and His help in life. If a preacher teaches something different from this, don’t listen to his teaching. Like Paul, Rabbi Meir said both Jew and Gentile may attain life by obedience to God. This is a Talmudic example of the future expectation of both Jew and Gentile coming together by faith and worship, service, and praising God through the Messiah. Paul was not saying keeping God’s commands is the opposite of faith. He was not putting faith and the Torah in antithesis to grace and mercy and relationship in Galatians 3:11-12. Paul is saying that keeping God’s commands is part of what it means to be a man of faith, by explaining Vayikra / Leviticus 18:5 as saying that if a person keeps the commands he will attain eternal life by them.

We also see according to this week’s Torah portion (Parashat Shemot) the Lord God is also faithful, He remains faithful, even in the midst of our unfaithfulness. This is the Gospel Message the Lord God Almighty had spoken to Abraham of all the nations being blessed in him (in his seed). The point being drawn out from this week’s Torah portion is that no man is perfect in keeping God’s Torah. We need the substitutional atonement prescribed in the Scriptures for the forgiveness of our sins such that we may be justified before God. In this week’s Torah portion, we learn how God blessed Israel in the midst of her persecutions and troubles. The way God works in the midst of our troubles provides us with a powerful testimony that we are to take before all nations speaking of the blessings of God. In this week’s study we learn how evil is mixed with things in our lives that are good. In the midst of persecutions and hardships, we are to maintain the faith! We are to choose to walk in the good way, in the ways of righteousness, justice, holiness, and truth according to God’s Word in the midst of what the world throws at us. With the help of the Messiah (Yeshua) our Father in heaven dwells in our hearts by His Spirit (Holy Spirit) and empowers us to be overcomers of this world. These are the things just a couple verses from the Torah draw out for us teaching us how the Torah is an integral part of the Gospel Message!

Bits of Torah Truths, Parashat Pekudei, Do you believe we are...