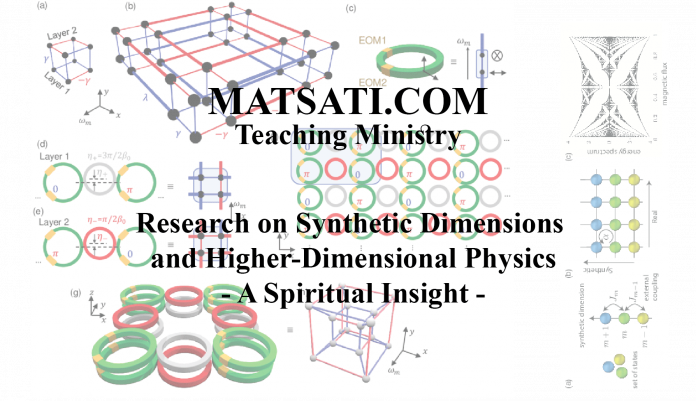 Researchers are taking the concept of synthetic dimensions and creating devices that are capable of experimentally studying higher-dimensional physics on lower-dimensional physical structures. The recent research [1] states “many branches of science are interested in this type of research, ranging from ultracold atomic physics to photonics. The ability to do so provides a versatile platform for realizing effective gauge potentials and novel topological physics that might be difficult or impossible to realize in real systems.” Reading through these comments on the state of the art science requires a few terms needing to be defined in order to understand what the scientists are talking about.

Synthetic Dimensions – The idea of a synthetic dimension is to take a material and cause it to simulate a spatial dimension such as length, width, or height, using a different property of the physical system. The point of such a device is to enable access to dimensions that are not usually possible in real life (3-D [x,y,z]), enabling the study of higher dimensions such as 4-D, 5-D, 6-D dimensional physics, etc. An example of such a device would be analogous to a lamp that can change its brightness like a continuous switch changes the brightness of light. If we have a switch that can continuously change the brightness, we could call it a synthetic dimension and characterize the system by its position in x, y, z and brightness space. The discretizing of synthetic dimensions in the quantum world is also possible and would suggest one could move to different discrete energy levels as a form of higher dimensional space, this is analogous to a lamp with fixed brightness settings. (i.e. using spin states in quantum mechanics, m = -3/2, -½, ½, 3/2, etc.)

Effective Gauge Potentials – In physics, gauge theory is a type of field theory in which the Lagrangian (Lagrangian mechanics) does not change (invariant) under local transformations from certain Lie groups (a group whose elements are organized continuously and smoothly, as opposed to discrete groups). The term gauge refers to any specific mathematical formalism to regulate redundant degrees of freedom in the Lagrangian. The transformations (gauge transformations) are analogous to symmetry group transformations. I think of this being analogous to rotating a molecule on its axis of symmetry in molecular spectroscopy. A particular choice of the scalar or vector potentials is a gauge (more precisely, gauge potential) and a scalar function ψ used to change the gauge is called a gauge function. The existence of arbitrary numbers of gauge functions ψ(r, t) corresponds to the U(1) gauge freedom of this theory. Gauge theories are important as the successful field theories explaining the dynamics of elementary particles such as “Quantum electrodynamics” being an abelian gauge theory. Gauge theories are also important in explaining gravitation in the theory of general relativity (quantum gravity).

Topological physics – Topological physics is related to physics in areas such as condensed matter physics, quantum field theory, and physical cosmology. Topology is concerned with the properties of a geometric object that are preserved under continuous deformations, such as stretching, twisting, crumpling and bending, but not tearing or gluing. A topological space is a set endowed with a structure, called a topology, which allows defining continuous deformations of subspaces, and, more generally, all kinds of continuity. Euclidean spaces, and, more generally, metric spaces are examples of a topological space. These concepts of topology go back as far as the 17th century. The motivation for studying topology is related to geometry. Some geometric problems depend not on the exact shape of the objects involved, but rather on the way they are put together. For example, the square and the circle have many properties in common, they are both one dimensional objects and both are closed systems meaning there is an inside part and an outside part, etc.  These are concepts of topological physics.

This field of research is important for optics, photonics, atomic, and quantum technologies. Optics and photonics are key technologies related to quantum optics, optomechanics, electro-optics, optoelectronics and quantum electronics. This technology is related to understanding the quantum world and connotes fundamental research that is needed to make quantum computing a reality. Photonics is used to describe the applied science of research and development. The fundamental research going into this technology allows for the engineering of materials and components at the nanometer and atomic scale and allows for the application of new ways of understanding and manipulating radiation-matter interaction. For example, the integration of chips on photonic devices allow for new forms of communication (networking). This research is involved in learning new ways to exploit the control of matter at the atomic level and the quantum mechanics that are involved that permit the development of devices for communication and energy production, etc.

The Spiritual Insights that we receive from this type of research are related to the concept of “synthetic dimensions” and “higher-dimensional physics” in the sense of salvation, transformation, and that there is a higher dimension to this world that meets the eye. This is illustrated in the concepts of life and death according to the Torah. Paul wrote when we seek to know God and His Messiah Yeshua, when we want the Lord God Almighty to be a part of our lives, we have spiritually changed from “death” to “life.” By faith we become dead to this world, to this age, to the olam hazeh, and we are awakened to the realm that transcends the dimensions of the carnal flesh. We no longer live according to the standards of this world, we have died to sin and so the power of sin no longer has control over our lives. This is the power of God in our lives to live for him. Paul wrote to the Philippians 2:13 for it is God who is at work in you, both to will and to work for His good pleasure. (NASB) What we see according to Paul’s words is those who love and serve the Lord have been transformed from the inside by God Himself.  This is an observable phenomenon in our lives, how the Lord God is working in us to do His will and service.

We are made alive to an entirely greater and more powerful dimension of reality.

Bits of Torah Truths, Parashat Bo, Is the Lord hardening your...