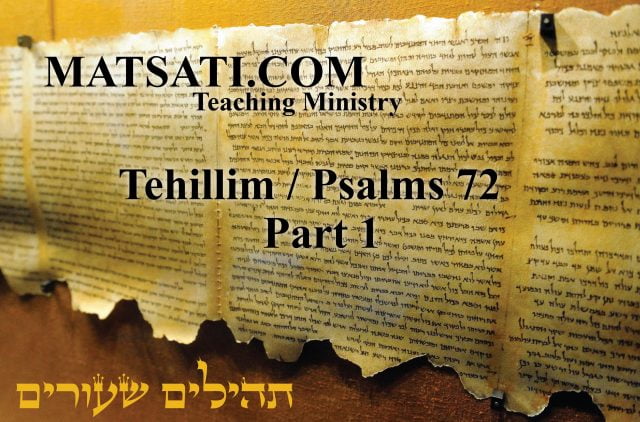 In this week’s study from Tehillim / Psalms 71:1-24, the psalm opens saying, א   לִשְׁלֹמֹה | אֱלֹהִים מִשְׁפָּטֶיךָ לְמֶלֶךְ תֵּן וְצִדְקָתְךָ לְבֶן-מֶלֶךְ:  A Psalm of Solomon. 72:1 Give the king Your judgments, O God, And Your righteousness to the king’s son. (NASB)  Is David asking the Lord to judge him and to forgive his son?  He continues saying, ב   יָדִין עַמְּךָ בְצֶדֶק וַעֲנִיֶּיךָ בְמִשְׁפָּט: ג   יִשְֹאוּ הָרִים שָׁלוֹם לָעָם וּגְבָעוֹת בִּצְדָקָה: ד   יִשְׁפֹּט | עֲנִיֵּי-עָם יוֹשִׁיעַ לִבְנֵי אֶבְיוֹן וִידַכֵּא עוֹשֵׁק: 72:2 May he judge Your people with righteousness And Your afflicted with justice. 72:3 Let the mountains bring peace to the people, And the hills, in righteousness. 72:4 May he vindicate the afflicted of the people, Save the children of the needy And crush the oppressor. (NASB)  What does David mean by “let the mountains bring peace to the people, and the hills in righteousness?”  David asks the Lord to help the people fear him as long as the sun and moon exist (72:5), to send His blessing upon them in rain (72:6), and that righteousness would flourish until the moon is no more (72:7).  It appears that David is asking the Lord to cause His blessing to fall upon his son Solomon saying, may he rule from sea to sea (72:8), that the nomads would bow before him (72:9), that the kings of the earth would bring him gifts (72:10-11), and states that his son will 72:12 “… will deliver the needy when he cries for help, The afflicted also, and him who has no helper.” (NASB) Read more here: Tehillim 72-Part1

For The First Time, Researchers Just Observed How Plants Take Up...