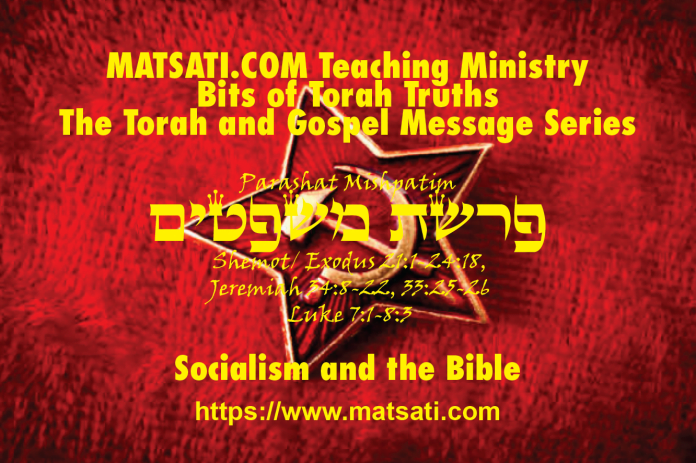 The opening verses from this week’s Torah portion begin stating the following in Shemot / Exodus 21:1-10 saying, וְאֵ֙לֶּה֙ הַמִּשְׁפָּטִ֔ים אֲשֶׁ֥ר תָּשִׂ֖ים לִפְנֵיהֶֽם׃ 21:1 These are the rules that you shall set before them: כִּ֤י תִקְנֶה֙ עֶ֣בֶד עִבְרִ֔י שֵׁ֥שׁ שָׁנִ֖ים יַעֲבֹ֑ד וּבַ֨שְּׁבִעִ֔ת יֵצֵ֥א לַֽחָפְשִׁ֖י חִנָּֽם׃ 21:2 When you acquire a Hebrew slave, he shall serve six years; in the seventh year he shall go free, without payment. אִם־בְּגַפּ֥וֹ יָבֹ֖א בְּגַפּ֣וֹ יֵצֵ֑א אִם־בַּ֤עַל אִשָּׁה֙ ה֔וּא וְיָצְאָ֥ה אִשְׁתּ֖וֹ עִמּֽוֹ׃ 21:3 If he came single, he shall leave single; if he had a wife, his wife shall leave with him. אִם־אֲדֹנָיו֙ יִתֶּן־ל֣וֹ אִשָּׁ֔ה וְיָלְדָה־ל֥וֹ בָנִ֖ים א֣וֹ בָנ֑וֹת הָאִשָּׁ֣ה וִילָדֶ֗יהָ תִּהְיֶה֙ לַֽאדֹנֶ֔יהָ וְה֖וּא יֵצֵ֥א בְגַפּֽוֹ׃ 21:4 If his master gave him a wife, and she has borne him children, the wife and her children shall belong to the master, and he shall leave alone. וְאִם־אָמֹ֤ר יֹאמַר֙ הָעֶ֔בֶד אָהַ֙בְתִּי֙ אֶת־אֲדֹנִ֔י אֶת־אִשְׁתִּ֖י וְאֶת־בָּנָ֑י לֹ֥א אֵצֵ֖א חָפְשִֽׁי׃ 21:5 But if the slave declares, “I love my master, and my wife and children: I do not wish to go free,” וְהִגִּישׁ֤וֹ אֲדֹנָיו֙ אֶל־הָ֣אֱלֹהִ֔ים וְהִגִּישׁוֹ֙ אֶל־הַדֶּ֔לֶת א֖וֹ אֶל־הַמְּזוּזָ֑ה וְרָצַ֨ע אֲדֹנָ֤יו אֶת־אָזְנוֹ֙ בַּמַּרְצֵ֔עַ וַעֲבָד֖וֹ לְעֹלָֽם׃ (ס) 21:6 his master shall take him before God. He shall be brought to the door or the doorpost, and his master shall pierce his ear with an awl; and he shall then remain his slave for life. וְכִֽי־יִמְכֹּ֥ר אִ֛ישׁ אֶת־בִּתּ֖וֹ לְאָמָ֑ה לֹ֥א תֵצֵ֖א כְּצֵ֥את הָעֲבָדִֽים׃ 21:7 When a man sells his daughter as a slave, she shall not be freed as male slaves are. אִם־רָעָ֞ה בְּעֵינֵ֧י אֲדֹנֶ֛יהָ אֲשֶׁר־לא [ל֥וֹ] יְעָדָ֖הּ וְהֶפְדָּ֑הּ לְעַ֥ם נָכְרִ֛י לֹא־יִמְשֹׁ֥ל לְמָכְרָ֖הּ בְּבִגְדוֹ־בָֽהּ׃ 21:8 If she proves to be displeasing to her master, who designated her for himself, he must let her be redeemed; he shall not have the right to sell her to outsiders, since he broke faith with her. וְאִם־לִבְנ֖וֹ יִֽיעָדֶ֑נָּה כְּמִשְׁפַּ֥ט הַבָּנ֖וֹת יַעֲשֶׂה־לָּֽהּ׃ 21:9 And if he designated her for his son, he shall deal with her as is the practice with free maidens. אִם־אַחֶ֖רֶת יִֽקַּֽח־ל֑וֹ שְׁאֵרָ֛הּ כְּסוּתָ֥הּ וְעֹנָתָ֖הּ לֹ֥א יִגְרָֽע׃ 21:10 If he marries another, he must not withhold from this one her food, her clothing, or her conjugal rights. (Sefaria) One of the things we think about regarding slavery is how Israel had just been delivered from brutal enslavement from Egypt, and the first mitzvot (commands) we read about are related to laws of servitude. The opening verses say כִּ֤י תִקְנֶה֙ עֶ֣בֶד “when you acquire a servant.” This is astounding, when Israel had spent the last few hundred years as slaves that there is the command to take Hebrew slaves. One would have thought the idea of master and servant would be loathsome. Israel’s experience with slavery was reprehensible, unhealthy, and even inhumane, yet the Lord God commanded that six years of service is to be done and no more. In addition to this, the Lord God commanded that a servant can never be humiliated or degraded, and the Jewish rules of servitude are commanded to be humane. The Talmud states that “Whoever owns a servant has acquired a master. If there is only one pillow in the home, the master must give it to his servant.” (Talmud Bavli Kiddushin 20a) The reason slavery continued to exist was because of the imperfections of this world, people owe money, they must work to pay off debt, etc.

The one thing we do not find in the Torah is socialism as a form of lifting one out of debt. One must work for their keep, to earn money and get out of debt. (see Devarim / Deuteronomy 8:18) History bears out how men who have a lust for power have afflicted many people due to their godless philosophies of communism, socialism, and fascism. These ideologies have led to the deaths of more people in the last 100 years than in all the religious conflicts in the history of the world combined. The 20th century was the bloodiest in human history, with over 260 million people murdered by political movements. These ideologies also suppress the truth of the Scriptures, and regard people as nothing but animals to be exploited. Today however, regardless of what we know historically about socialism and communism, there are people who believe this is a desirable form of government regardless of how it has demonstrated otherwise in history.  Some people have even made the claim that the early Christian community described in Acts 2-5 where it states “all things in common” was a description of socialism. Socialism is a system under which the government owns the means of production and through coercive taxation and wealth redistribution allocates resources and makes decisions over property, prices, and production. The economic system of socialism abolishes the right to private property and gives to individuals based on their need. The Scripture that is laid claim to these things is in Acts 2:44-45 which states, “all those who had believed were together and had all things in common; and they began selling their property and possessions and were sharing them with all, as any might have need.” The text goes on to say in Acts 4:32-35, “not one of them claimed that anything belonging to him was his own; but all things were common property to them … For there was not a needy person among them, for all who were owners of land or houses would sell them and bring the proceeds of the sales, lay them at the apostles’ feet; and they would be distributed to each as any had need.” These Scriptures sound like some of the language of socialism is here, but this is only a superficial reading until we think a little more about the context of the verses. Something to note, the early believers did not sell “all” of their possessions! They did not give up their right to private possessions. The phrases of “selling their property” and “all things were common property” have different meanings. Note how the believers continued to meet in their own homes, so they did not sell their homes, or all of their property. The text also says “from time to time those who owned land or houses sold them and brought the money from the sales” (Acts 4:34) Notice how this is a voluntary thing. Under the socialism system of redistribution, one would be obligated and not voluntary. Another example is taken from Barnabus (Acts 4) as a positive example and the negative example of Ananias and Sapphira (Acts 5). In Barnabus’ case, this was not the giving of “all” his possessions, and it was not controlled by the state. Barnabus saw the need, and he was led by the spirit to give. In Ananias and Sapphira’s case, they lied in order to give the perception of giving a lot of money, and pretended to give more than they actually did. Peter explicitly states “when it was unsold it was your own” and after it was sold, it was “under your control” (Acts 5:4). This means they had the right to do with the money as they pleased!  The problem, as Peter points out, was that Ananias and Sapphira had “lied to the Holy Spirit” (Acts 5:3). They had “lied to God” and not “to men” (Acts 5:5). The descriptions given in Acts 2-5 are drastically different than socialism. Nowhere does the Bible describe a system of socialism as a form of government!

The idea of freedoms and liberty enter into the picture when discussion of socialism and communism occurs. People want freedom of speech, a constitutional right, but do not want the responsibly of speaking truthfully. This is illustrated by the false news narratives that are occurring today across the internet, and in the news media on television. The Torah however states that we are accountable for every word we speak and no license is given to harm someone by the words we say (abuse of others by our words, see Matthew 12:36-37) Bamidbar / Numbers 30:2 states, “If a man makes a vow to the LORD, or takes an oath to bind himself with a binding obligation, he shall not break his word (לא יַחֵל דְּבָרוֹ), but he shall do according to all that proceeds out of his mouth.” We are told here how important our words are, we are not permitted to break the sanctity of our words. The word יַחֵל is from the word חל meaning to regard something as common, insignificant, or profane. The phrase “Dibbur emet” (דַּבְּרוּ אֱמֶת) is the Torah’s way of saying that we have a duty to speak the truth as the people of God. Only truthful words are powerful and significant and have real meaning and strength. Untrue words may be consigned to hell. Our modern culture devalues the significance of our words, and uses language as a powerful tool for political, social, and societal control in order to manipulate appearances. This is what is called “deception, untruth, a lie, etc.” True speech is holy (kadosh) and sacred, which draws us back to holiness in thought, and action as being a part of God’s people according to the teachings in the Torah. (Note, the Torah teachings are expanded upon in the NT too.)

Take for example from the Torah on the creation account from the Targum Onkelos.

Notice how God gave Adam the ability to think, to speak, and to reason according to Targum Onkelos. The way this is written, the breath of life that has been given by God is directly linked to our speech, the ability to reason, and to have a conversation (a discoursing spirit). Considering Lashon Hara (לָשׁוֹן הָרָה) this tarnishes the image of God in which we were created. The reason being, one who uses Lashon Hara uses his words to hurt others. This is why metzorah (the affliction of Tzaraat) was regarded as one who has this affliction is considered as dead, and there is a need for a direct miracle of God to restore one to life (i.e. rebirth, and resurrection). The words we say affect both the physical and spiritual realm. When we consider our words, they are derived from the thoughts of our heart, and lead to the course of life (lead us in the direction we choose to go). All of these things are related back to the Torah portion on slavery. The commands given in the Torah are to be kind and respectful to a man who had the need to cause himself to enter into slavery in order to pay off his debt. Socialism was not the way out. There is always the need to work hard.  In fact, we are told according to Devarim / Deuteronomy 8:18 that our ability to work with our hands is given by God such that He can bless us according to the covenant He had made with Abraham, Isaac, and Jacob! It is very sobering to realize these truths come directly out of the Torah to illustrate how our attitude is to be, to work, to take care of family, to have forgiveness and mercy towards others no matter where they are in life! These are powerful spiritual truths, and we need to be mindful of the power and sanctity of not just our words, but of our actions, and even of our giving to help others, because our lives are meant for the building up and helping one another! (Ephesians 4:29) May the Lord God of Israel help us take every thought “captive” to the obedience of the Messiah, thereby enabling us to always behold and express the truth of God’s unfailing love according to His Word!

Parashat Kedoshim, The First Fruits of Death and the Zavakh Shilamim...

Bits of Torah Truths, Parashat Chayei Sarah, Being a Man of...

4 Signs You’re Infected with a Parasite – A Spiritual Insight