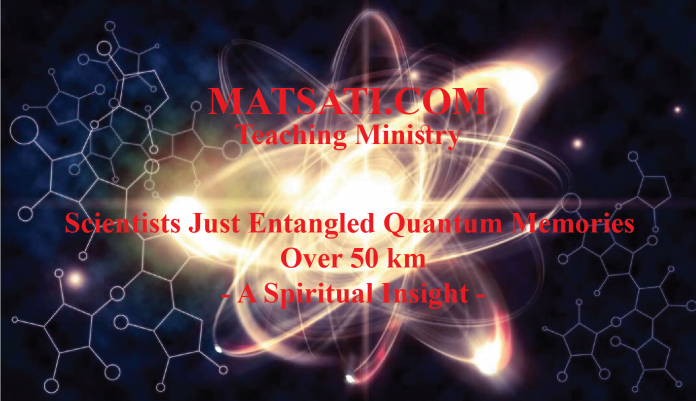 One of the things scientists are attempting to achieve is to develop a secure-quantum internet that is unhackable. Recently, Scientists have managed to develop a quantum memory that is entangled over 50 kilometers (31 miles) of fiber optic cables, and this research was published in the Journal Nature. [1] This is approximately 40 times the previous recorded distance. Quantum entanglement occurs when two particles become inextricably linked. This means whatever happens to one particle, immediately affects the other, regardless of the distance between the particles. For example, two photons of light can be entangled such that for a brief moment they share physical states. It was Albert Einstein that made quantum entanglement famous. John Stewart Bell however helped define quantum entanglement and established a test known as the “Bell inequality” in order to confirm true quantum entanglement.

In the paper published in the Journal Nature, [1] Scientists were attempting to create a quantum memory. Quantum memory is the quantum equivalent of classical random access memory (RAM) in a conventional computer. Memory allows for the ability to store information and then access that information at a later time. In the quantum world however, difficulty arises when quantum fluctuations occur, which may change the state of the memory and thus far has made quantum computers impractical. In order to get to the stage where quantum computers are actually practical and useful, developing fixed quantum memory is absolutely important! The significance of this research was in the ability to extend the entangling distance using optical fiber between quantum memories to distances that span the average city (31 miles). In the recent past, quantum particle entanglement has been accomplished over optical fibers at greater distances, even doing so from outer space to earth. [2] The difference here is in developing a quantum memory, requiring the entanglement to maintain its state (a fixed state) making the process much more difficult. The researchers worked on quantum entanglement memory by including atomic matter to improve the efficiency, reliability, and stability of the memory. This suggests the system is not a “pure” quantum entanglement, but incorporates a network of nodes. The quantum memory consisted of rubidium atoms that were cooled to a lower energy state, and then coupled with entangled photons which then become a part of the entangled system. Something to note, the greater the distance entangled photons travel, the greater likelihood leading to a change in state before reaching its destination. The paper describes an enhancement effect that was achieved by a technique called “cavity enhancement” which reduces photon coupling loss during entanglement. The process of enhancement occurs by placing the quantum memory atoms into special rings that reduce random noise that could interfere and destroy the memory. Cavity enhancement also improves the retrieval of the quantum information. The coupled photons and rubidium atoms make up a node. The photons were converted to a frequency suitable for transmission across existing telecommunications networks. In the test conducted, the quantum memory source and destination were located in the same lab, but were transmitted across 50 km of fiber optic cable.

The advantages of using quantum memories included faster processing speed, and solving more difficult problems which would take conventional computers much longer to accomplish. Quantum technology promises to improve transmission speeds, secure data, and provide reliable ways to communicate over long distances. A quantum internet can connect quantum processors and thus enable new applications, and the capability of distributed quantum computing, etc. This kind of technology will require the entanglement of remote quantum memories over long distances, and the current research takes us one step closer to the realization of this capability!

The Spiritual insights we receive from this type of research is found in the way in which the photons require the help of the rubidium atoms to maintain a state. A parallel is found in a couple of ways, (i) in how we need the help of God to live for Him and walk in His ways, and (ii) how we need the community of believers, to help one another, to encourage one another, to build up one another, and to become stronger in the Lord by helping a brother to maintain his faith. Emunah (אֱמוּנָה) occurs first in the Torah in reference to Abraham in relation to God. Emunah (faith) is connected to truth and justice, and provides a foundation for social standards and norms of the community. Faith is a mode of existing, and when Abraham was tested with the Akedah, he was willing to give up rational thought in order to obey what God had commanded. The authors of the NT described Abraham as believing that God could do the impossible. (Matthew 17:20, Luke 1:37) We read in the Scriptures that Abraham was declared righteous because he trusted that God would fulfill his promise (John 8:56). The Torah was given to teach us about the holiness of God, and to help us to understand the inward condition. If we consider the scientific research of a photon being transmitted across long distances, due to the random (quantum) fluctuations, there may be a change of state between one point and the next. There is a huge parallel here to our lives, we have the desire to walk in God’s ways, however, as we continue in this life, our walk before God may fluctuate due to the flesh. The need is for a way to couple our walk to something that provides a surety that will keep us on the narrow path. This is the Spirit of God that is given (the Holy Spirit) which helps us to walk in the Spirit according to God’s word due to the sinfulness of the flesh. This is why Paul wrote what he did in regards to Abraham saying, “For the promise to Abraham and his offspring that he would be heir of the world did not come through the law (Torah) but through the righteousness of faith.” (Romans 4:13) Our ability to walk in the way of truth is found in our seeking by faith God’s help to overcome the world. This was why He sent his Son Yeshua to die for our sins, such that both Jew and Gentile can partake in the family of God as “the children of Abraham” and be partakers of the blessings (Galatians 3:7-9). The Torah was given such that we would have knowledge of sin, which would then lead us to repentance and faith. (1 Timothy 1:8-11) It is by the Torah that we realize (recognize) our need for God’s salvation!

The concept of Torah (God’s instruction) is connected to truth, trust, and community. In the Tannaic literature, Israel is praised for its joyful acceptance of the kingdom of heaven at Sinai, that is the rule of God in their lives. According to Bamidbar / Numbers 27:22 וַיַּעַשֹ מֹשֶׁה כַּאֲשֶׁר צִוָּה יְהוָֹה אֹתוֹ “Moshe did as the Lord God commanded him” is explained as meaning he obeyed the Word of the Lord with joy. The phrase “Torah Lishmah” (Torah for its own sake) is found to express the importance of the Torah as a means to human expression of love for God by the rabbis, for the sake of the Torah (for its own sake). In Christianity however, the law of God and love are often taught as opposing opposites. This was not the view Yeshua took, he kept the whole Torah while living a life of love. This is the truth about the Torah illustrated in the Ve’Ahavta (וְאָהַבְתָּ, “Love the Lord with all your heart”) the greatest command that is coupled with loving others. (Vayikra / Leviticus 19:18) This draws in the Torah as being an essential part of the community of God. The Torah teaches us how Love involves helping another person, and this is of tremendous significance (see Devarim / Deuteronomy 22 and Matthew 22:36-40). From these things we understand that we are to believe that God exists, and is a personal, loving, and accessible God, and that we are to love others in truth, justice, and righteousness. It is literally impossible to fulfill these commands, these two commands, without a genuine spiritual rebirth and newness of life (חַיִּים חֳדָשִׁים) in Yeshua the Messiah. This is what Paul proposes, that those who are in the flesh cannot please God (Romans 8:8). As to the community of faith, one is in need of the other, just as in the photon needing the rubidium atom to maintain its quantum state, a faithful believer needs the community of believers, God’s Word, and literally the presence of God in his or her life ( we need a personal relationship with God!). Tehillim / Psalms 1 and 119 speaks to the impact of faith and praise in the life of the community of faith. These Psalms are filled with expressions of love, delight, and joy in the Torah, following in the footsteps of God by walking in His ways.

The opening word in the book of the Psalms is אַשְׁרֵי (ashrei) meaning happiness and blessedness. Literally אַשְׁרֵי-הָאִישׁ “the blessedness/happiness of the man” draws in and incorporates many things according to the Torah and all of the Tanach. This encompasses the material bounty, of peace from our enemies, tranquility, and of resting in trusting in God and His promises. The first verse in the Psalms speaks of the blessing or happiness of a man who does not walk in the negative expression of the ungodly or sinners. The person who delights in the Torah of God meditates in His Word day and night. (Tehillim / Psalms 1:2) The Torah has traditionally been taken as a delight, joy, and happiness, from the Jewish context. Paul uses this context to reinforce the concept that the Torah draws us to God, to seek the forgiveness of our sins, and to the Messiah for God’s atonement. In rabbinic literature there is the expression “simcha shel mitzvah” (שמח של מצוה) “the joy of the commandment” which speaks of the requirement that commandments should be carried out with happiness and joy. The reason this is possible is by the presence of God literally dwelling in our midst, in our hearts, through the Holy Spirit! The application of genuine faith in the Lord enters into the community of believers through the greatest commands. This is not a trivial nor inconsequential thing. This is part of what it means to “seek first the kingdom of God and His righteousness…” (Matthew 6:33) Faith causes us to invest in seeking God’s presence in our lives, and trusting in Him in all His ways (Mishley / Proverbs 3:5-6). David wrote according to Tehillim / Psalms 27:8 When You said, ‘Seek My face,’ my heart said to You, ‘Your face, O Lord, I shall seek.’ (NASB, ח לְךָ | אָמַר לִבִּי בַּקְּשׁוּ פָנָי אֶת-פָּנֶיךָ יְהֹוָה אֲבַקֵּשׁ) This is a response to the great Shema, God calling us to hear His voice, and we acknowledging his call by asking Him to divinely help us to hear his call. Note the connection to the research on the photon needing the help of the rubidium atom to maintain its quantum state. These are the things that are drawn out from the scientific research (the spiritual insight)! The Lord God calls out to us, we seek his help, we rest in His Spirit by in His presence in our lives, and the Lord God gives us healing and peace, and most of all, we maintain our state through divine interaction!

Bits of Torah Truths, Parashat Shelach Lecha, The Fear of the...