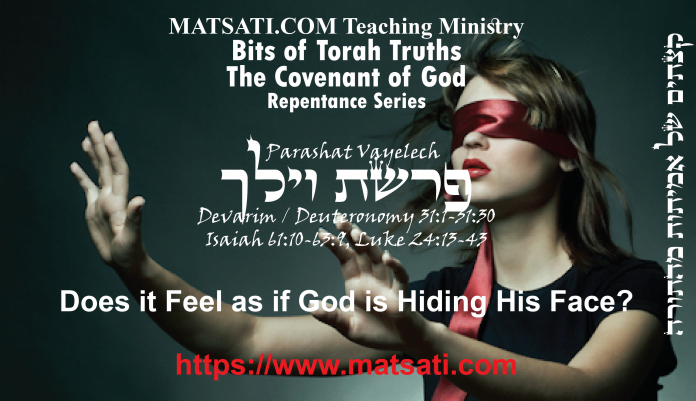 This week’s Torah portion (Parashat Vayelech) speaks of the final days of Israel in the wilderness and just before they entered into the Promised Land.  This week we are looking at Devarim / Deuteronomy 31:14-18.  In this section of Scripture, the Lord God Almighty is speaking and tells Moshe to commission Joshua, transferring his authority over to him.  The Lord then describes how the people  are going to disobey God and His commands and give themselves over to worship the gods of the nations. Following this section of verses, Moshe composes a song (in Parashat Haazinu) and gives this song to the people.  The Lord tells the people that after having sinned and given themselves over to the ways of the nations, 31:17 Then My anger will be kindled against them in that day, and I will forsake them and hide My face from them, and they will be consumed, and many evils and troubles will come upon them; so that they will say in that day, ‘Is it not because our God is not among us that these evils have come upon us?’ 31:18 But I will surely hide My face in that day because of all the evil which they will do, for they will turn to other gods. (NASB)  Note how because of their sins, many things would happen to the people, the most significant of which the Lord God will turn his face away from them, even to hide His face from them in their time of trouble, even when they recognize that these things come because God is not in their midst.  Taking these things into consideration, are you sitting here this morning as one who feels forsaken by God?  Have you sought the will of God and found it to be evasive?  Have you prayed and found your prayers to be ineffective and seemingly coming back in your face?  Have you looked at your life and examined your heart and you honestly believe there is no gross sin in your life?  You believe you are sincere and willing to do God’s will, yet when you come to God, it is as if He has turned His back on you and has hid His face from you?  This week’s Torah portion provides us with some insights into these troubling times.

Devarim / Deuteronomy 31:14-18
31:14 Then the Lord said to Moses, “Behold, the time for you to die is near; call Joshua, and present yourselves at the tent of meeting, that I may commission him.” So Moses and Joshua went and presented themselves at the tent of meeting. 31:15 The Lord appeared in the tent in a pillar of cloud, and the pillar of cloud stood at the doorway of the tent. 31:16 The Lord said to Moses, “Behold, you are about to lie down with your fathers; and this people will arise and play the harlot with the strange gods of the land, into the midst of which they are going, and will forsake Me and break My covenant which I have made with them. 31:17 Then My anger will be kindled against them in that day, and I will forsake them and hide My face from them, and they will be consumed, and many evils and troubles will come upon them; so that they will say in that day, ‘Is it not because our God is not among us that these evils have come upon us?’ 31:18 But I will surely hide My face in that day because of all the evil which they will do, for they will turn to other gods. (NASB)

Based upon these verses, the major reason the Lord God hides His face is due to His people taking upon themselves the way of the nations.  One reason God may seem hidden today, based upon Parashat  Vayelech, is the simple act of willful, unrepentant sin.  “Then they will cry out to the LORD, but he will not answer them. At that time he will hide his face from them because of the evil they have done” (see Devarim / Deuteronomy 31:18 and 32:20, Micah 3:4).  We read in the Apostolic Writings that without faith it is impossible to please God (Hebrews 11:6).  However, one might say, “but I do have faith!”  In the Scriptures, many times we read about God appearing to people, performing amazing and undeniable miracles, speaking audibly (just as in this case here in Parashat Vayelech), and many other things that we do not often witness today.  Why do you think this is?  Why was God so willing to reveal Himself and help His people in Biblical times but seems “hidden” and silent today? Sometimes people miss hearing from God because of a refusal to believe that He is able to do so even today. (see Mark 6:1-6)  Today one of the major theological fallacies is the teaching of dispensationalism which teaches God does not work miracles today because we have the completion of the scriptures, and all we need are the scriptures for faith and salvation.  The underlying presupposition is that some how miracles caused one to have faith (not true, look at the religious leaders in Yeshua’s time) and/or that God was “proving” Himself to his people (as if the Lord needs to prove Himself).

According to the Scriptures, the Lord God sometimes tells His people, “You cant inquire of Me.”  Th Scriptures do speak of times when God “hides” his face, or “turns” his face away from his people, just as He said He would in Parashat Vayelech.  This is typically an act of discipline or judgment, where God pulls back, experientially, from his people such that they would sense their need for his mercy, turn from their sins, and seek him anew (Devarim / Deuteronomy 31:17 and Tehillim / Psalms 27:9).  This is why the psalmists (David) cries out, “How long will you hide your face from me?” (Tehillim / Psalms  13:1) The prophet Daniel in Daniel 9:3-20 found himself and Israel in exile in Babylon, taken away from the temple and their homeland, and in need of God’s help.  Daniel said, “Then I turned my face to the Lord God, seeking him by prayer and pleas for mercy with fasting and sackcloth and ashes.”  This seeking involved fasting, earnest prayer, and pleading for mercy, all while mourning over and confessing sins.  These things occurred due to their many years of unrepentant sin and idolatry.  In today’s culture, do we see anything that runs in parallel to what was happening in the days of Israel prior to the Babylonian exile?

Many things today could be considered a form of idolatry in this modern world.  In addition to this, what we find going on today on a massive world wide scale, is the spiritual, political, and emotional implication of forcing Scripture to say something other than what it says, through appeals to linguistic cultural subtleties. This is another way of saying that someone is being “politically correct” in their words, actions, and thoughts.  For example, the Bible condemns all forms of homosexual, transsexual, or LGBT behavior.  Progressives today believe it is OK to reject the straight forward commandments of God on the basis of the authority of experience.  One of the foundations of both Judaism and Christian belief is that our God is a God who reveals himself and His will for us in the Scriptures, and that the Scriptures can be trusted absolutely.  Today however on an ever increasing scale, almost everyone, culturally, politically, and consequentially spiritually have given way to an emotional experiential faith which supersedes God’s Word.

Have you given way to an emotional experiential faith?

Would an emotional experiential faith cause one to hear from God?

Today we are being bombarded with messages that there is no higher purpose or authority than ourselves.  The biblical testimony is much more complex than this.  David and His son Solomon say the following:

What these scriptures teach us is that we are capable of being deceived, and God’s Word is to be our guide.  This means that our world and our lives are infused with spiritual meaning and purpose.  This is illustrated in Paul’s words to the Ephesians when he speaks about marriage, he parallels this to the Messiah and his bride, the people of God.  The Lord God’s eternal purpose for us as His creations, as individuals (human beings), as families, and as communities are to manifest His image and to be His representatives to a lost and fallen world.  Our struggle with righteousness and holiness are an integral part of what it means to be human.  The fundamental question that we need to be asking ourselves is “what is at the core of my identity?”  The message that comes from the world today is on sexual orientation as the core of one’s identity.  This message is not just about having issues with the LGBT and God’s Word.  The problem goes much deeper than this.  The problem today is the spiritual, political, and emotional implications of forcing Scripture to say something other than what it says which appeals to the flesh, to this world, and to our modern culture.

Is it surprising there is the feeling that God is hiding His face if we are forcing Scripture to say  something other than what it means (setting ourselves up as our own authority)?

God’s Word calls us to a different way of thinking, calling us to radical obedience to His word, so much so as to become something different, to become something totally new, which only occurs by the help of God and His Spirit dwelling in our lives.  All of us face the bible-based fundamental challenge of reforming our identity into the Messiah.  This is connected to the questions of what God made us to be, what is our purpose, and how do we serve God?  The overarching teaching of Scripture is that we are called to become like the Messiah (like Christ), and that calls us on a journey of self-sacrifice.  We are not called to the path of least resistance.  This would be the way of conforming our lives, our values, our beliefs according to the cultural norm.  NO!  We are called to a very difficult task, to a life that images the character of God, to reforming our identity from living in the flesh, to living in the Spirit, and conforming our lives to God’s Holy Word!  The Lord God Almighty and the gift of His presence in our lives offers us the opportunity to grow into the person that He wants us to become.  When we consider the words of the Psalmist in Tehillim / Psalms 119:105 of the word of God being a “lamp to the feet,” consider in the ancient world, the best that one could do to get light to see by was an oil lamp or a torch.  Consider the analogy of climbing a treacherous mountain path by only the light of a small lamp with the possibility of death on every side.  This is the way that we walk in this world, filled with sin, and treacherous on either side to cause us to fall into sin and rebellion.  What we need is a guide to tell us where next to put our feet.  This is what the Lord God Almighty has done in sending His son Yeshua the Messiah to guide the way, such that when we believe in Him, we are set free from the bondage to sin and freed to pursue righteousness and holiness according to God’s Word.