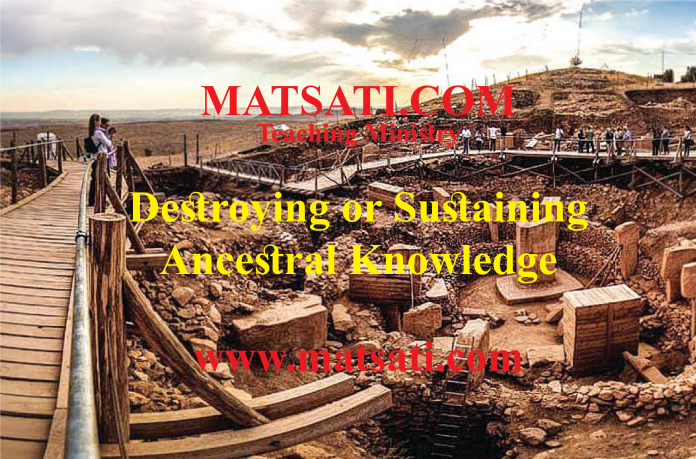 Recently I read an article concerning Bighorn sheep and Moose, the study said that both Bighorn sheep and Moose learn to migrate from one another.  When they die, that generational or ancestral knowledge is lost.  The article goes on to describe how in the 1800s there were many Bighorn sheep where stories describe over 1000 sheep could be readily seen on the mountains in Wyoming.  The bighorns population were decreased by disease and hunters.  By the year 1900, the species numbered in the low thousands as compared to the millions in the past.  In the 1940s, the Wyoming Game and Fish department began trying to move bighorns back into their historic habitats.  They say these efforts have been successful at restoring the herds, but not to their previous numbers.  With the restoration of the herds, their bodies (numbers) have returned, but their knowledge has died in relation to their original migratory patterns.  It is said that in the beginning, these herds of Bighorn sheep would migrate for miles and miles along the mountains in the early spring as new plants and foliage began to grow as they moved north.  They would learn the best routs from previous generations.  The article quotes saying:

“The translocated animals were literally let out of a livestock trailer and started looking around at their new environment,” says Matthew Kauffman from the University of Wyoming. “And they almost entirely failed to migrate.”

Researchers know this because the animals were fitted with radio collars in order to track their movements.  The study showed that those herds in their natural locations (where they grew up) between 65 to 100 percent migrated.  Those herds that were transplanted, less than 9 percent migrated.  They also used satellite images during the growing season to track how the Bighorn sheep tracked the emerging plants in the spring time.  They found the transplanted herds failed to track the greenery as well as the older herds. The conclusions on ancestral knowledge that is passed down, the article states:

That knowledge allows the animals to find plants early, when they’re young, tender, and more easily digested. And by eating high-quality plants, they can more easily pack on the fat and protein that gets them through harsh winters. “When they lose that knowledge, their populations will suffer,” Jesmer says.

Wildlife conservation isn’t just about raising the numbers on a population count. It’s also an act of cultural preservation. When rangers stop poachers from killing an elephant matriarch, they’re also saving her memories. When conservationists preserve routes over which bighorn sheep can travel, they’re keeping the animals’ traditional knowledge alive for future generations.

The article states that cultural losses are more difficult to see than the disappearing habitats or even declining populations. The article goes on to describe how conservationists having recognized these problems, have tried to modify the environment in order to help the species, such as modifying fences, creating overpasses, and minimize construction, housing, and development along the migration pathways.

What is interesting is how this study provides us with a significant insight into the biblical and rabbinic life, and especially for the application of God’s Word to our lives.

It is important to note how cultural losses are more difficult to observe for these animals.  For modern societies, this might also be true too.  The idea of creating fences to help was the underlying principle the Sages took to make “protective fences” to the Torah.  The rabbinic concept was that this was part and parcel of the Torah, and was not considered extra. (The Sages do however specify that their fences are rabbinic in nature, to avoid confusion with the written Torah law.)  One well known example is related to what the Torah states, “Do not boil a kid in it’s mother’s milk.”  On a Torah level, this only refers to meat from the three domesticated animals, a cow, a goat, and a sheep.  However, since people “intuitively” associate chicken as “meat,” one also does not mix chicken and milk.  This “rabbinic fence” was accepted by the entire Jewish people as binding law. If we are able to appreciate the severity of transgressing the Torah (a sensitivity which has, unfortunately, been lost to many people today), similar to the significance of what is happening with the ancestral knowledge of Bighorn sheep, then we can understand why these kinds of fences were considered vital to the rabbis.

I believe what these things teach us is in regards to the high calling that we have as the people of God, and for shaping our children to know the Lord God in heaven, His Messiah Yeshua, and loving others.  These things are illustrated in Solomon’s words calling out to his son to know wisdom, and instructing us to raise our children to know the Lord, according to the book of Proverbs.

Mishley / Proverbs 1:5-16
1:5 A wise man will hear and increase in learning, And a man of understanding will acquire wise counsel, 1:6 To understand a proverb and a figure, The words of the wise and their riddles. 1:7 The fear of the Lord is the beginning of knowledge; Fools despise wisdom and instruction. 1:8 Hear, my son, your father’s instruction And do not forsake your mother’s teaching; 1:9 Indeed, they are a graceful wreath to your head And ornaments about your neck. 1:10 My son, if sinners entice you, Do not consent. 1:11 If they say, ‘Come with us, Let us lie in wait for blood, Let us ambush the innocent without cause; 1:12 Let us swallow them alive like Sheol, Even whole, as those who go down to the pit; 1:13 We will find all kinds of precious wealth, We will fill our houses with spoil; 1:14 Throw in your lot with us, We shall all have one purse,’ 1:15 My son, do not walk in the way with them. Keep your feet from their path, 1:16 For their feet run to evil And they hasten to shed blood. (NASB)

As we saw in the Scientific study on the migration patterns of Bighorn sheep and the lost of ancestral knowledge, we as parents are called to actively devote or commit our children to a well defined path to knowing God.  This course of action includes reading God’s Words to them and living our faith in love before God and in the manner in which we are to sacrificially love others.  We are to help our children to understand the importance of living our lives for the glory of God because of His saving power and the great worth worth of drawing near to Him.  The concept of “to train” illustrates the importance of consecrating our lives to moral and ethical living for God’s Glory and for His name.  Just as these species transmitted their migratory knowledge for the health of the children, we too have the responsibility to pass on to our children the knowledge of God, and to direct our children towards the Lord God Almighty in mercy, and truth, and righteousness.  What we learn here from the animal kingdom, just as we learn in Mishley / Proverbs 22:6, that we are to have intentional, sustained, and God dependent shepherding of our children as they grow in the Lord to adulthood.  This is not just a passive calling for parents.  We are to be active, intentional, and continually glorifying the Lord, and this is one of the ways that we do so for the spiritual health and life not just of our children, but also of our communities!

What We Need to Know about the New Covenant, פרשת נשא,...