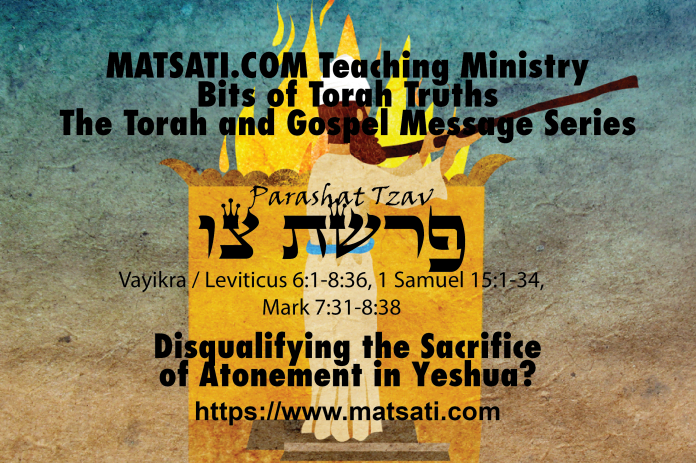 In this week’s Torah Portion, Parashat Tzav, the Lord God instructs Moshe, Aaron, and his sons on the sacrifices. The Torah states in Vayikra / Leviticus 7:1, א וְזֹאת תּוֹרַת הָאָשָׁם קֹדֶשׁ קָדָשִׁים הוּא: 7:1 And this is the instruction of the guilt offering it is a holy of holies. (NASB) Here the Hebrew text states הָאָשָׁם קֹדֶשׁ קָדָשִׁים הוּא “the guilt offering is a holy of holies.” The question this presents for us is, “What makes an offering to God holy?” Is it the altar? Is it the way it was brought? Is it the Tabernacle? Is it the priest? Or is it found in the way we obey God’s Word (the Scriptures) according to the detailed instructions that are laid out in the Torah? When we consider the word Kedoshim (קָדָשִׁים) meaning “the holy one’s” this draws in the idea that God has made us holy by separating us from the world and drawing us near to Himself. This is also drawn out in Parashat Kedoshim which speaks on the instruction (laws) of holiness and ethical behavior. The Lord God makes us holy through His Word, for example, in Parashat Kedoshim we find a repeat of the ten commandments, and the description of the penalties for sexual transgressions. When we obey God’s Word we separate ourselves from the way of the world. Therefore, what makes something holy unto the Lord is the setting of something apart for the Lord and doing so according to His Word (His instructions). The halakhot on the offerings comprise a significant portion of the Torah. In addition to this, in Judaism, the Mishnah on Kodashim, there is an entire six orders of the Mishnah and Talmud devoted to these matters. The significance of the sacrificial service in the Temple is so great that the Sages have said that it is one of the pillars upon which the world stands (see Pirkei Avot 1:2). Although the offerings ceased with the destruction of the Temple, they are still significant and central in Judaism and the book of Vayikra / Leviticus has a lot to teach us about holiness and living for the Lord! The offerings were meant to facilitate drawing near to God and receiving forgiveness. All the types of offerings, despite the many differences between them, manifest the close relationship between man and his Creator. In the concept of drawing near due to the sacrifice, the innocent life that takes our sins, this is how the Apostolic Writings say we are brought near to God by faith in Yeshua the Messiah.

In the Torah text that we have read thus far, three times the punishment of excision is stated with reference to people eating holy sacrifices in a state of bodily uncleanness. Entering into a state of ritual purity on the outside (physically) is not difficult. Obtaining this on the inside is what is most difficult and not possible without the help of God! This is synonymous to the unrepentant soul who thinks that he is partaking in a heavenly blessing by faith, while continuing to live a life of unfaithfulness to God and His Word. This is a very significant thing we are discussing here today! In the teaching on bodily uncleanness, Yeshua refocused us to the impurity of the heart and the need for atonement through repentance, faith, and sacrifice! There is a great significance in these things because they are related to the Lord God working in our lives, and our striving for His righteousness. If we teach people once saved always saved, or perpetuate this false doctrine by teaching it is true, there is the chance of leading someone right to Hell after a long life of assumption their words were enough to get them into heaven. The unrepentant life is a clear indicator that something is wrong on the inside (intrinsically), and that either one does not truly believe in the One the God of Israel has sent to save us from our sins. There is a very broad application to this teaching today, because it may directly be applied to those who accept LGBT as a way of life and claim they have the salvation of God by faith in Yeshua the Messiah. Note how most all Christian denominations accept this as truth today, that one who practices LGBT may go on practicing LGBT because all he or she must do is believe in Yeshua. This unrepentant lifestyle is an uncleanness on the inside that disqualifies the sacrifice of atonement in Yeshua. This is what the Author of the book of Hebrews was saying in Hebrews 10, “there is no longer a sacrifice for atonement for those who after knowing the truth continue to sin.” These are the reasons why the doctrine of once saved always saved is a great error! This is also why the Torah is a “must have” for God’s people to take the time to study and know what God wants for our lives. It is within this Hebraic way of thought that the Torah and the Gospel Message go hand-in-hand!

Parshiot Tazria and Metzora, The Messiah revealed in the Mitzvot on...

Faith that is Upside-down is One Outcome of Theology, ישעיהו יד:כב-לב...