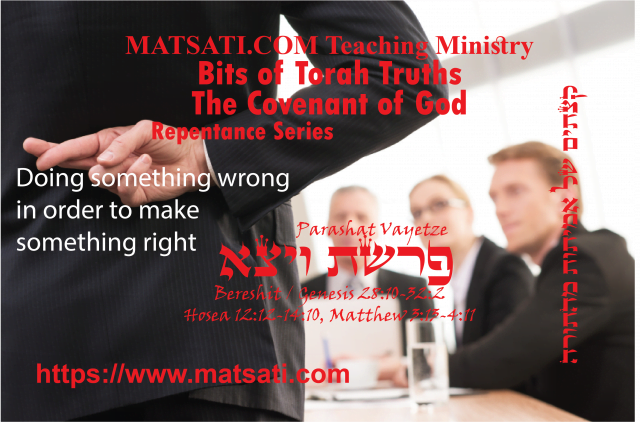 At the end of Parashat Toldot we read, in Bereshit / Genesis 28:6, וַיַּ֣רְא עֵשָׂ֗ו כִּֽי־בֵרַ֣ךְ יִצְחָק֮ אֶֽת־יַעֲקֹב֒ וְשִׁלַּ֤ח אֹתוֹ֙ פַּדֶּ֣נָֽה אֲרָ֔ם לָקַֽחַת־ל֥וֹ מִשָּׁ֖ם אִשָּׁ֑ה בְּבָרֲכ֣וֹ אֹת֔וֹ וַיְצַ֤ו עָלָיו֙ לֵאמֹ֔ר לֹֽא־תִקַּ֥ח אִשָּׁ֖ה מִבְּנ֥וֹת כְּנָֽעַן׃ 28:6 When Esau saw that Isaac had blessed Jacob and sent him off to Paddan-aram to take a wife from there, charging him, as he blessed him, “You shall not take a wife from among the Canaanite women,” (NASB) Abraham blessed Jacob knowing full well he had stollen his brothers blessing. Rashbam on Bereshit / Genesis 28:6 Part 1 states the following, וירא עשו כי ברך יצחק את יעקב – בברכות אחרונות הללו נתן לו את ארץ כנען שניתנה לאברהם וגם אמר לו לקחת אשה ממשפחתו וגם צווהו שלא לקחת מבנות כנען, חשב עשו בלבו מה שנשאתי מבנות כנען גזל ממני ברכת אברהם ולקח את בת ישמעאל ממשפחת אברהם, חשב בלבו שמא מעתה אזכה לנחלת אברהם. וירא עשו כי ברך” יצחק את יעקב, Esau realized that in the blessings which Yitzchok had given Yaakov the land of Canaan as his heritage had been included, and that Yitzchok also had given Yaakov specific instructions to get a wife from amongst the daughters of Laban, the brother of his mother, and on no account to marry a local Canaanite girl. Esau therefore arrived at the conclusion that he had been deprived of his share in the land of Canaan as a penalty for having married Canaanite girls and that this was the reason why Yaakov had been successful in stealing the blessing of Avraham from him. He therefore decided to marry into Avraham’s family, i.e. a descendant of Ishmael. He thought to himself that perhaps by doing this he would restore his claim to Avraham’s heritage.” Rashbam may be giving Esau the benefit of the doubt by seeking to marry into the blessings of Abraham through his children (Ishmael). Rashbam states Esau saw that Isaac had blessed his brother and in his dad’s specific instructions he was not to take a wife from the people of Canaan. Was this how he justified marrying the daughters of Ishmael? The interesting point is Esau did not understand the word of the Lord or the covenant the Lord desired for His people. Esau was essentially doing something wrong in order to make something right due to his past mistakes. Because he did not know or understand the Word of God, the effect was to cause further harm in his relationship with his family and with God. How often do you think this happens today due to not understanding the word of the Lord or the covenant? I feel this is a major problem in the sense of the teaching of a doctrine only as opposed to teaching what is taught in Scripture. Most assume all one has to do is have faith. The one thing that is not taught is the importance of faithfulness and how this effects our relationship with the Lord and our prayers being answered. We can see according to Tehillim / Psalms 66:18, if believers “regard wickedness” in their hearts, then the Lord will not hear their prayers. In other words, the Lord will not answer their prayers. However, when we pray for forgiveness and are repentant, the Lord hears and forgives. Sin hinders prayer. James also tells us in James 4:3 that wrong motives also hinder prayer. Mishley / Proverbs 1:28-29 tells us the Lord God will not answer those who hate His knowledge and do not fear him. The person who willfully abides in sin is not choosing to fear the Lord. The Lord will not hear him and his prayers will be hindered. These things are connected to doing something wrong in order to make something right as Esau is demonstrating marrying the daughters of Ishmael. Is it possible to live in unfaithfulness and not even know it?

Parashat Pesach: What does the pagan festival Easter have to do...