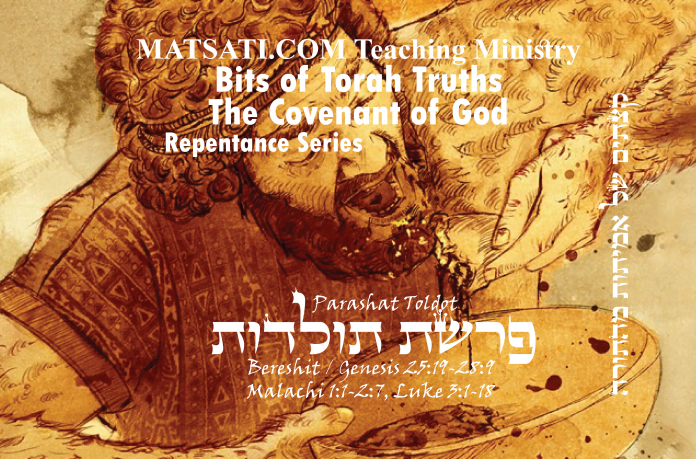 In this week’s Torah portion we read the following, וַֽיִּגְדְּלוּ֙ הַנְּעָרִ֔ים וַיְהִ֣י עֵשָׂ֗ו אִ֛ישׁ יֹדֵ֥עַ צַ֖יִד אִ֣ישׁ שָׂדֶ֑ה וְיַעֲקֹב֙ אִ֣ישׁ תָּ֔ם יֹשֵׁ֖ב אֹהָלִֽים׃ 25:27 When the boys grew up, Esau became a skillful hunter, a man of the outdoors; but Jacob was a mild man who stayed in camp. וַיֶּאֱהַ֥ב יִצְחָ֛ק אֶת־עֵשָׂ֖ו כִּי־צַ֣יִד בְּפִ֑יו וְרִבְקָ֖ה אֹהֶ֥בֶת אֶֽת־יַעֲקֹֽב׃ 25:28 Isaac favored Esau because he had a taste for game; but Rebekah favored Jacob. (NASB) The Scriptures describe Esau as a skillful hunger, and Jacob as one who stayed at home. It is interesting how Ibn Ezra describes Esau in the connection to being a skillful hunter in His commentary (Ibn Ezra on Bereshit / Genesis 25:27 Part 1) saying, “‘Knew the hunt.’ [Esau] was always full of deception, for most wild animals catch [their prey] using deception. But Jacob was the opposite of Esau because he was a ‘plain man.’ Esau was also a “man of the field.” And Jacob ‘stayed in the tents.’ And it seems likely that its meaning is like ‘those who dwell in tents and amidst herds.’ (Gen. 4:20)” Ibn Ezra draws out this point of being a skillful hunter as one who is full of deception just as the wild animals who hunt are deceptive in order to capture their prey. Isaac is said to have loved Esau because of his skill as a hunter and the taste of the wild animals. Isaac loved Esau because of his ability for the hunt, which is described as deception. Jacob on the other hand “dwell in tents and amidst herds” provides us with the context of study then leading and teaching others. Jacob did not receive this kind of love from his father because he was a man who stayed at home. Note also when Jacob grew up as a man, he became known as one who deceived. Was Jacob wanting to be like his older brother or was he seeking the favor of his father Isaac? His ability to deceive was prophetically spoken of when we read in the Scriptures of his being born holding his twin brother Esau’s heel, and his name is explained as meaning “holder of the heel” or “supplanter.” (see Bereshit / Genesis 27:36 Then he said, “Is he not rightly named Jacob, for he has supplanted me these two times? He took away my birthright, and behold, now he has taken away my blessing.” And he said, “Have you not reserved a blessing for me?” NASB) Jacob twice deceived his brother of his rights as the firstborn son. Rashi on Bereshit / Genesis 25:27 Part 1 goes on to explain Jacob and Esau in the following way saying, “ויגדלו… ויהי עשו AND THEY GREW … AND ESAU WAS — So long as they were young they could not be distinguished by what they did and no one paid much attention to their characters, but when they reached the age of thirteen, one went his way to the houses of learning and the other went his way to the idolatrous temples (Genesis Rabbah 63:10).” Note how Rashi claims it is only when one gets old that it becomes clear who a person is by their character. Sforno on Bereshit / Genesis 25:27 Part 2 also writes, “יושב אהלים, the plural mode indicates that the Torah speaks of two distinctly different kinds of tents; one is the tent used by shepherds, the other the tent described asבַּל-יִצְעָן described in Isaiah 33:20, (a reference to Jerusalem or the Temple). The function of that “tent” is to help people come closer to G’d and to gain insight into His ways and as a result to become holy, inspired by His glory.” The idea here is Jacob chose to remain in the tent to study, to gain insight, and to draw nearer to the Lord God of Abraham, and to slow down and purpose his heart to walk in God’s ways. The difficulty however is the deceptive life is not walking in the ways of the Lord. Jacob’s deception may be described as desiring the things of the world. Giving place to the flesh as opposed to the things of the spirit, holiness, righteousness, and truth. In our lives as God’s people, these are the things we must watch out for, there is a struggle between the flesh (Esau) and the spirit (Jacob), and to what extent we are willing to give to one verses the other. This will determine who we are in our devotion to the Lord.

Atonement outside of sacrifice?