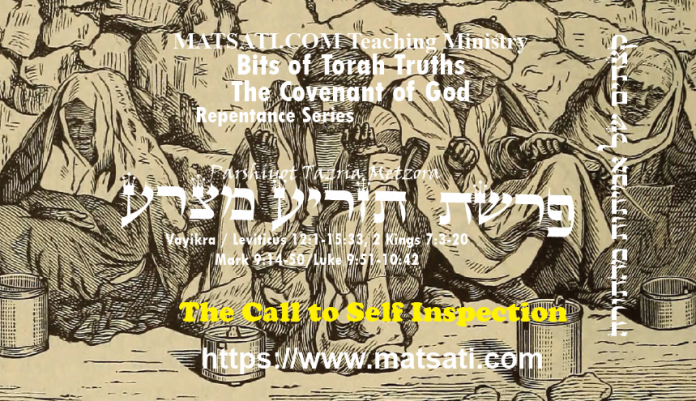 Rashi is answering the question following the eighth day of his being pronounced clean implies that this day, the eighth day from when the birds were brought, he is pure. However, it is on the eighth day that one brings the birds for the offering, after which he is pronounced clean. Read carefully here, Rashi is saying it is eight days after the birds were brought that is considered the purification. (Seftei ChaKhamim on Vayikra / Leviticus 14:23 Part 1) Note the parallels to the eighth day brit milah and the child entering into the covenant of God’s people. The Scriptures say “On the eighth day of his cleansing, he shall bring a lamb of guilt…” Notice how Rashi does not explain anything at this point and the reason being, it says earlier “He must remain, outside of his tent, for seven days.” This disease has significant physical and spiritual implications and thus causing the man to remain outside for seven days prior to his entering back into the community of God’s people. Note the severity of the disease of Tzaraat. It begins with little nodules which go on to ulcerate. The ulcers develop a foul smelling discharge. The eyebrows fall off, the vocal cords become ulcerated and the voice becomes horse, the breath wheezes and the hands and feet ulcerate. Slowly the human body becomes a mass of growing ulcers. The average length of this type of Tzaraat is 9 years ending in mental decay, coma, and death. There is damage that occurs to the nervous system loosing sensation in the hands and feet. The muscles waste away, tendons contract, with the ulcerations follows the progressive loss of fingers and toes until the entire hand and foot drops off. The duration of this type of Tzaraat is 20-30 years. The disease of Tzaraat is a progressive death where a man dies inch by inch and is often called “Hansen’s disease.” This disease is a good illustration for the nature of sin as sin slowly eats away at a person leaving him in a progressively worse condition as time goes on when one does not seek God’s help. Note the Torah portion also mentions “He shall live alone; his dwelling shall be outside the camp.” This person is put under judgment ceremonially, relationally, and even down to the core of his being. His clothes are rent in response to the fact of mourning over the death that has made a home in his life and body. He is defiled because he is unclean and further he must live outside of relationship and fellowship with man and God. There is no fellowship between the one with Tzaraat and the company of the people of God. This is the illustration of sin in our lives. Now when the miraculous happens, when the Lord God Almighty sets a man free from sin, in the Torah portion from Tzaraat, he is declared clean by the lamb of God and fellowship is restored in the two birds. This fellowship with the people and with God include the gifts of the animal sacrifices which are brought the guilt offering, the sin offering, the meal offerings, all of these offerings are described just prior to this text in order to stress the fact that there also must be fellowship with God. And so the gifts that are mentioned here are the gifts that make it possible for not just the one with Tzaraat to have communion with God, but also for all those who are stricken by sin to have fellowship with the Lord God as well. And so the imagery we receive here of the one stricken with Tzaraat, this person who was dead, defiled, out of fellowship with men and God, is now through a miracle of God made clean, and through the atoning his life and relationships are established. He is set free from sin and death. These things led to the apostolic interpretation on the significance of the lamb of God being offered for the cleansing of the one with Tzaraat which describes each and every one of us. Yeshua the Messiah is described within this context on the miraculous and atoning work of God. This is why we have recorded in the Apostolic Writings, a man full of leprosy coming to Yeshua and begged on his knees, “If you are willing, you can make me clean…” It is in this way Yeshua is described as the lamb of God (John 1:29) who takes away the sins of the world. There are important parallels between this week’s Torah portion and ourselves in the Messiah Yeshua! The rabbis taught sin leads to Tzaraat. We read in the Torah portion, “and the priest shall take one he lamb, and offer him for a trespass offering, and the log of oil, and wave them for a wave offering before the LORD: A trespass-offering.” This is to teach us that sin was the cause of Tzaraat, and of all diseases, and that these ceremonial observations had a farther meaning, that is coupled to our relationship with God and His Messiah, which is to set us free not just from sin but also from all of our sicknesses and our diseases!