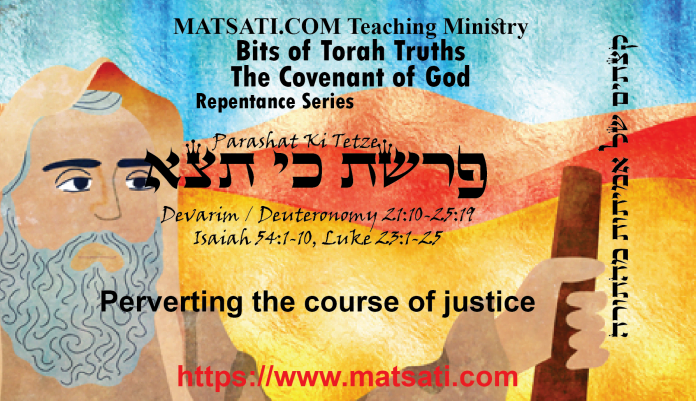 Perverting the course of justice is a serious crime. According to the Torah, Justice is logical, legal, and ethically defined.  Justice is not about getting even or experiencing spiteful joy in retaliation.  Instead, it is about correcting what is wrong which God calls moral culpability. But in today’s culture, is this what we are being taught?  Collins Dictionary of Law (© W.J. Stewart, 2006) states that “Perverting justice is the crime of interfering with public justice which carries a maximum penalty of life imprisonment and an unlimited fine. It does not matter whether or not the acts actually result in the course of justice being perverted. The prosecution must show that a course of public justice has been commenced, such as an event from which it can reasonably be expected that an investigation will follow; or investigations which could bring proceedings have already started and are in progress; or proceedings of some kind have been started, or are about to be started.”  Notice how justice requires that an investigation has already begun and that proceedings to prosecute the crime has also already begun. When the Lord calls for His people to live with righteousness, justice, and truth, he does so within the context of moral responsibility for someone else.  This is illustrated within the context of “Loving your Neighbor.”  Let’s look at what the Torah has to say concerning these things.

Justice begins with being fair and considerate of others. This is illustrated in the Torah as not oppressing your fellow man. This form of justice is significant especially in light of sin, how a son is not to be put to death for the sins of his father. (24:16) Mercy is also demonstrated by the way one harvests his field. Leaving some for others to glean so that they may live, God wants us to have this kind of love and caring for others, and the Scriptures says this is done “in order that the Lord your God may bless you in all the work of your hands.” (24:19) Perversion on the other hand, Webster’s dictionary defines as “a diverting from the true intent or purpose; a change to something worse; a turning or applying to a wrong end or use.” Note how anything can be spun and perverted. For example, money can be used for evil as opposed to being used for good,  Opiates for non-medicinal purposes, is a perversion of drugs for pleasure and sin as opposed to being used for pain relief prescribed by a doctor. In the Bible, the word translated “perversion” is used to define a deviation from righteousness. The bible says this can include a deviation in sexual behavior (Vayikra / Leviticus 18:23, Romans 1:27, Ephesians 4:19, Colossians 3:5), in speech (Mishley / Proverbs 10:31), or in justice (Ecclesiastes 5:8). In each case, God warns us against using these things for evil as opposed to using them for good according to His intended us.

The evil one is an expert at perversion.  Everything that God created which was good, the evil one twists for unrighteousness.  The best example for this is in our sexuality; in the beginning God called it good in Bereshit / Genesis 1:28 and 9:1.  What we see today is a perversion of sexuality that is found in LGBT, gender fluidity, and many more types of perversions that are too numerous to mention.  According to the Scriptures, the concept of sexual union had a dual purpose: (i) for procreation (Bereshit / Genesis 1:28 and 9:1), and (ii) the joining in marriage where two people become “one flesh.” (Bereshit / Genesis 2:24, Mark 10:8, 1 Corinthians 6:16). From since the earliest of days, man has found ways to perform sexual sin.  The perversions were so wide spread, the Torah describes at the time of Noah, the level of wickedness as so great that the sons of God took from any woman as they chose in Bereshit / Genesis 6.  Even though the Lord God destroyed this earth and all those evil men by water, sexual perversions increased and by the time God gave the Torah to Moshe He gave commandments against specific perversions such as homosexuality (Vayikra / Leviticus 18:22 and 20:12-13) , against bestiality (Vayikra / Leviticus 18:23) and not sleeping with your fathers wife (Devarim / Deuteronomy 27:20). According to the Torah, any sexual activity outside the marriage of one woman and one man is a perversion that is condemned by God (1 Corinthians 6:18, Hebrews 13:4, 1 Thessalonians 4:3). The Apostle Paul lists sexual perversions that were very prevalent in the Greek culture such as homosexuality, adultery, and fornication, stating that those who practice such aberrant behaviors “will not inherit the kingdom of God” (1 Corinthians 6:9–10, Galatians 5:19–21).

In addition to this, King Solomon had a lot to say concerning those who pervert speech. We are told that God created our tongues in order to build each other up (encouragement) and to praise God, and to speak the truth (Tehillim / Psalm 19:14, 120:2, 141:3, Mishley / Proverbs 12:22). A perversion of speech occurs when one uses their words for evil purposes, such as for swearing, coarse joking, lying, and being mean to others (Mishley / Proverbs 10:18, 12:22, 16:27, Ephesians 5:4). Within this context the Apostle Paul wrote in Ephesians 4:29 saying, “Do not let any unwholesome talk come out of your mouths, but only what is helpful for building others up according to their needs, that it may benefit those who listen.” He also wrote in Colossians 4:6 saying, “Let your speech always be with grace, as though seasoned with salt, so that you will know how you should respond to each person.” (NASB) According to the Apostolic Writings, Yeshua said in Matthew 15:11 that perversion is what occurs in the heart “What goes into someone’s mouth does not defile them, but what comes out of their mouth, that is what defiles them.”  All of these things can effect the perversion of justice.  We are told in the Torah that God hates the perversion of justice using examples against the widows, the fatherless (orphans) and the stranger (Shemot / Exodus 22:22, Devarim / Deuteronomy 27:19, Isaiah 1:23). Sometimes because of God’s mercy and His long suffering (Shemot / Exodus 34), it is difficult to understand how He is a God of justice.  The Lord God commands His people, and all of mankind, to be just towards all peoples.  King Solomon wrote in Mishley / Proverbs 11:1 “The LORD detests dishonest scales, but accurate weights find favor with him.” Man however due to sin chooses to seek his own interests at the expense of others.  This is the definition of injustice towards others. The way in which injustice may come is through greed (money, bribes) (Mishley / Proverbs 17:23), oppressing the poor (Amos 5:12), killing the innocent (Shemot / Exodus 23:7), and bearing false witness (Shemot / Exodus 23:1, Mishley / Proverbs 19:5). The Lord God Almighty loves justice, and godly people, those who love to do justice as well.  The Lord desires for His people to stand up for justice and to actively defend those who are being oppressed (see Isaiah 1:17, Micah 6:8).

This is the way of this world, and the works of the evil one, to take what God has called good and pervert what God has created.  This world seeks to entice God’s children from the truth, to dive head long into mental illness, a world of twisted lies and ideas and truth facilitating bondage in sin.  The evil one’s desire is to cause God’s people walk in a perverse heart, and in doing so, he leads God’s most cherished creations contrary to and perverting the image of God we are supposed to reflect. (1 Corinthians 11:7)  Man was created in the image of God (Bereshit / Genesis 1:27) and in doing so we were created to reflect His glory and His testimonies unto all the world.  This world teaches that sin, perversions of sex, the mouth, and of the heart, etc equals freedom.  The truth is the perversion of the truth only leads to bondage to sin and death. (Romans 2:5–8, 2 Peter 2:19). By perverting sexuality, speech, or justice, we are not walking in the likeness of God or His Messiah Yeshua in our lives. It is only by using God’s gifts in the way He intended them to be used, we find true freedom, true peace, and true rest, and it is only then are we able to enjoy a healthy relationship with God. (Tehillim / Psalm 24:3–4, Matthew 5:8, Galatians 5:1)  The Apostolic Writings tells us that faith in God’s Messiah will cause us to enter into a special relationship, a covenant relationship.  And having entered into a covenant relationship with his Messiah, He will send His Spirit (the Holy Spirit) into our hearts and our lives, so that He will dwell in our midst, and give us the power to overcome sin.  The Lord God Almighty will give us the desire to walk in His commands, to turn from the perversion of His ways, and to establish his kingdom on earth beginning in our hearts for His glory.  This empowering is the significance of what it means that God loved us even yet while we were sinners, and in doing so He sent His only begotten son so that we might have everlasting life.  This everlasting life is coupled to walking in His ways, which brings joy, peace, and rest from the torment of sin in our lives.

The Bulls of our lips or The Temple Sacrifice?

Bits of Torah Truths, Parashat Vayetze, A Vision of Angels