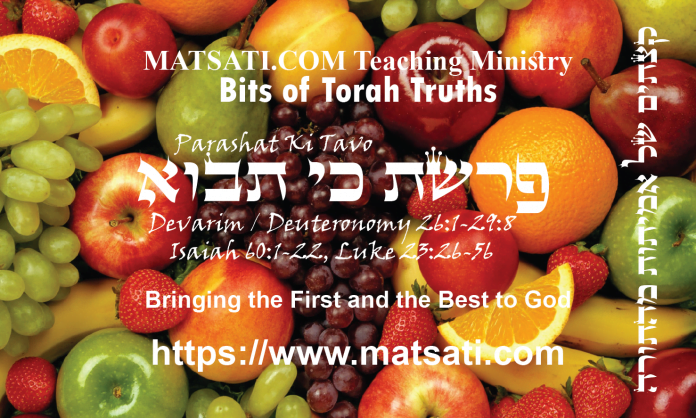 Since we don’t exactly live in an agricultural society, it’s easy to skip over this Torah commandment on first fruits.  This commandment of first fruits however also shows up in the New Testament. What does this mean for God’s Children (followers of Yeshua the Messiah) 4000 years after this command was given? Let’s see what we can learn in this week’s Torah portion?  In Parashat Ki Tavo, we read about the command to bring the first fruits of the land to the Lord and to bring these things in the place that He establishes His Name according to Devarim / Deuteronomy 26:1-11.

Rashi on Deuteronomy 26:2 Part 4
מראשית OF ITS FIRST FRUITS — but not all the first fruits (not even of the seven species mentioned above) but when a man goes into his field and sees for the first time that year a fig that has ripened he binds a piece of straw round it as an indication and says “Lo, this is בכורים” (and it suffices) (Sifrei Devarim 297:7; Mishnah Bikkurim 3:1).

Chizkuni, Deuteronomy 26:2 Part 1
ולקחת מראשית פרי האדמה, “you shall take of the first of all the fruit of the ground;” the reason why the Torah repeats this commandment which had appeared already in Exodus 23,19, is to list the commandments in a certain order.

Chizkuni, Deuteronomy 26:2 Part 2
מראשית, from the first,” Rashi emphasizes the importance of the letter מ i.e. “from,” as opposed to “all.”It is not even necessary to bring the entire fruit only part of it. [My version of Rashi, does not have this, but states that the farmer may designate the respective fruit before it has fully ripened. Ed.] An alternate interpretation: the word מראשית does not describe a time but describes quality, i.e. the best of these first fruit is to be brought to the Temple. The word ראשית appears in this sense of quality also in Jeremiah 2,3 ראשית תבואתו, “the best of His harvest;” [G-d comparing other nations to Israel whom He had chosen. Ed] The prophet Amos in Amos 6,6 also uses the word ראשית in that sense when he said: וראשית שמנים ימשחו, “and they anoint themselves with the choicest oils. Still another interpretation: the word מראשית means from the first in their respective category that have ripened, the very fact that they ripened earlier making those fruit superior.

Chizkuni, Deuteronomy 26:2 Part 5
והלכת אל המקום, “and you will go to the place, etc.;” the owner of the first ripened fruit is to do all this himself, not through someone whom he designated in his place. This refers both to collecting the fruit from the tree or cutting it from the ground. When a King employs a servant to tend to his fields, he also expects that tenant to bring him his share personally, not to delegate someone else with performing that duty.

Sforno on Deuteronomy 26:2 Part 1
מראשית כל פרי האדמה אשר תביא מארצך, the choicest of each category. [the word ראשית is not understood as “first.” Ed] We find the term ראשית used in this sense in Amos 6,6 וראשית שמנים ימשחו, “they anoint themselves with the choicest oils.” In verse 1 of the same chapter we read נקובי ראשית הגויים, “the ones known as the choicest of the nations. ” These “choicest” fruit are the seven types of produce for which the Land of Israel is famous, and this is why we have been commanded already in Exodus 23,19 to offer samples of these in the Temple. The gift known as ביכורים is not literally the fist ripe produce of each of these seven species, but the ones that grow on the best soil the farmer has so that it is truly also his choicest. The seven categorize of produce have been enumerated in Deut. 8,8-9.

Rashi states that not all of the fruit we are to bring to the Lord. He gives the example that when we go into the field, the first ripened fruit he intentionally sets apart (binding a string) with the intention of taking the very best to the Lord. Chizkuni states that this command has been repeated in Deuteronomy for the purpose of listing the commands in a certain order. This suggests there is a certain importance to the commandments, some being greater and others being lesser. He goes on to say that a farmer may designate which fruit to bring before it ripens. This is a form of intention or determining of the heart to bring to the Lord the choicest portions. He parallels this to the nations, the Lord chose Abraham as His people, where Israel is the choicest of all peoples to bear His testimonies. This is paralleled to those who anoint themselves with the choicest oils suggesting how important it is being called as a member of God’s family. Chizkuni also states that one is to bring these to God personally. A person is not to designate someone else to bring their fruit for them. This illustrates the importance of each of us bringing to God the first, choicest, and best fruit from our lives. This is related to how we live and serve the Lord. Serving the Lord is not the same as delegating the responsibility to someone else. We as God’s children cannot delegate away our responsibilities to others. Sforno states the same thing as Chizkuni agreeing with him on the high importance of bringing the best of the best to the Lord.

Let’s summarize the commands on the First Fruit Offering:

The Tanach describe the significance of the First Fruit Offering in the overwhelming blessing of God in the following way:

The greatest clue to the significance of the First Ftuits is found in the liturgy that was written to accompany the offering of the first fruits in Devarim / Deuteronomy 26:1-11. Every Israelite was commanded to take the first and best of their crops or produce, put them in a basket, and give them to the priest when they went to worship. And as they made their offering, certain statements were to be made. The first statement was to publicly declare that they had come into the land by the power and guidance of HaShem (The God of Israel). In other words, this offering was an expression of gratitude and an acknowledgement of God’s faithfulness in fulfilling his promises to us as His people.   With this in mind, we should begin each day with this statement thanking the Lord for His deliverance and His giving us the faith to believe in His Messiah.  The second statement according to Devarim / Deuteronomy 26 was a confession of faith that started with the words “A wandering Aramean was my ancestor…”  This statement outlines the story of being lost without God’s help, of being oppressed, of having deliverance, and then of God fulfilled His promise to us that is both historical and personal. The confession declares that despite our hard work of living our lives for the Lord (i.e. the crops, harvesting the oil, or shepherding the flocks, etc.) we are totally dependent upon God’s help in our lives. As a result of these things, we learn three basic principles about who we are as God’s people, (i) Giving isn’t optional, (ii) Giving happens first, and (iii) Giving anchors our faith. God’s intention is that each Man live his/her life under the sovereign rule of God giving Him all dominion over our lives.  In doing this, we will live with comfort and overwhelming blessing in our souls. However, realizing this divine calling and blessing depends on our prompt, total and consistent obedience to God’s instructions according to the Torah!

Bits of Torah Truths, Parashat Re’eh, If you abide in Me,...