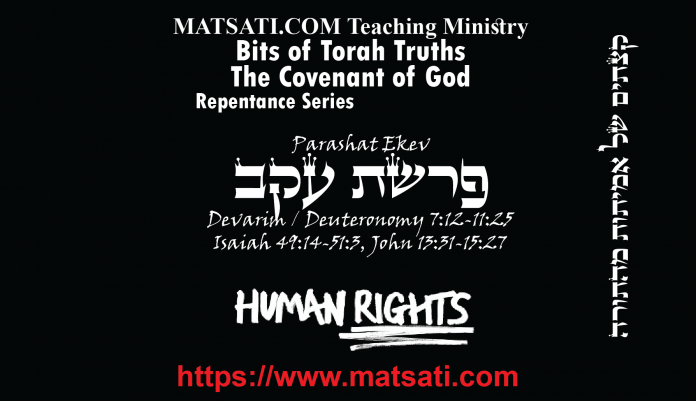 This week’s Torah portion from Parashat Ekev we read the following:


Notice the promises of God is related to being faithful to the covenant we have made with Him.  The Lord says that He will bless our families (children), our fields, our cattle, and He will do more so than all the other nations.  In addition to this, the Lord will keep us from sickness, and put upon our enemies a dreadful fear of God’s people and will inflict diseases of Egypt upon our enemies. It is difficult to speak definitively about human rights because it is such an esoteric topic, subject to personal opinion, historical precedent, and situational ethics in today’s modern society. “Human rights” is defined as those things that people naturally deserve by nature of their identity as human beings both from a moral and an ethical perspective. When understood from a Biblical standpoint, human rights are what we should have by nature of our having been created after the image of God.

I recently read an article titled “China’s two-child policy is having unintended consequences. Reluctant to pay for multiple maternity leaves, companies are choosing not to hire young women.” This article describes the human rights violations that are occurring in China which run contrary to God’s Word and His blessing according to this week’s Torah portion. The Chinese government mandated a one child policy which has had horrific consequences. I find it surprising how Christians can give great praises to China and its economy while ignoring the human rights violations taking place on a massive scale. Take for example the description given in the news article:

“THE one-child-per-couple policy was horrific for women in China. Many were subjected to forced sterilizations or abortions. Newborn girls were killed, removed by family-planning officials or abandoned by parents desperate that their one permitted baby be a boy. Women from neighboring countries suffered, too, as victims of human trafficking; a skewed sex-ratio made it more difficult for young men to find Chinese wives. So the government’s announcement in late 2015 was that it was relaxing the policy, after 35 years” (This article appeared in the China section of the print edition under the headline “The law of unintended consequences”)

The human rights violations occurring due to Chinese policy is appalling!  From a biblical standpoint, we don’t read the Scriptures specifically defining “individual rights.”  The Hebraic way the Torah defines this as “what God intended for us to have.” This includes elements of a particular lifestyle which is beneficial to us as His people and providing for us an understanding of what it means to be His people, to draw near to Him, to bear His testimonies, and to have justice in our lives.  In the sense of “Human Rights” as a God given lifestyle, we learn in the Torah that the Lord God Almighty set up a society in specific way to demonstrate to the world that we are His people.  The idea of human rights varies around the world because of “interpretation” and historical preferences, prejudices, and presuppositions which influence our judgment. The Lord however designed society in the following way:

These are human rights at an individual level, a lifestyle God had ordained, each man should have the opportunity to be married, to have a family, to be able to work, and to have an identity based in one’s ethnic and local community. A sin filled world however warps and distorts what these things mean, such as definitions of marriage and family, being given a free handout (socialism) as opposed to working for our income, and eliminating our ethnic identities.

The Torah further defines Human rights as defined by God’s justice and we are able to see this directly in His Word.  Rights as defined by justice, for the most part, are comprised of “ways in which people should not be victimized.” Consider the following references from the Scriptures:

These basic biblical human rights of justice are threatened every day all around the world no matter where we live!  It is sin to murder, steal, insult someone, kidnap, commit adultery, lie, disrespect another person, cheat, ignore the needy, rape, restrict one from having the right to worship, attack someone, hold a grudge, and mistreat foreigners. Justice is an absolute, and God intends that everyone receive it (Isaiah 30:18).

Human rights is also defined in the Torah as God’s Mercy!  The Torah does not describe human rights in terms of what we should demand, but in terms of what we are responsible for.  This is demonstrated in God’s commands on justice and mercy.  Both the Torah and Yeshua the Messiah tell us that in mercy we are to go beyond justice, which defines what it means to show mercy towards others.  We are to emulate both our Father in heaven and Yeshua the Messiah when it comes to being merciful.

In the Scriptures we learn how it is by the nature of who we are as God’s people that we have rights and responsibilities as part of the covenant of God. The Torah focuses our responsibilities connecting these things to the covenant of God.  We are responsible to enforce justice and to extend mercy (Michah 6:8).  This is what Moshe was talking about when he says the people are to be faithful to the covenant of God in the opening statements of Parashat Ekev.  If we are faithful, the Lord says that He will bless our families (children), our fields, our cattle, and He will do more so than all the other nations.  The Lord will keep us from sickness, and put upon our enemies a dreadful fear of God’s people and will inflict upon them all of the diseases of Egypt.

A Testimony of Faith in the Life of Isaac, פרשת תולדות, Parashat...

Fragments of energy, not waves or particles, may be the fundamental...