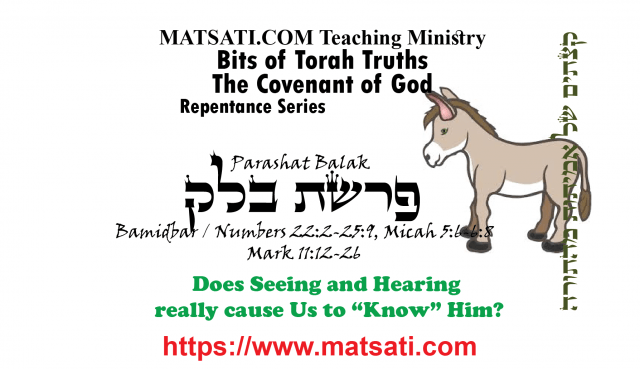 This weeks reading is from Parashat Balak (Bamidbar / Numbers 16:1-18:32), Balak king of Moab saw what the children of Israel had done to the Amorites and both he and the people of Moab were afraid being very anxious about Israel’s presence.  As a result, Balak asks for help from a man named Bilam. Now Bilam was well known according to Balak saying: כִּי יָדַעְתִּי אֵת אֲשֶׁר-תְּבָרֵךְ מְבֹרָךְ וַאֲשֶׁר תָּאֹר יוּאָר “For I know that he whom you bless is blessed, and he whom you curse is cursed.” (22:6). Bilam through prayer was in contact with the Lord as we see in the repeated references that God said do not go to Balak.  Bilam eventually goes with the men and God’s anger burned (וַיִּחַר-אַף) against Bilam and the Angel of the Lord stood in the way of Bilam’s donkey to slay him.  Bilam was very persistent; three times he turned to continue on his way being unaware that his life is in eminent danger.  How often do you think we walk in eminent danger if we are not walking and living according to God’s Word?  Think about this for a moment.  Last week, Moshe and Aaron failed to remain in God’s Word and failed to sanctify the Name of God (see Bamidbar / Numbers 20).  In this week’s reading, Bilam not only did not remain in God’s Word he also did not believe God’s Word.  If it were no for the mercy of God, Bilam would have died.

The relationship between the Lord and His people through prayer is a very important aspect of this week’s reading on the life of Bilam.  In this week we find Bilam seeking the Lord God to curse Israel.  Throughout the Scriptures, we are told to seek the Lord our God.  David said in Tehillim / Psalm 14:2 that the Lord looks down from heaven searching for those who seek Him.  We are also told to “make your requests known to God” (Philippians 4:6).  Therefore, seeking the Lord in prayer, in the Scriptures and in His Son Yeshua, we are living and acting in obedience to the Lord.  But the question remains: “Why would the Lord choose to do things in this way, to have us ask him and even repeatedly plead with him for his help?”  The reason is based upon the following four points that may be derived directly from the Torah.  (i) Dependence upon the Lord: “By prayer we continually humble ourselves before the Lord and depend upon Him for help.”  This keeps us from saying, “By my power, and the might of mine hand, have gotten this wealth” (Devarim / Deuteronomy 8:17, יז   וְאָמַרְתָּ בִּלְבָבֶךָ כֹּחִי וְעֹצֶם יָדִי עָשָֹה לִי אֶת-הַחַיִל הַזֶּה:).  (ii) Communion with the Lord: “The Lord desires to have communion with us.”  The reality is sometimes our hearts are reluctant to dwell in the presence of God, it is only by the renewing of the heart and mind in God’s Word and by the power of the Holy Spirit we are able to draw near into a close relationship with the Lord.  The Scriptures say in Devarim / Deuternomy 30:10-12 ט  וְהוֹתִירְךָ יְהֹוָה אֱלֹהֶיךָ בְּכֹל | מַעֲשֵֹה יָדֶךָ בִּפְרִי בִטְנְךָ וּבִפְרִי בְהֶמְתְּךָ וּבִפְרִי אַדְמָתְךָ לְטֹבָה כִּי | יָשׁוּב יְהֹוָה לָשֹוּשֹ עָלֶיךָ לְטוֹב כַּאֲשֶׁר-שָֹשֹ עַל-אֲבֹתֶיךָ: י  כִּי תִשְׁמַע בְּקוֹל יְהוָֹה אֱלֹהֶיךָ לִשְׁמֹר מִצְוֹתָיו וְחֻקֹּתָיו הַכְּתוּבָה בְּסֵפֶר הַתּוֹרָה הַזֶּה כִּי תָשׁוּב אֶל-יְהוָֹה אֱלֹהֶיךָ בְּכָל-לְבָבְךָ וּבְכָל-נַפְשֶׁךָ:  [ששי] יא  כִּי הַמִּצְוָה הַזֹּאת אֲשֶׁר אָנֹכִי מְצַוְּךָ הַיּוֹם לֹא-נִפְלֵאת הִוא מִמְּךָ וְלֹא-רְחֹקָה הִוא: 30:9 ‘Then the Lord your God will prosper you abundantly in all the work of your hand, in the offspring of your body and in the offspring of your cattle and in the produce of your ground, for the Lord will again rejoice over you for good, just as He rejoiced over your fathers;  30:10 if you obey the Lord your God to keep His commandments and His statutes which are written in this book of the law, if you turn to the Lord your God with all your heart and soul.  30:11 ‘For this commandment which I command you today is not too difficult for you, nor is it out of reach. (NASB)  (iii) The Lord Prepares us: “The Lord prepares our heart through prayer.”  He produces preparation by delaying to grant our request at the moment of our asking.  We are held in the truth of His presence until we are brought into spiritual understanding of the will of God for our lives.  Whether there is sin in our lives that is resulting in calamities or simply for the increasing of patience and love for others.  (iv) Cooperation with God: “We are called to be fellow laborers together with God.”  Scripture says that our Savior grieves with us and ever lives to make intercession.  To His redeemed people He says, Matthew 26:38 Then He said to them, ‘My soul is deeply grieved, to the point of death; remain here and keep watch with Me.’ (NASB).  According to the Scriptures and based on our own lives, there is a great work to be done in the hearts of Men.  Battles in spiritual wickedness, the casting down of idols, the casting out of demons, the works of the flesh, the works of the evil one, etc.  It is by prayer above all other means that we seek the Lord’s help to overcome and find victory.  Prayer is not for manipulating God into getting our own way, but is a way to draw near to the Lord and to be pleasing to Him by humbling ourselves and seeking Him.  Do you think Bilam missed the point in the time he spent in prayer with Most High God?  Do we miss the point sometimes when we pray?  Bilam returned again and again hoping he could cause God to change His mind.  Do you seek the Lord according to Yeshua’s example or according to Bilam’s example?  Yeshua said seek and you will find, ask and it will be given to you (Matthew 7:7).  This only comes with a pure heart (Tehillim /Psalms 24:4).  BTT_Parashat Balak-2013

Parashat Balak, Are you persistently walking in your own way?

Failing to Sanctify the Lord in Every Way, ישעיהו ח:יא-כג /...