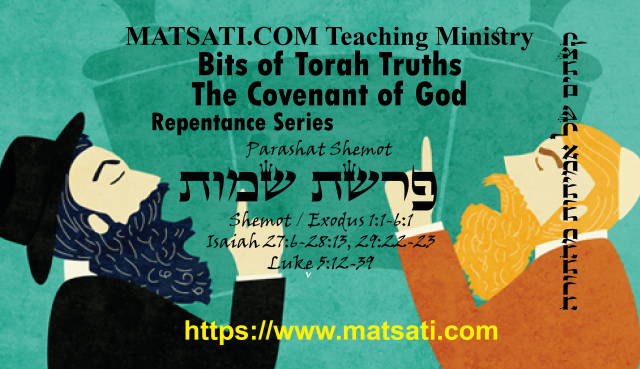 In this week’s reading, the opening verses to the book of Exodus say the following, וְאֵ֗לֶּה שְׁמוֹת֙ בְּנֵ֣י יִשְׂרָאֵ֔ל הַבָּאִ֖ים מִצְרָ֑יְמָה אֵ֣ת יַעֲקֹ֔ב אִ֥ישׁ וּבֵית֖וֹ בָּֽאוּ׃ These are the names of the sons of Israel who came to Egypt with Jacob, each coming with his household: 2 רְאוּבֵ֣ן שִׁמְע֔וֹן לֵוִ֖י וִיהוּדָֽה׃ Reuben, Simeon, Levi, and Judah; 3 יִשָּׂשכָ֥ר זְבוּלֻ֖ן וּבְנְיָמִֽן׃ Issachar, Zebulun, and Benjamin; 4 דָּ֥ן וְנַפְתָּלִ֖י גָּ֥ד וְאָשֵֽׁר׃ Dan and Naphtali, Gad and Asher. 5 וַֽיְהִ֗י כָּל־נֶ֛פֶשׁ יֹצְאֵ֥י יֶֽרֶךְ־יַעֲקֹ֖ב שִׁבְעִ֣ים נָ֑פֶשׁ וְיוֹסֵ֖ף הָיָ֥ה בְמִצְרָֽיִם׃ The total number of persons that were of Jacob’s issue came to seventy, Joseph being already in Egypt. 6 וַיָּ֤מָת יוֹסֵף֙ וְכָל־אֶחָ֔יו וְכֹ֖ל הַדּ֥וֹר הַהֽוּא׃ Joseph died, and all his brothers, and all that generation. 7 וּבְנֵ֣י יִשְׂרָאֵ֗ל פָּר֧וּ וַֽיִּשְׁרְצ֛וּ וַיִּרְבּ֥וּ וַיַּֽעַצְמ֖וּ בִּמְאֹ֣ד מְאֹ֑ד וַתִּמָּלֵ֥א הָאָ֖רֶץ אֹתָֽם׃ (פ) But the Israelites were fertile and prolific; they multiplied and increased very greatly, so that the land was filled with them. 8 וַיָּ֥קָם מֶֽלֶךְ־חָדָ֖שׁ עַל־מִצְרָ֑יִם אֲשֶׁ֥ר לֹֽא־יָדַ֖ע אֶת־יוֹסֵֽף׃ A new king arose over Egypt who did not know Joseph. Reading through these Scriptures, we are told the total number of persons entering into Egypt were 70 persons. Taking this into consideration, we read in the book of Acts 7:14 which states that “Joseph sent word and invited Jacob his father and all his relatives to come to him, seventy-five persons in all.” This seems to contradict what we read in Bereshit / Genesis 46:27, Shemot / Exodus 1:5, and Devarim / Deuteronomy 10:22, which all say it was 70 persons. I have run into anti-missionaries who say this is why the NT is not to be trusted and Yeshua is not the Messiah. The question is, what accounts for this difference between the Apostolic Writings and the Masoretic text? The difference is found in the Septuagint, a Jewish translation from the third century B.C., made for diaspora Jews in Egypt whose language was Greek and who no longer understood Hebrew. Later, the early Christian Church adopted the Septuagint as divinely inspired and this version became the basis of the Latin translation known as the Vulgate. The conclusion is Stephen was quoting from the Septuagint when speaking to the Sanhedrin in Acts chapter 7. Was the Septuagint however read in the synagogues of the first century? Based on some NT references (not shown), the synagogue service included the Hebrew Scriptures. However, the Jews did use the Septuagint for studying the scriptures outside the Synagogue services. For the Jewish people whose first language was Greek (such as in Alexandria and people like Stephen in the New Testament), the Greek text was most likely their principle Bible.

Now in Bereshit / Genesis 46:26 we learn that 66 biological descendants of Jacob had traveled to Egypt. That is, Joseph and his two sons were not counted from the genealogy (along with Er and Onan, who had died previously in Canaan), the number is 66 people according to the Masoretic Text. This number did not include the wives of the sons of Jacob (Bereshit / Genesis 46:26). Bereshit / Genesis 46:27 however states 70 people traveled to Egypt. Based upon this number, the additional four people appear to be: Jacob, Leah, Zilpah, and Bilhah. This is why Shemot / Exodus 1:5 and Devarim / Deuteronomy 10:22 indicate 70 persons. The Septuagint on the other hand states 75 persons that is noted in Acts 7:14. The math found in Masoretic text takes 66 + 4 = 70, whereas the Septuagint takes 66 + 9 = 75. The Septuagint states there were 66 biological descendants of Jacob plus 9 additional persons. In Acts 7:14, Joseph desired that Jacob and all his relatives would live and remain with him in Egypt. So if we have 66 biological relatives along with Jacob and his wives making up the 70, who were the other five people? The additional 5 persons appear to be Manasssah (son of Joseph), Ephraim (son of Joseph), Jochebed (daughter of Levi born in Egypt – Bamidbar / Numbers 26:59), Er (died in Canaan), and Onan (died in Canaan). If we consider the Torah narrative, note that Er and Onan died while Joseph was away sold in slavery and prison. He was informed of Judah’s sons but not that they had died. As regards Jochebed, according to the Talmud, Jochebed (Levi’s daughter) had been conceived, but yet unborn when she arrived in Egypt in the womb of her pregnant mother. Note this is a similar rabbinic interpretation as we find in Hebrews 7:10. The Talmud Bavli Sotah 12A states this very same thing:

Talmud Bavli Sotah 12A:14
את בת לוי אפשר בת מאה ושלשים שנה הויא וקרי לה בת דא”ר חמא בר’ חנינא זו יוכבד שהורתה בדרך ולידתה בין החומות שנאמר (במדבר כו, נט) אשר ילדה אותה ללוי במצרי The verse is referring to Jochebed as “a daughter of Levi” (Exodus 2:1). The Gemara asks: Is it possible that this is Jochebed? Jochebed was then 130 years old and the verse still calls her a daughter? Jochebed’s age is established based on a tradition concerning the number of the descendants of Jacob who came to Egypt, as follows: While the verse states that Leah had thirty-three descendants (Genesis 46:15), only thirty-two were enumerated. This was explained as Rabbi Ḥama, son of Rabbi Ḥanina, says: The “daughter of Levi” is Jochebed, whose conception was on the road, as the family of Jacob descended to Egypt, and she was born between the walls, i.e., in Egypt, as it is stated: “And the name of Amram’s wife was Jochebed, the daughter of Levi, who was born to Levi in Egypt” (Numbers 26:59).

The Talmud states Jochebed was a living person while yet unborn. Adding all of these persons up, including Joseph’s sons (Manassah and Ephraim) we get to the number listed in the Septuagint of 75 persons descending into Egypt. In summary, the Masoretic Text and the Septuagint appear to be aspects of the same issue, but viewed at from slightly different angles. We can safely say that Stephen’s number of 75 is accurate depending on how he was counting, according to the Masoretic text of the Septuagint. Both the numbers 70 and 75 fall within the range of rabbinic tradition, and the count of the number of persons descending into Egypt of 75 is consistent with the Torah. With certainty Stephen cited this correctly, and shows that God took a very small number of people and turned them into a great nation for His own glory. While studying the Scriptures it is very important that we are able to look at the Scriptures from both perspectives and not be held fast to our presuppositions or to a particular doctrine. This also provides reasons why it is important we examine the Rabbinic materials along side of the written Scriptures.

Tehillim / Psalms 51, Part 1, The Sacrifice of Righteousness and...