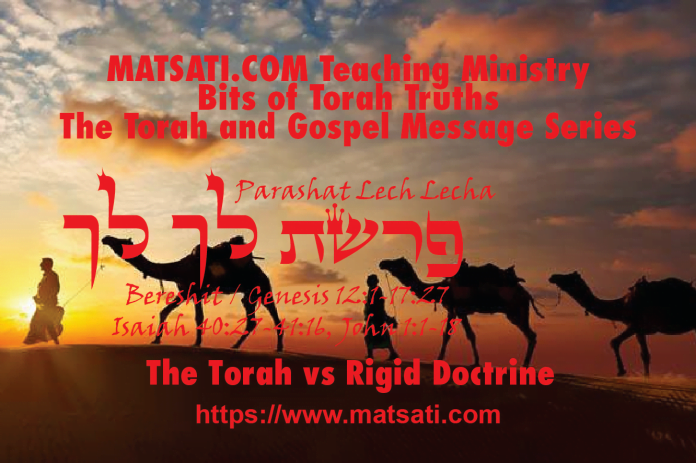 The reign of God in our lives is of utmost importance and this is why we are given the narrative that we have been given in the Torah in relation to the Lord God Almighty separating a people unto Himself, delivering His people from slavery, from the bondage to sin, giving His people His instructions for living, and the promise of His dwelling in our midst. The Kingdom of Heaven signifies God’s redemptive power in our lives. His dwelling in our midst, His Spirit living inside of us, our being empowered to be free from sin, these things all encompasses the authority of the Torah in our lives. In Parashat Lech Lecha we find the Lord God calling out to Abram to go to a new land, and the Lord promised to make him into a great nation. God foresaw a people who would come out of Abram who would seek to do the will of God by receiving the Kingdom of Heaven with joy at the foot of the mountain of Sinai. That it would be the mercy of God that drew them to His presence and place of worship. By faith they would enter into a covenant relationship and be one in faith and faithfulness to God’s commands. What is illustrated in God’s call to Abram was that his obedience would bring a great blessing. In fact, those who would bless Him would be blessed, and those who would curse him would be cursed, and all of the families of the earth would be blessed (Bereshit / Genesis 12:2-3). This is how Paul understood these things according to Galatians of which he viewed as a messianic expectation saying, “Now to Abraham and his Seed were the promises made” (Galatians 3:16) how the people from all nations will be blessed, and would be able to receive salvation (Acts 4:10-12, Galatians 3:16) by having faith in the Messiah of God. The prophet Isaiah wrote in 19:24: ביום ההוא אשים את ישראל ברכה בקרב הארץ, “on that day I will set up Israel as a blessing in the midst of the earth.” God’s plan was for Israel to become a blessing, and the messianic expectation that all the nations would be blessed for the purpose of manifesting the glory of God. The prophet Isaiah said that we will hear a voice behind us telling us the right way to walk in (Isaiah 30:21) essentially meaning, “Walk in front of Me and listen to My voice and I will do good to you.” This is how David and Shlomo walked according to the Torah which states, “If you will walk in my statutes” (Vayikra / Leviticus 26:3); “if you will truly listen to the voice of the Lord, your God” (Devarim / Deuteronomy 28:1); and with Yitzchak, it stated, “on account of Avraham, my servant” (Bereshit / Genesis 26:24)” The idea being put forward here is when we walk in God’s presence (walking before Him) walking by His commandments, we are walking by His light and doing so causes us to see the error of our ways. This is why Paul wrote in 1 Timothy 1:9 Knowing this, that the law is not made for a righteous man, but for the lawless and disobedient, for the ungodly and for sinners, for unholy and profane, for murderers of fathers and murderers of mothers, for manslayers. (KJV) Paul upheld the moral and ethical standard in the communities he established. His ethics were based upon his training as a Pharisee and his love for the Torah. This is how the Torah and the Gospel message are connected, each person experiences God’s power in their lives, as it is demonstrated in the divine sovereignty over our lives. (i.e. we have a God given desire that God’s Word would govern our lives.) As people seek to enter into the kingdom of heaven by faith in His Messiah, we seek His reign over our lives, to obey His will, and to see the move and power of God in our lives to overcome sin. All of these things are coupled to the concept of God’s sovereignty over our lives, and this results from our making the conscious decision to ask Him into our hearts to be Lord over our lives. Entry to His kingdom comes by way of the Messiah, to believe in Him and in what He did for us, and to walk in His ways just as He walked in the ways of God’s Torah and all those who went before him. These are the things we are being taught as we read the story and life of Abram, the man of faith.

What we learn from the story of Abraham was his willingness to listen and obey the calling of God. Abraham had faith, and by faith he became the father of many nations. (Romans 4:18 who, contrary to hope, in hope believed, so that he became the father of many nations, according to what was spoken, “So shall your descendants be.”) The Lord God told Abraham he would be the father of many nations before he had any children. Sarah was barren (Bereshit / Genesis 11:30) and Abraham took the Lord God at His word. It was also by faith that the Lord God counted it to him righteousness (Bereshit / Genesis 15:6 “And he believed in the Lord, and He accounted it to him for righteousness.”) This is the kind of faith we are to have as well, we need to believe God and His Words. This is what Paul meant when he said, God “made Him who knew no sin to be sin for us, that we might become the righteousness of God in Him” (2 Corinthians 5:21). It was by his faith that he received the promises of God. Abram did not fear the unknown (see Bereshit / Genesis 12:1-5) when he left his homeland to follow God’s command. The fact that we are here today believing in the Messiah Yeshua is evidence for the Lord God fulfilling His promise to Abraham who was a father of many nations. Abraham’s faith speaks to us in so many ways. His faith states that we can believe God simply on what He said in the Scriptures, we have no need for a miraculous sign, though salvation in and of itself is quite a miracle of God. We can trust in the Lord God no matter the circumstance and be assured that He is with us (Devarim / Deuteronomy 31:6) and He will never leave nor forsake us. All that He has promised He will give to us if we remain faithful to Him.

Abraham is one of the most significant figures in the Torah. The Apostle James calls him “a friend of God” (James 2:23) and all of the generations of the children of God are also called the “children of Abraham” (Galatians 3:7). The narrative in the Torah on the life of Abraham spans from Bereshit / Genesis 11 to chapter 25. We are told that he was 75 years old when he heard the Lord God calling him to the land of Canaan.

Bereshit / Genesis 12:1-3
“The LORD had said to Abram, ‘Leave your country, your people and your father’s household and go to the land I will show you. I will make you into a great nation and I will bless you; I will make your name great, and you will be a blessing. I will bless those who bless you, and whoever curses you I will curse; and all peoples on earth will be blessed through you’” (NASB).

The promises of God to Abraham was that he would be a father of many nations, that he would have his own land, that he would be blessed, and those that curse him would be cursed. The most significant thing about Abraham was about his faith in the Lord God Almighty, not only with moving his family, but in circumcision, and in offering his own son. (Bereshit / Genesis 22). Abraham acted faithfully on Mount Moriah obeying the Lord, and the Lord was gracious to him. The obvious lesson that we are to draw from Abraham’s life is that we too are to live a life of faith. Abraham believed God, he trusted in the Lord God that he was faithful and true. Abraham also demonstrates for us that faith without works is dead (James 2:21). The examples given to us in the Torah demonstrate to us that faith leads to the work of obedience (faithfulness), faith is alive, it is living, and it is a part of our lives. Faith causes us to enter into a covenant relationship with God, it is that which counts us as righteous in God’s eyes, (Bereshit / Genesis 15) and it is also faith that moves us to obey God’s commands, just as Abraham did. Abraham was justified by his faith, and his faith was proved by the way he lived his life. The important point to recognize is that hereditary relations is not enough to be called a descendent of Abraham. (See Matthew 3:9, Luke 3:8, John 8:39). The application of faith is what it means to be a descendent of Abraham. To simply be raised in a godly home is not enough and this is why Paul wrote that not all who descended from Abraham are saved (see Romans 9). The Lord God draws men to Himself, and it is by faith that causes one to enter into a relationship with God, it was through faith that Abraham lived his life. Abraham was an extraordinary individual because his life illustrated these truths and in a similar manner, our lives should reflect our faith, just like Abraham did, and this will remain as an enduring testimony to others for the truth of the Gospel Message.