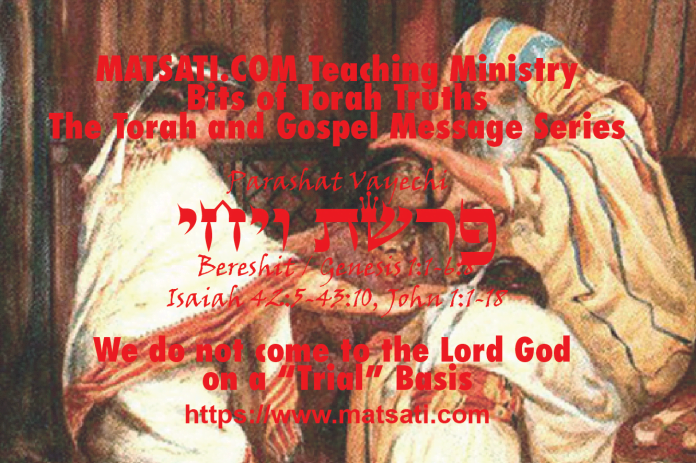 In the last Torah Portion of the Book of Bereshit / Genesis, Jacob becomes sick and is about to die. Joseph brings his two sons to see their grandfather one last time (Bereshit / Genesis 48:1) and Jacob having difficulty seeing brings them near and then proceeds to bless them (Bereshit / Genesis 48:9). The narrative describes how Jacob placed his right hand on Ephraim and his left hand on Manasseh, crossing his arms (שִׂכֵּל אֶת־יָדָיו). (Bereshit / Genesis 48:14). The right hand is a position of power and honor. From a biblical perspective, the right-hand placement is described in the context of being next to God in heaven, as it is mentioned of Yeshua the Messiah in Mark 16:19, Luke 22:69, Matthew 22:44 and 26:64, Acts 2:34 and 7:55, 1 Peter 3:22 and elsewhere. The use of the right-hand reflect the use of the phrase in the Tanach (תנך), for example in Tehillim / Psalms 63:8 My soul clings to You; Your right hand upholds me. (NASB, ט דָּבְקָה נַפְשִׁי אַחֲרֶיךָ בִּי תָּמְכָה יְמִינֶךָ:) and 110:1 The Lord says to my Lord: ‘Sit at My right hand Until I make Your enemies a footstool for Your feet.’ (NASB, א לְדָוִד מִזְמוֹר נְאֻם יְהֹוָה | לַאדֹנִי שֵׁב לִימִינִי עַד-אָשִׁית אֹיְבֶיךָ הֲדֹם לְרַגְלֶיךָ:) The implications of this anthropomorphic phrasing have been discussed at length by theologians. Joseph attempts to correct his father (Bereshit / Genesis 48:18) but Jacob insists that he is acting deliberately stating that the younger (Ephraim) will be greater than the older (Manasseh). Jacob set Ephraim ahead of his brother (Bereshit / Genesis 48:19) and then proceeds to pronounce a blessing.

The Masoretic Text states, וַיָּשֶֹם אֶת־אֶפְרַיִם לִפְנֵי מְנַשֶּׁה, saying explicitly, “Thus placing Ephraim before Manasseh.” The repetition of putting Ephraim before Manasseh is emphasizing putting the second born ahead of the first born. Rashi states that Jacob changing the order of younger before older was for the purpose of Ephraim directing Israel in the wilderness when encamped around the Tabernacle. (Rashi on Bereshit / Genesis 48:20, Part 2) The Torah repeats the phrase that he had put Ephraim before Manasseh was simply to restate what had happened, according to Rashbam and Ibn Ezra. The Masoretic text juxtaposes putting Ephraim before Manasseh next to a comparison with Reuben and Simeon, making the decision to do so unquestionable according to Chizkuni. The significance of reordering the name is emphasized in Jacob’s statement, 48:5 ‘Now your two sons, who were born to you in the land of Egypt before I came to you in Egypt, are mine; Ephraim and Manasseh shall be mine, as Reuben and Simeon are. 48:6 ‘But your offspring that have been born after them shall be yours; they shall be called by the names of their brothers in their inheritance. (NASB, ה וְעַתָּה שְׁנֵי-בָנֶיךָ הַנּוֹלָדִים לְךָ בְּאֶרֶץ מִצְרַיִם עַד-בֹּאִי אֵלֶיךָ מִצְרַיְמָה לִי-הֵם אֶפְרַיִם וּמְנַשֶּׁה כִּרְאוּבֵן וְשִׁמְעוֹן יִהְיוּ-לִי: ו וּמוֹלַדְתְּךָ אֲשֶׁר-הוֹלַדְתָּ אַחֲרֵיהֶם לְךָ יִהְיוּ עַל שֵׁם אֲחֵיהֶם יִקָּרְאוּ בְּנַחֲלָתָם:) Jacob makes Joseph’s two sons as his own calling them by their names to become the twelve tribes of Israel.

Throughout the Tanach (תנך) the name Ephraim became the name of the ten tribes which comprised Israel’s northern kingdom. (Ezekiel 37:16, Hosea 5:3) The Northern Kingdom, also referred to as “Israel,” was taken into captivity by the Assyrians in 722 BC (see Jeremiah 7). The Southern Kingdom, also known as Judah, was conquered by the Babylonians nearly 140 years later (586 BC). The way the name Ephraim was used figuratively for the Ten Tribes in the Northern Kingdom is well attested (see Isaiah 7:2-8, Hosea 5:3-9, etc). In 2 Chronicles 15:8-11, the removal of Ephraim is described as a forsaking of the God of their fathers and His Torah. This led to Ephraim historically being distant from God, and the greatest lesson from the history of Ephraim that we may learn is that the Lord God of Israel loves us despite our failings. He is patient, merciful, and calls out to us to draw near and repent. We read about Ephraim being mentioned during Yeshua’s ministry, following raising Lazarus from the dead, Yeshua withdrew to a region near the wilderness to a town called Ephraim. (John 11:54 11:54 Jesus therefore no longer walked openly among the Jews, but went from there to the region near the wilderness, to a town called Ephraim, and there he stayed with the disciples. ESV) Note how Yeshua withdrew from a public ministry to one that was more distant, because he was called to lay his life down on behalf of others and not to be made a king with an earthly kingdom. His kingdom would be set up later, the order of these things was necessary because in order to make peace with God one must listen to and accept the message of Yeshua.

These scriptures from the last few Torah portions teach us that a person will either experience the grace of God or the divine wrath of God in the day of retribution. This is illustrated in the encounter of Joseph’s brothers with Joseph so many years later being put into a place of power, his brothers had no choice but to stand before him and ask for grain in order to live. The issues we see today, the lawlessness that is going on in our culture around the world and in the church, is centered upon the validity of the Torah and the teaching of practical theology (practical biblical living). I have read reports recently how the conservative church is now struggling with a decision on LGBT. If we are standing upon the Word of God as our foundation, there should be no controversy over what God’s will is concerning sin. Some of the confusion that is entering into the conservative church’s is how Christians are being told in the modern theological teachings that God wants you just come as you are, while completely neglecting the idea of repentance (Teshuvah). This concept of God wanting you just as you are without Teshuvah is not a biblical concept. The Scriptures tell us to come with a humble heart before God and repent meaning we are actively acknowledging our sins before God, confessing our sins, and seeking His help to turn from our sins. As a people of God, we are called to turn from sin and not embrace it (embracing sin is what the LGBT community wants). If we simply embrace our sins, do not repent, and ask God to forgiven us, what need would there be for what Yeshua had done upon the cross? Why do we need Yeshua? The biblical concept here is to hear the Word of God which produces faith, which leads to having the expectation of something changing in our lives. We are seeking the Lord God Almighty to help us change. We change, we do not stay the same, and we also do not come to the Lord God on a “trial” basis. The Word of God is effective in reforming the will, the heart, the mind, and remaining in the Word of God is of utmost importance. This is what Paul meant when he said, the Word of God is able “to make the man of God perfect, and thoroughly furnished” (2 Timothy 3:17) or as David wrote in his Psalm saying, “Wherewithal shall a young man cleanse his way? By taking heed thereto according to Thy Word” (Tehillim / Psalms 119:9). It is not possible to take heed to the Word of God while embracing sin. These things teach us how young men are heedless and headstrong and are lit up by lusts. An important point is if we allow ourselves to live sinful lives that are absent of repentance and turning from sin, as we get older, turning from sin will become more difficult. The Word of God is given to cleanse, cool down (tame) and subdue the will bringing the heart into submission and humility to God. This is the power of God’s Word and the great love that He has for His people! This is how the Torah and the Gospel Message go hand in hand!