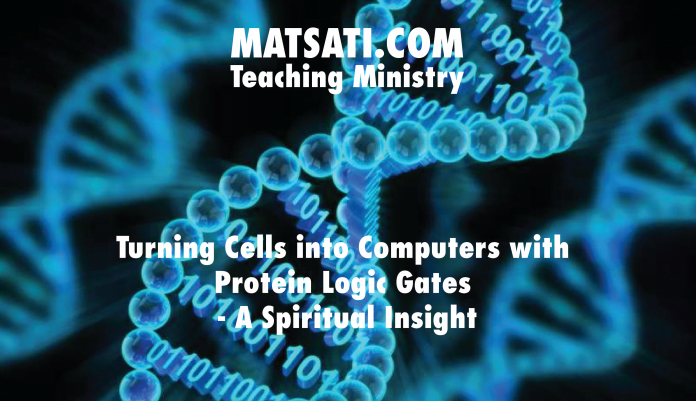 Logic gates are the basic building blocks of any digital system. Logic gates are an electronic circuit having one or more than one input and only one output. The relationship between the input and the output is based on a certain Boolean logical operator. A logic gate is an idealized or physical electronic device implementing a Boolean function, a logical operation performed on one or more binary inputs that produces a single binary output. Logic gates are primarily implemented using diodes or transistors acting as electronic switches, but can also be constructed using vacuum tubes, electromagnetic relays (relay logic), fluidic logic, pneumatic logic, optics, molecules, or even mechanical elements. These same basic tools that allow computers to function are now being designed at a molecular level. The advantages of such a technology has its application in medicine and synthetic biology. In a paper recently published in Science Magazine [1] scientists have created artificial proteins that function as molecular logic gates. The gates were built from small, laboratory designed proteins that have very similar structure providing the ability to cause one module to interact specifically with another module. The paper reports using monomers and covalently connected monomers as inputs and encoding specificity through designed hydrogen-bond networks which allowed the construction of two-input or three-input gates based on competitive binding. The modular control was used to regulate the association of elements of transcription machinery and split enzymes in vitro and in yeast cells. (i.e. In molecular biology and genetics, transcriptional regulation is the means by which a cell regulates the conversion of DNA to RNA (transcription), thereby orchestrating gene activity.) These molecular logic gates are being used to program the behavior of more complex systems. The research team showed how these laboratory designed proteins are able to regulate gene-expression inside human T-cells. The development of this technology may improve the safety and durability of future cell-based therapies. There are quite a few publications [2–3] which provide details on other engineers making logic gates or circuits out of DNA and RNA. The basic tenet of the logic gate again is to sense input signals and provide a boolean operation on the signals giving the mathematical property as the output.

The idea being put forward here is the way we understand materials, semiconductors, silicon, germanium, etc, used to manufacture transistors and diodes, this same reasoning is being used to develop these synthetic biological gates that are able to function like a computer. One such function is similar to being able to sense when one presses the enter key or letters or numbers, the scientists are attempting to bring this level of technology into the biological engineered system. The paper [1] describes the design of two-input AND, OR, NAND, NOR, XNOR, and NOT gates built from de novo–designed proteins. If we consider this current technological progress described here in the paper, during the early years in computer development, back in the 1980s Apple introduced the Apple II+. The circuit diagram was drawn on the back of the manual showing how they used standard components that most electronic stores stocked at that time using simple logic gates. From a starting point, very simplistic designed systems, this is obviously a key step towards building more complex biological circuits from scratch. Next is to find a way to begin manufacturing these gates on a larger scale, either by growing them in vitro or manufacturing them with some kind of printing technique. It will be interesting as we watch as this technology continue to be developed and expanded upon in the future.

The Spiritual Insights that we receive from this type of research is related to a prophetic message the Lord God gave us according to Jeremiah 31 which states the following:

The Lord God says through the prophet Jeremiah saying, “I will put my law (תּוֹרָה) within them, and I will write it on their hearts.” This is a form of programming God’s holy Word into our hearts. The reason we need this is because we need God’s help to escape the “programming” of our culture (olah hazeh, this world). This is something that Paul was teaching when he said we are to be “conformed” (σύμμορφος, this is analogous to being morphed (morphe) into the likeness of the Messiah) to the Messiah (Romans 8:29), and by doing this we are not “conformed” (συσχηματίζω) to the pattern of this fallen world (Romans 12:2). The Greek text describes this as to resemble or to be made similar in form (μορφή) in Romans 8:29. According to Romans 12:2, the Greek text states we are not to accept the world’s scheme (σχῆμα) of understanding things, to passively go along with the world’s lies, extravagant fantasies, lustful thinking, fearmongering, propaganda, etc. These things draw in the concept of holiness and the need for the Lord God Almighty to help us to live righteous and holy lives!

In the book of Leviticus we read the following according to Vayikra / Leviticus 23:1 The Lord spoke again to Moses, saying, 23:2 ‘Speak to the sons of Israel and say to them, ‘The Lord’s appointed times which you shall proclaim as holy convocations My appointed times are these (NASB, א וַיְדַבֵּר יְהוָֹה אֶל-מֹשֶׁה לֵּאמֹר: ב דַּבֵּר אֶל-בְּנֵי יִשְֹרָאֵל וְאָמַרְתָּ אֲלֵהֶם מוֹעֲדֵי יְהֹוָה אֲשֶׁר-תִּקְרְאוּ אֹתָם מִקְרָאֵי קֹדֶשׁ אֵלֶּה הֵם מוֹעֲדָי:). The Masoretic Text states mikra’ei kodesh (מִקְרָאֵי קדֶשׁ) calling this the “times in which holiness is proclaimed.” One aspect of holiness is the sense of “separateness” from the prevailing culture. The Rabbis say according to Vayikra Rabbah Parashat 24 Part 4, ויקרא רבה כ״ד:ד׳ The Holy One said to Moshe: go and tell Israel ‘my son, just as I am separate, so too you be separate. Just as I am holy, so too you be holy.’ This is what is written “You shall be holy…” The interpretation is that God has separated us from the world, this is found in the Torah’s declaration that these days are to be holy (mikra’ei kodesh), we are set apart for special activities in celebrating the Lord God of Israel as our Creator (the Shabbat), and Yeshua as our Redeemer (the Passover), our Resurrection (Bikkurim, first fruits), as the one who gives us His programming (per the scientific study and the festival of Shavuot, the giving of the Holy Spirit and the fulfillment of Jeremiah 31 prophecy), and as our King in the festival of Teruah / Rosh Hashanah, and Yeshua as our Cohen HaGadol (High Priest in the festival of Yom Kippur, Day of Atonement). In addition to this, we celebrate the God of Israel as our shelter in the festival of Sukkot (Tabernacles), and the list could go on. Paul again taught Torah in this sense pointing out how we must be separate repeating what the Lord told Moshe to tell the people saying, “just as I am holy, so you must be holy,” by his message to Rome saying that we are to be “conformed” (σύμμορφος) to the Messiah (Romans 8:29), and not “conformed” (συσχηματίζω) to the pattern of this fallen world (Romans 12:2). The prophetic message given by Jeremiah (31:31-34) is God’s declaration that He will help us to escape, giving us divine programing in a biological system (our lives) such that we would be transfigured, changed from the inside out, and renewed in our minds, such that we would be able to understand the reality of God in our lives, of what it means to have faith in the Messiah, and the power of God to help us overcome this world. This is a powerful truth the Scientific research is drawing out for us when we study Science along side of the Torah, the Prophets, and the Apostolic Writings!

The Gospel Message reveals the passion of God for each and every one of us. What the Scriptures reveal to us is how God has elevated each and every one of us to the role of the beloved, as one who is prepared for a wedding banquet, God loves our souls! The wickedness of this world, sin, threatens to draw us away from God’s love and to interfere with our relationship with the Lord. In regards to the Scientific research, the manipulation of biological systems to mimic computer logic circuits coupled to the prophetic message given us in Jeremiah 31:31-34, we are revealed the miracle of newness of life and the hope of glory in the Messiah (see Colossians 1:27). This centrality of the Messiah in our relationship with God and in life itself is illustrated in how the Talmud states, “All the world was created for the Messiah.” (Sanhedrin 98b) Notice something here, the New Testament states the exact same thing saying, “All things were created by Him (Yeshua), and for Him” and “in Him all things consist” (συνεστηκεν, have their being) (Collosians 1:16-17). This describes how all of creation is being maintained, held together, continuing to live/exist, by the word of the Messiah’s power (Hebrews 1:3). The creation itself begins and ends with the redemptive love of God that is revealed to us in the Messiah Yeshua our LORD. The Messiah is the Center of Creation, He is its beginning and end. This is revealed to us at the end of Revelation when Yeshua said אָנֹכִי אָלֶף וְתָו רִאשׁוֹן וְאַחֲרוֹן רֹאשׁ וָסוֹף “I am the Aleph and the Tav, the First and Last, the Beginning and the End.” (Revelation 22:13) The NT agrees with the Talmudic interpretation on the Messiah, the world being created for Him, and the Name of the Messiah is Yeshua, God’s Son, whereby we are saved. (see Acts 4:12) The focal point of faith is upon the Anointed One of God, seeing how our salvation is dependent upon the Messiah and upon the power of the God of Israel in heaven. The Scientific research [1] describes using biological systems to function in such a way as to provide boolean logical operators to form logic gates, and ultimately to perform in a similar way to what we see with our modern computers, laptops, and cell phones. Notice how these things describe “boolean logic” being suspended between two worlds, one of hardware and semiconductors, and the other of biological organic systems. In parallel, likewise, our lives ultimately are suspended between two worlds. This world, with its deception and illusions, and the spiritual world, which has purpose, meaning, and life! Even the current state of the research “Turning Cells into Computers with Protein Logic Gates” has a parallel to us in the sense that we exist in an “already, but not yet” state. We have been made, prepared, and established, in Yeshua the Messiah, but have not quite yet reached the goal in the expectation and yearning for heaven. This is also drawn out in the book of Revelation which speaks of heaven on earth, God dwelling in the midst of His people, and how there will be “…no need of the sun or of the moon to shine on it, for the glory of God has illumined it, and its lamp is the Lamb.” (Revelation 21:23) Note how boolean algebra is also related to truth operations (logic) and the parallel to our lives in how we are called to live out God’s truth! This is what marks the lifestyle of a follower of the Messiah! By consequence, we remember the Torah and its truth, we choose to live by its mandates to always “set the Lord before us” and “take every thought captive into obedience to the Messiah the Anointed One of God”, such that God can help us to walk in His ways of life, righteousness, holiness,  justice, and truth by the power of His love and grace!

Watch – Scientists use Stem Cells from Frogs to Build First...

Ancient Asteroid Impacts Created the Ingredients of Life on Earth and...