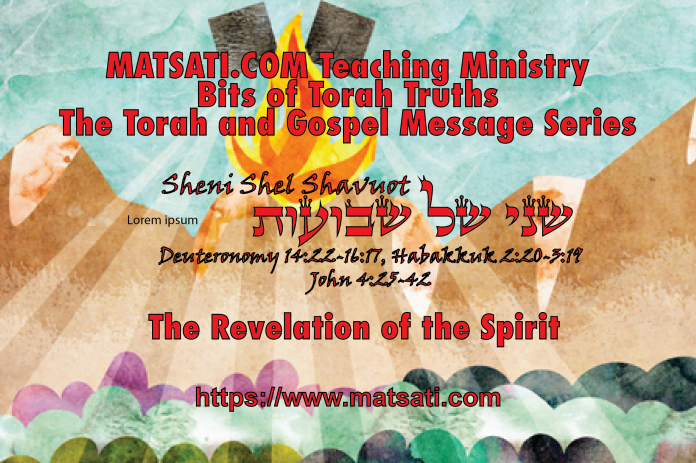 The Rabbis explain to us that in every generation, each person should consider himself as having personally received God’s Word at the Mountain of Sinai. In the synagogue, on the days of Shavuot (two days in the diaspora), the Torah scroll is removed from the Ark. On the first day, the reading is taken from Shemot / Exodus 19-20 which gives the narrative on the Ten Commandments. The intention is to stand during the reading to emphasize the importance of the event at Sinai, and to simulate the experience that occurred at Sinai when the Jewish people stood to receive the revelation of God. The festival of Shavuot (fest of weeks, Pentacost) marks the culmination of the redemption of God. As the narrative goes, the people were delivered from Egypt, and this deliverance led to the revelation at Sinai, which was the ultimate goal, to give the people God’s Word, and to have it written upon their hearts. According to Midrash Sifrei Bamidbar 101, the rabbis say the tablets of stone were made of sapphire, a symbol of the heavens and God’s throne.

The words of the ten commandments were said to be written by the finger of God (Shemot / Exodus 31:18). In the Talmud, Shavuot is referred as the wedding day between God and the Jewish people. The Lord God in heaven is the groom, and the Jewish people are the bride. The Torah represents the ketuvah (marriage contract) and the midrash states that Mount Sinai was lifted high above the heads of the people as a chuppah (wedding canopy) when the people stood before Sinai to receive God’s Word. In addition to this, the book of Ruth is traditionally read. Ruth was a Moabitess, a non-Jew who converted to the Jewish faith and became part of the lineage of King David and the Messiah Yeshua through the love of a kinsman redeemer (Ruth 1:16). These things demonstrate for us the love and mercy of God providing opportunity for every man to enter into a covenant of faith with the Lord God of Israel. During the Temple times, Shavuot was recognized as both an agricultural festival and one that commemorated the giving of the Torah. Shavuot is one of the shelosh regolim, the three festivals in which men were commanded to stand before God at the Tabernacle. In the NT, we are told how Shavuot became a festival of the writing of God’s Word upon our hearts through the giving of the Holy Spirit of God to His people. The Torah describes the day of Shavuot marked the day of a great and dramatic revelation from God, with signs of fire, sounds of thunder, and the blasting of the shofar, and an appointed time when Moshe first ascended to receive God’s revelation, that is connected to the descending of the Holy Spirit of God upon the followers of the Messiah from Zion. Shavuot represents the fulfillment of God’s promises, the empowering of His people, and the love of redemption, and the revelation of God’s presence to His people. Both Jew and Gentile are offered opportunity to enter into a covenant with God as the bride of the Messiah, from every tribe and tongue to become a part of the kingdom of God. In the Messiah Yeshua, we have faith and God gives his Spirit to dwell in our midst and to be our God. The ultimate plan of redemption, the gospel message, is laid out in the pages of the Torah, and in Yeshua we have the love and mercy of God, and the fulfillment of the prophetic message from Jeremiah 31:33 which states, “I will put my law in their inward parts, and write it in their hearts!” We have a God who is loving and merciful, and a Messiah who gave his life for us! What a Wonderful God we serve!

Bits of Torah Truths, Parashat Pinchas, My Food and My Offerings