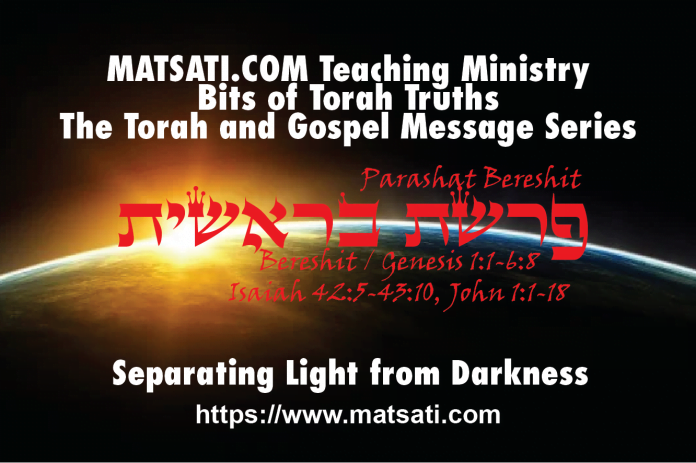 The creation of light (righteousness) and the separation of light from darkness, this is the first of God’s creative acts, Bereshit / Genesis 1:3 Then God said, ‘Let there be light’; and there was light. (NASB, ג וַיֹּאמֶר אֱלֹהִים יְהִי-אוֹר וַיְהִי-אוֹר:) The parallel is to the first of God’s creative acts in our hearts, to reveal to us the meaning of righteousness as opposed to sinful living. The rabbis teach the light that was revealed in the beginning was not from the sun, moon, and stars, these had not yet been created. This is what the Scriptures describe according to the creation account in Bereshit / Genesis 1-2. The light that was revealed was the righteousness of God! Therefore, the creator God in the bible is associated with the purest form of righteousness and truth, the Lord God shows forth His glory through His righteousness and mercy. The first thing that is addressed following the creation account (Bereshit / Genesis 1 from God’s perspective, and Bereshit / Genesis 2 from man’s perspective) was to deal with the concept of obedience. Both Adam and Eve learned what it meant to obey God’s Word in relation to the tree of the knowledge of good and evil. Having been given the command, and having looked upon the tree, the appearance of the fruit caused one to desire it. This indicates for us that man’s desires are activated by his eyes, by what he sees. (Tur HaAroch, Bereshit / Genesis 3:6, Part 2) Judging what is good to eat merely by sight is questionable since we also require the sense of smell and touch, and taste. Here Eve decided to eat based merely upon what she saw. John describes this in the following way:

The concepts put forward here are that man’s desires are activated by what one sees, in this case, Eve saw and desired what was forbidden. This is described as the desires of the flesh, the eyes and pride of life, and this is not from our Father in heaven (1 John 2:16). The appetite of the flesh can affect how we live, what we do, and is related to eternal life. The parallel is to what we eat, what we bring into our bodies that becomes a part of us. This is where the concept of fasting comes from, depriving the body of food to beat down the desires and to devote ourselves to prayer. This is connected to the gospel message in the sense of repentance, humbling ourselves, beating back the body, walking in the Spirit, the indwelling of God’s Spirit (His leading us in our daily lives), the obedience to His Torah, and being a part of His kingdom. The Torah describes the things we are to turn back towards (repentance) to God’s holy and righteous ways. When Adam and Eve sinned, they bore the consequences, then the Lord brought skins for them to cover their bodies, and this alludes to the Lord making atonement in blood on their behalf. The basic tenants of the Gospel Message, to repent, to turn towards God’s Ways, and to seek His forgiveness, all come out of the opening passages of the Torah portion. All of these concepts are important and provide us with reasons for opening God’s Torah, reading His Word, and believing in our Father in heaven and His Messiah Yeshua. Following the sin of Adam and Eve, the earth was cursed (corrupted) as a part of Adam’s punishment to spend the rest of his days toiling in agricultural farming. The prophet Isaiah defines the difference between wickedness and unrighteousness in the following way:

Isaiah 55:6-9
55:6 Seek the Lord while He may be found; Call upon Him while He is near. 55:7 Let the wicked forsake his way And the unrighteous man his thoughts; And let him return to the Lord, And He will have compassion on him, And to our God, For He will abundantly pardon. 55:8 ‘For My thoughts are not your thoughts, Nor are your ways My ways,’ declares the Lord. 55:9 ‘For as the heavens are higher than the earth, So are My ways higher than your ways And My thoughts than your thoughts. (NASB)

According to Isaiah, wickedness is related to what we do, and unrighteousness to what we think. The Lord God is not just concerned with what we do, but also in how we think. This draws us back to the concept of the lust of the eyes that John spoke about in 1 John 2:15-17. “Do not love the world or anything in the world.” Simply put, the command against coveting is designed to speak about the lust of the eyes, the desire to possess something that has visual appeal. The lust of the eyes is the first part of temptation. Part of the reason Eve listened to the serpent was due to her looking upon the forbidden fruit. The visual image is what led to Eve being entrapped. This is what was going on when Yeshua was being tempted in the wilderness, the Evil One showed him the kingdoms of the earth and their splendor to see if he would covet earthly power. Our goal in life is not to keep up with the Joneses, but to surrender ourselves to Yeshua, to know Christ the Messiah and the power of his resurrection and the fellowship of sharing in his sufferings. (Philippians 3:10) The emphasis is to having faith and being faithful, we are in the process of learning to be faithful, and the story of Cain and Abel describes what happens when we do not choose to walk in God’s ways. Cain did not turn from his ways and his sinfulness brought him to kill his brother. Cain chose to bring the Lord a sacrifice by his own means, as opposed to asking the Lord God to help him to produce the kind of fruit God wanted in his life. The Torah explains to us how even in a perfect state, we are given to make the wrong choices and sin against God. This is why we need the Lord God’s help to live a righteous and holy life.
The rabbis pick up on the differences between the way the Hebrew text is written (see Rabbeinu Bahya, Bereshit 4:2 Part 1), the Torah describes a significant difference between the two brothers by their choice of work. One chose Farming which involves the planting watering, and then waiting with lots of time to spare. The other chose Shepherding which requires daily observation and constant care. Abel was righteous, and Cain was wicked, note how Isaiah 55:6-9 describes wickedness to what we do, and unrighteousness to how we think. The apostle Paul teaches us faith enables us to understand God’s Torah as what it means to be faithful before God. If we have a second look at what Paul wrote to us in Romans and Galatians, we can see how he speaks of faith, righteousness, and the Torah going hand-in-hand together being coupled to faithfulness. He writes with such enthusiasm that he says in Romans 3:31 Do we then nullify the Law through faith? May it never be! On the contrary, we establish the Law. (NASB) Following this statement Paul goes into a deep discussion about the righteousness of Abraham which was based upon faith (see Romans 4). Paul’s interpretation of Bereshit / Genesis 15:6 states “Abraham believed God and was accounted to him as righteousness” is in the form of a Jewish midrash. Paul uses midrash to draw out the deeper meaning of righteousness with Abraham as the example given to us from the Scriptures. Paul calls believers to respond in faith like Abraham, and Yeshua calls for the same according to John 8:31-47. We are to have faith like Abraham and then move our lives in faithfulness before God. This is what Yeshua meant when he said “If you were Abraham’s children, then you would do as Abraham did.” (John 8:39) The Lord God enters into our lives by faith, and true redemption follows by embracing the new life that God is calling us into, to walk in the Messiah’s footsteps. “By faith we live” illustrates a supernatural strength that is given from God that enables us to walk in God’s ways, to live according to His Word and be a part of His Kingdom. (Galatians 5:21) According to Paul, we are to look for these things in our lives, for the Lord God by His Spirit drawing us away from sin, and towards His righteousness and truth. The Torah speaks of the “life of righteousness” and defines for us the “way of righteous living.” The message of the Torah is that our faith is to be lived out in the way of righteousness as we believe in the Messiah and receive empowerment in our lives from God’s Holy Spirit to overcome sin, to bear God’s testimonies, and to bring glory to His Name! This is how the Torah is an inseparable part of the Gospel message!

Parashat Ki Tisa, Trust in the Lord for Your Salvation