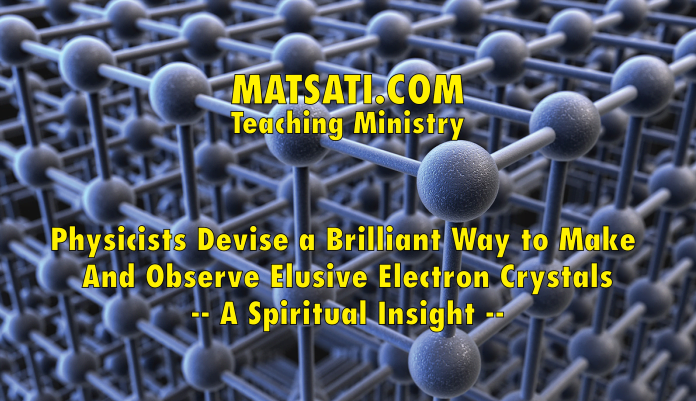 Eugene Wigner, a theoretical physicist, published a paper in 1934 [1] where he proposed a new type of crystal may be observed if the density of negatively charged electrons in an electron gas could be be maintained below a certain level, the subatomic particles could be confined to a repeating pattern to form a crystal of electrons, this is known as a Wigner crystal. In the 1934 publication [1] Wigner makes an attempt to develop a more general expression of the wave equation representing free electrons in metals, that is provided by the Hartree method of the self-consistent field. In the standard wave function at this time (1934) there was no statistical correlation between positions of electrons with antiparallel spin. The purpose of the generalization Wigner proposed is to allow for such correlations. This would lead to an improved wave function and therefore a lowering of the energy value calculated. The first time a Wigner crystal was experimentally observed was in 1979 [2] when researchers observed an electron-liquid to electron-crystal phase transition using helium. Since then these electron crystals have been detected numerous times.

The idea behind experimentally observing these Wigner crystals is to get the electrons to sit still long enough to create a crystal. Physicists use a method of trapping the electrons between a pair of two-dimensional semiconducting tungsten layers. Solids in inorganic chemistry generally form a lattice of atoms that are arranged in a fixed 3D repeating grid structure. Because of the lattice arrangement of atoms in a material, It is possible to bounce x-rays off the surface of a material (x-ray diffraction) to measure the diffraction pattern and corresponding arrangement of atoms in the lattice. Wigner’s idea of electrons he said that electrons may be capable of being arranged in a similar fashion to form crystals, but this would work only if the electrons were stationary.  The idea is if the density of electrons was low enough, the Coulomb repulsion between electrons would produce potential energy that should dominate the kinetic energy of the electrons, resulting in the electrons remaining relatively stationary. This is the difficulty in experimentally observing of this phenomenon. Electrons are not governed by Newtonian physics, they are quantum mechanical. So no matter what you do to them, they are always moving around. Because of this the crystals would always have the tendency to melt because the electrons continue to move. In order to perform this type of study, researchers needed to trap the electrons in some way. In 2018 MIT researchers used graphene known as a moire’ superlattice [3] to trap electrons. What happened was 2D grids were superimposed with a slight spin and regular patterns emerged. The researchers at Cornell also used a moire’ superlattice using two semiconducting layers, tungsten disulfide (WS2) and tungsten diselenide (WSe2). When these layers were overlaid they formed a hexagonal pattern allowing for control of the electron occupancy at any specific moire’ site. The researchers then carefully placed electrons in a specific place in the lattice using computational chemistry (theoretical prediction) to determine the correct occupancy ratio to form crystals. In addition to this, one has to be careful how the electrons are probed so as not to disturb the arrangement of electrons. This difficulty was overcome by using insulating layers of hexagonal boron nitride. An optical sensor was used and placed near the sample but not touching, researchers positioned the sensor 1 nanometer from the surface separated by a boron nitride layer which prevented electrical coupling (insulator layer) of the tungsten alloy with the sensor. This allowed researchers to detect electrons in the moire’ superlattice in a variety of crystal configurations, including triangular Wigner crystals, strip phases, and dimers.

This achievement illustrates how fundamental research in these theoretical constructs on moire’ superlattices have great potential for quantum physics research. The theoretical and experimental validation technique allows for the greater study of quantum many-body problems with a method for experimentally validating the simulations. This work will help validate experimentally future work on the two-dimensional Hubbard model (spin models) with long-range charge-charge and exchange interactions in quantum physics.

The Spiritual Insights that we receive from this type of research is related to the idea of Coulomb repulsion between electrons producing potential energy that should dominate the kinetic energy of the electrons, resulting in the electrons remaining relatively stationary. This is the difficulty in experimentally observing the phenomenon of electron crystals because electrons are not governed by Newtonian physics, they are quantum mechanical. So no matter what you do to them, they are always moving around. Because of this the crystals would always have the tendency to melt because the electrons continue to move. As a result, in order to perform this type of study, researchers needed to trap the electrons in some way. These things are related to our ability to keep Torah. The Holy Spirit functions as a trap in the sense of the electron trap for the specific crystalline arrangement of the electron gas into structures. The Holy Spirit in parallel fashion functions to help us to walk according to the Spirit, by conforming us unto the likeness of God’s Son Yeshua. Paul wrote in Romans 7, walking according to the Spirit is synonymous to keeping us from sinning by keeping God’s commandments. These are very important concepts the scientific research is drawing out for us today. The concept of the Spirit of God constraining our lives is a very Torah centric principle. In fact, Moshe wrote the following concerning these things in relation to the command of God and our ability to keep the commands.

Now there is something that is very important to realize about what Moshe is writing here in the Torah concerning the commandments of God. He states specifically that these commandments are not difficult nor are they out of reach. (30:11-12) this is in the context of all of the Torah. This suggests for us that it is not impossible for one to obey the commands of God. Many who read Paul’s letters, specifically in the book of Romans, may get the impression that it is impossible to keep the commands of God. This is not what Paul was discussing in the book of Romans. He was not anti-Torah in the sense of saying that one doesn’t need the command’s of God or that the commands are impossible to keep, or that the Law of God is evil, or anything like that. Paul’s writings are in fact actually very pro-Torah, with a slight spin on obedience from a Torah perspective. We see here according to Moshe that the commandment was given for life and prosperity and so that we may know the difference between life and prosperity and death and adversity. (30:15) Moshe states that by keeping the commands, one may live and multiply as a result of the blessing of God. We also have the antithesis of this, if one refuses to live by the commands, one will find death and adversity. The point Paul was making is in relation not of whether one was capable of obeying a command, but rather, he discussed the commandments in relation to two major points, (i) we are not able to be consistent day-in and day-out all of our lives perfectly keeping the commands, and (ii) we are not to rely upon the our own righteousness, that is, we are not to rely upon our ability to keep the commands as being justified before God in our sins. Paul draws from the Torah to make this argument as we read according to Devarim / Deuteronomy 9:1-6.

Here Moshe writes about the reasons for God bringing the people into the Promised Land. He speaks of the Lord God going before them to drive out the nations that are before them, and then he points out that it is not because of their own righteousness, nor is it by reason of the uprightness of their hearts that they are entering in to possess the Land. (9:4-5) this is the primary point Paul writes about in his letter to the Roman’s. The fulfillment of the promises of God is primarily due to the Lord God fulfilling His promise to their fathers, Abraham, Isaac, and Jacob. In Devarim / Deuteronomy 30:5-6, Moshe makes this point again, but he couples this with something else, saying the following, ה   וֶהֱבִיאֲךָ יְהוָֹה אֱלֹהֶיךָ אֶל-הָאָרֶץ אֲשֶׁר-יָרְשׁוּ אֲבֹתֶיךָ וִירִשְׁתָּהּ וְהֵיטִבְךָ וְהִרְבְּךָ מֵאֲבֹתֶיךָ: ו   וּמָל יְהוָֹה אֱלֹהֶיךָ אֶת-לְבָבְךָ וְאֶת-לְבַב זַרְעֶךָ לְאַהֲבָה אֶת-יְהוָֹה אֱלֹהֶיךָ בְּכָל-לְבָבְךָ וּבְכָל-נַפְשְׁךָ לְמַעַן חַיֶּיךָ: 30:5 ‘The Lord your God will bring you into the land which your fathers possessed, and you shall possess it; and He will prosper you and multiply you more than your fathers. 30:6 ‘Moreover the Lord your God will circumcise your heart and the heart of your descendants, to love the Lord your God with all your heart and with all your soul, so that you may live. (NASB) Here Moshe points out two things, (i) God is fulfilling the promise He made to Abraham, Isaac, and Jacob, and (ii) God is going to circumcise the hearts of His people. This circumcision of the heart is something Paul draws out in his letter to the Romans, as it is related to God’s presence coming to dwell within His people, the gospel message that was spoken to the people in the wilderness (Hebrews 4) and what is being brought to completion in our faith in Yeshua the Messiah. Paul argues from a Torah based perspective, that our entry into God’s promises is by faith, and is not a function of our own righteousness, in fact, we at one point in our lives will fail to obey the commands, and are thus guilty before God. We need both faith and blood atonement before God, both of which we receive in Yeshua the Messiah. The scientific research on the idea of the trapping electrons and the Coulomb repulsion between producing potential energy, leading to an electron crystal tends to draw this out. The electron trapping allowing observation of the electron crystal is paralleled in the presence of God in our hearts and our lives. The Holy Spirit of God, specifically, God’s presence in our lives and in our hearts function to keep us from jittering from one sin to the next. God’s Spirit keeps us and our lives in alignment with God’s Word. Now because of the nature of electrons to always move, these crystals have the tendency to melt because the electrons continue to move. This is analogous to our also always having this tendency to drift in our walk before God especially in matters of speech, how we talk to others. These things we are discussing are not automatic however. We must be actively pursuing the righteousness of God. Take for example our language, the words that we use.  There’s a childhood saying that “sticks and stones may break my bones but names will never hurt me.” The truth is, though, that words can indeed inflict pain, and sticks and stones and names all cause lasting damage. It is so easy to hurt others by our words, which is a violation of a Torah command on Lashon Hara. Paul wrote that we need God’s help in everything we do in life. We need His Spirit to constrain our lives for His glory, just as we see scientists constraining the electron to observe the electron crystal.

Do Molecular Simulations Represent the Real World at the Atomic Scale? – A Spiritual Insight

4 Signs You’re Infected with a Parasite – A Spiritual Insight

Bits of Torah Truths, Parashat Balak, The Sin of going through...