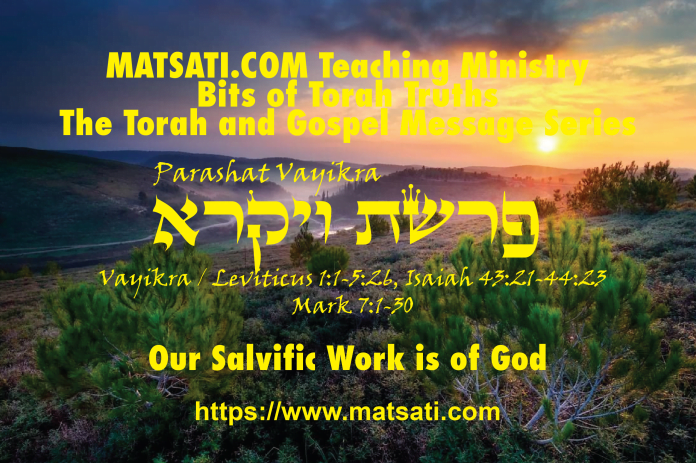 There is a very important message that is being told in the book of Vayikra / Leviticus that comes to light as we continue to study the Torah year after year. The book of Leviticus opens on the bringing of a sacrifice due to various sins. These words in the opening chapter of the book of Vayikra / Leviticus are designated for a Covenant people. This is as significant point, the reason being, the offerings and sacrifices were not a means for meriting the covenant relationship before God! Throughout the book of Shemot / Exodus we read how the Lord God delivered Israel in a powerful way from bondage and slavery and this was based upon His promises, not upon a work of Israel. God’s desire was to have His Spirit dwell in their midst. The narrative on Leviticus states that when one unwittingly sins he was to repent and bring the prescribed sacrifice. When one willingly sins, he was also to repent and determine not to repeat his sin, then he was to bring the appropriate sacrifice before the Lord being symbolic of an innocent life taking on his or her sin, and the person receiving forgiveness from God. The sacrifices were a means to draw near to the Lord God of Israel. As we study the Scriptures, 1400 years later, we are told in the book of Hebrews that the blood of bulls and goats never took a way sin. (Hebrews 10:4) This is an important interpretation in relation to what we are reading here in the book of Leviticus, the priest makes atonement on behalf of the sinner and the sinner receives forgiveness. Notice how in the Hebrew text, the focus is shifted to the priest, to the one who makes atonement on behalf of the sinner. This is what the author of the book of Hebrews was showing causing us to realize the primary importance of the command was not in the sacrifice itself, but upon the one who makes atonement on our behalf, the high priest.

Hebrews 10:10-18
10:10 By this will we have been sanctified through the offering of the body of Jesus Christ once for all. 10:11 Every priest stands daily ministering and offering time after time the same sacrifices, which can never take away sins; 10:12 but He, having offered one sacrifice for sins for all time, sat down at the right hand of God, 10:13 waiting from that time onward until His enemies be made a footstool for His feet. 10:14 For by one offering He has perfected for all time those who are sanctified. 10:15 And the Holy Spirit also testifies to us; for after saying, 10:16 ‘This is the covenant that I will make with them After those days, says the Lord: I will put My laws upon their heart, And on their mind I will write them,’ He then says, 10:17 ‘And their sins and their lawless deeds I will remember no more.’ 10:18 Now where there is forgiveness of these things, there is no longer any offering for sin. (NASB)

Vayikra / Leviticus 5:13
5:13 So the priest shall make atonement for him concerning his sin (וְכִפֶּר עָלָיו הַכֹּהֵן עַל-חַטָּאתוֹ) which he has committed from one of these, and it will be forgiven him; then the rest shall become the priest’s, like the grain offering. (NASB, יג וְכִפֶּר עָלָיו הַכֹּהֵן עַל-חַטָּאתוֹ אֲשֶׁר-חָטָא מֵאַחַת מֵאֵלֶּה וְנִסְלַח לוֹ וְהָיְתָה לַכֹּהֵן כַּמִּנְחָה:)

The text states “So the priest shall make atonement for him concerning his sin” (וְכִפֶּר עָלָיו הַכֹּהֵן עַל-חַטָּאתוֹ) making clear who it is that is making atonement. The sinner is not making atonement for himself. This is a common misunderstanding in Christian Theology! Under the Law of Moses, the sinner does not merit his forgiveness, it is the priest that brings atonement on behalf of the sinner. In fact, we are told in the Torah that the priest consumes a part of the sacrifice for the purpose of bearing sin and then going before God to make atonement on behalf of the sinner. (see Vayikra / Leviticus 6:26) This tears down the false theologies of “Law-vs-Grace” which pits the Torah against the grace of God presuming these are opposites. These things demonstrate for us how a proper understanding of the Scriptures brings proper interpretation and doctrine! This also draws in an important point that it always has been by faith that we enter into the covenant agreement with God, from the very beginning! This is what we see happening here in Vayikra / Leviticus 5:13, the priest making atonement for the sinner concerning his sin. The sinner needed to move by faith to come before God obeying His Word and seeking forgiveness buy the help of the priest. When we take our time to go through the book of Vayikra / Leviticus, rather than rushing through thinking this section of Scripture is boring, these things become apparent and are very relevant for us as we study and learn more about the Messiah Yeshua!

In the opening chapters of the Torah we learn that there are five types of sacrifices (korbanot) that are detailed. The following is a list of these sacrifices!

Note in all the sacrifices and their descriptions given in the Torah, there is no explicit sacrifice for deliberate, intentional, and willful sins against the LORD. What comes with willful sin is punishment by an early death. As we see written in the book of Hebrews, atonement was made through the blood of the sacrifice, and atonement was offered by the anointed High Priest who would sprinkle the blood of the sacrifice seven times before the Mishkhan (Tabernacle), before the golden altar of incense opposite the perochet (the curtain inside the Tabernacle), and upon the Ark of the Covenant between the Cherubim within the Holy of Hollies. We are told these are the things Yeshua had done in heaven in His offering of sanctification and reconciliation before God. We are told in Vayikra / Leviticus 17:11

The blood of the sacrifice is what was needed for atonement in the issue of sin, the innocent taking on the penalty for the guilty. This agrees with the teaching in the NT according to Hebrews 9:22, “Without the shedding of blood there is no forgiveness.” In the Talmud Bavli Yoma 5a it is likewise written, “There is no atonement without blood.” These things describe to us how the shedding of blood, the “life-for-life” principle, is and essential part of the Gospel Message. This is what it means that Yeshua offered His own body up as a sacrifice for sins. By His blood we are given atonement before God. The Torah foreshadowed these things, and so following through according to the Torah, and based upon the Torah, it is by faith that we enter into the covenant and are given a solution to the problem of sin, being given a promise that God will dwell in our midst! Under the covenant that we have in Yeshua, which is founded upon the Torah, we have the forgiveness of sins (Hebrews 7:27, 9:12, and 9:25-28). The Scriptures say that Yeshua offered once and for all a sacrifice for our sins (Hebrews 9:11-14, 9:24-28, 10:11-20). While studying the NT, in Greek we are able to see the parallels, such as in Romans 3:25:

The Greek word ἱλαστήριον (hilasterion) is the same word used in the Septuagint (LXX) for the kapporet, the cover of the Ark of the Covenant in the Holy of Hollies which is sprinkled with blood of the sacrifice. The idea here is Yeshua made atonement on our behalf, and having faith that He did this, confessing our sins, we have the forgiveness of sins before God as a result of what He has done. The most important thing that we are being taught here is how the Torah does not teach us that man is able to make himself spiritually clean, this is a salvific work of God. The purpose of the purity laws and those regarding what is clean and unclean is to train us to separate ourselves from the world, to make a distinction between what we should and should not be doing because we are the people of God and God has made us holy. We are holy because God has made us holy and thus calls us to live holy lives. How do these things fit with the modern theologies of today teaching on Yeshua the Messiah? The Scriptures say that we are sanctified in Him. This is true just as we have been studying here today! The book of Hebrews is emphasizing the importance of the Messiah who came to make atonement on our behalf. Hebrews 10 does not do away with the blood of bulls and goats at the Temple in Jerusalem (if it were rebuilt). The Sacrifices coupled to the High Priest function as an expectation testifying of the finished work of Yeshua the Messiah. This is how Paul was continuing in the Temple service under the vow of a Nazarite which included a whole burnt offering, a sin offering, etc, and the connection to physical impurity. I have actually heard it said Paul was fooling the Jews in his day by performing the vow of the nazarite and bringing the whole burnt offing, sin offering, Minchah, etc. This type of interpretation is clearly anti-Torah and anti-semitic.  The Scriptures tell us we have access to our Father in heaven in His Son, Yeshua the Messiah. As can be seen here according to the study, this is a very complex topic, but yet we are able to understand all of these things as Yeshua, his death, burial, and resurrection, as not doing away with God’s word according to the book of Vayikra / Leviticus. The book of Hebrews states that we do have a better sacrifice in the Messiah of God. The Scriptures place emphasis upon our faith in the One whom God had sent to save us, just as we see here in the book of Vayikra / Leviticus in the priestly duties leading to our forgivness for sin.  These things reveal to us how our salvific work is of God, and we as a covenant people are responders.  We respond to God’s Word and live according to God’s word demonstrating how we have the Spirit of the Living God dwelling within us, and in our hearts! This is how the Torah and the Gospel Message go hand in hand!