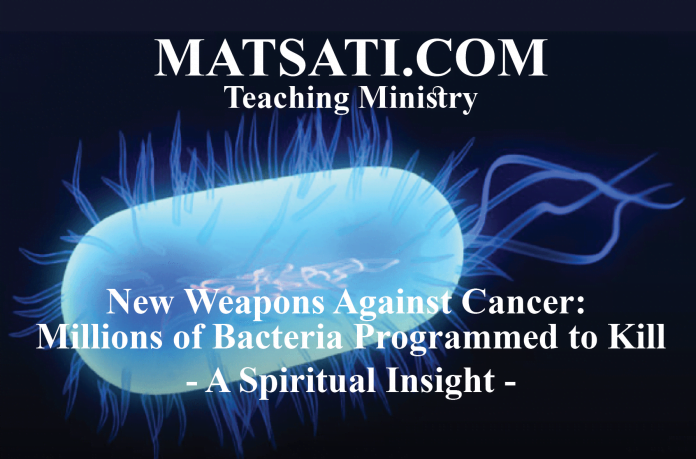 I read a recent news article that stated “Scientists have used a genetically reprogrammed bacteria to destroy tumors in mice.” The idea is to use a reprogrammed bacteria as a cancer therapy that is capable of treating the disease more precisely with the hopes of eliminating the side effects of conventional therapies. The up-side is this is working great in studies using mice. The down-side however is that the success in mice does not guarantee this will work in humans. The research paper was published in the journal of Nature Medicine. [1] Some researchers are focusing their efforts on using this technique of genetically reprogrammed bacteria to be able to selectively release therapeutic payloads in vivo. This study proposed using an engineered non-pathogenic Escherichia coli strain to specifically lyse within the tumor microenvironment and release an encoded nanobody antagonist of CD47 at an anti-phagocytic receptor that is commonly overexpressed in several cancer types. This allows for the tumor infiltration of T-cells which stimulates rapid tumor regression, prevents metastasis, and leads to long term survival in the mice. The biological mechanism follows along the life and death of red blood cells which have a protein called CD47. This protein prevents the immune system from eliminating the old cells to make way for new ones. For example, as red blood cells age, they lose CD47 and so the process of renewal of the red blood cells begins. Mutations in cancer cells cause them to switch on the CD47 gene. The immune system sees these cells as normal and allow them to grow causing damage to the body. Scientists used genetically modified bacteria to deliver the antagonist of CD47 directly to the cancer cells which would signal the immune system to destroy the tumor after its protective protein layer is removed. This research paper demonstrates the proof of concept of the engineered bacteria along side of the manual injection of the CD47 at the tumor location, both methods induced the tumor shrinkage validating the engineered bacteria technique works, and may be safe for use to deliver the immunotherapeutic payloads.

The spiritual insights we receive from this research is in regards to design, programming, and purpose. While studying the Zohar, Kabbalah presents a description of Creation that parallels the description in the first chapter of the Torah (Bereshit / Genesis). The Zohar details a sequence of events that coincide with the Torah description of the first few verses that describe the events (First day, Second day, etc) and stresses the role of God in the process of creation, the light, the Hebrew Aleph-bet, the Torah, man, and the creation of the world (universe) as we know it. What we observe in the descriptions of creation kabbalistically provides details about what is going on in the spiritual realm, and then the corresponding effect in the physical world (Malchut). For example, in Bereshit A45.428 the Sefirot of Malchut (Earth) rests upon Yesod, and the rabbis call the Sefirot the supernal plants, referring to Chesed, Gvurah, Tiferet, Metzach, Hod, and Yesod of Zeir Anpin being attached to Malchut (the Earth). This is alluded to as the cedars of Lebanon, the six days of creation, in the spiritual realm which have a physical counterpart on Earth. Another example taken from Zohar Volume 1 Bereshit A45.420 speaks of the tabernacle that was erected (see Shemot / Exodus 40:17) and the zohar states this corresponds to the tabernacle that was erected above in the upper world. The conclusion is that there is a heavenly counterpart, similar to what we read according to Hebrews 8:5 who serve a copy and shadow of the heavenly things, just as Moses was warned by God when he was about to erect the tabernacle; for, “SEE,” He says, “THAT YOU MAKE all things ACCORDING TO THE PATTERN WHICH WAS SHOWN YOU ON THE MOUNTAIN.” (NASB) This shadow of the heavenly things suggests that there is a representation in the way of a copy in heaven. This denotes a reality of something God has established in the heavenlies, in the spiritual realm, that Moshe built to be represented in the midst of God’s people in the physical realm. With the advent of scientific discovery, the physical universe has been revealed to be by and far more complex, mysterious, and wonderful, than anyone could have imagined (like we described last week). The Zohar provides a framework for the various correlations of the spiritual world to this physical world, just as we are learning in this series titled “Science and Spirituality.” One of the basic visual aids in kabbalah is the Sefirot which relates the ten emanations of God through which the world was created. From the Scientific literature, one notable feature of string theory is that these theories require extra dimensions of spacetime for their mathematical consistency. It is interesting how Superstring theory proposes this universe consists of 10 dimensions. This is consistent with the spiritual framework of kabbalah of the ten sefirot. Coupled with this idea of physical and spiritual counterparts is the idea of divine programming and purpose. We were created after the image of God according to His great purpose. One of the first of God’s creation was the light, the letters, and then the Torah. Because of this, God made man in his image such that he may fulfill the Torah and the mitzvot of God. These things describe the Lord God almighty preparing a programming language from the beginning, in the creation of the world. Similarly, we also see a programming language in DNA, such that this type of research of genetically modified bacteria is possible. As the Lord God was able to create and design these things, we were made after God’s image, we too are able to learn, create, and manipulate (subdue) this world for our purposes as well. In the kabbalistic approach, the divine light and the ten Sefirot, every entity of the spiritual world descends into the physical realm of the world below (Malchut). One of the things about Superstring theory is that we inhabit a 10-dimensional universe. Of these 10 dimensions, we are aware of 4 (3D and time) while the remaining six we are not capable of perceiving, which is the dimensional representation of the spiritual realm.

The most significant point about these things is related to the spiritual insight of design, programming, and purpose. One of the purposes of the Torah (being with God from the beginning) is for examining ourselves before a holy God. When left to ourselves, we often do not know what we really look like, and this is the purpose of God’s Torah, to expose us to righteousness, holiness, justice, and truth, so that we are able to know whether we are living our lives in a pleasing or displeasing way. Paul wrote in Romans 7:7 What then shall we say? That the law is sin? By no means! Yet if it had not been for the law, I would not have known sin.” (NASB) and to the Galatians he wrote “Why then the law? It was added because of transgressions…” (Galatians 3:19) Paul is explaining how the Torah functions to show us how far we have deviated from God’s standard, from the spiritual counterpart, from His original design criteria, etc. Because of the Torah, sin can be clearly specified, measured, and quantified (Romans 3:20, 4:15, 7:7). This suggests that it is possible to define sin by an empirical scientific method, therefore each act, attitude, or transgression may be understood as either keeping the mitzvot, or violating the mitzvot of God! Because of these things, the Torah testifies to the righteousness of God through mercy, faith, and faithfulness. This Torah based testimony is understood through obedience, and that obedience is a byproduct of our faith, it is the act of being faithful to God, His Messiah, and His Word. This is why the author of the book of Hebrews states in Hebrews 11:6 “And without faith it is impossible to please him, for whoever would draw near to God must believe that he exists and that he rewards those who seek him.” This leads to the concept of being created after His image, we reflect His image which means “to glorify God is to manifest His image.” The Torah expresses God’s holiness, His righteousness, His truth, and His love. Therefore, when we obey God’s word, we glorify him (Romans 2:23-24). These concepts are not about counting upon our own righteousness, because we always fall short, therefore we seek the righteousness of the Messiah of God (Yeshua) and the mercy of our Father in heaven, as we continue to live our lives for Him, seeking His help by the power of His Spirit in our lives. The Torah functions therefore as a sign marking those who are His, those who have faith, those who are living faithfully to Him. We read in the Zohar, that Zeir Anpin is the Torah, and this emanation descended to Malchut (Earth) but not just this, it was through Zeir Anpin the world was created. This is where the idea of the World being created through the Torah, and as the Apostle John wrote the Word became flesh (Yeshua) and Paul writing to the Colossians that it was through him (Yeshua) all the world was created and has its being. The point is the purpose of God’s Torah is as a spiritual pattern through which God’s people are to conform their lives, in morals, ethics, love, and mercy. The Torah also exposes our shortcomings, our sins, and makes us realize we need God’s mercy every day! The purpose of God’s law is to point us towards the way of righteousness that comes through faith in the Messiah Yeshua. In addition, the purpose of God’s Torah is to show us how to glorify God by reflecting his image as we express our faith in love and obedience. And finally, the purpose of God’s law is to offer a sign of obedience on those who are saved by faith; for we are not saved by works but works show that we are already saved through faith by the mercy of the Lord God Almighty, our Father in heaven!

The Lord God Almighty as both a Redeemer and a Destroyer, פרשת בא, Parashat Bo, Bits of Torah Truths – Digging Deeper

A Hardened Heart and the Removal of the Path to Repentance? פרשת וארא, Parashat Va’era, Bits of Torah Truths – Digging Deeper

Does the Lord’s Promise to be with Us Guarantee We will not be Harmed? פרשת שמות, Parashat Shemot , Bits of Torah Truths –...