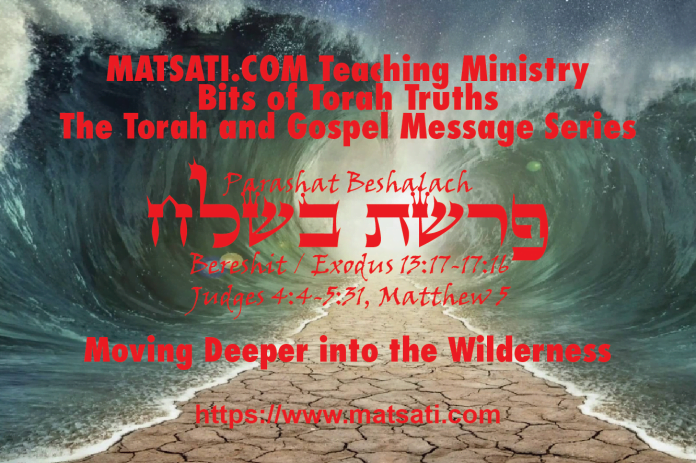 This week’s Torah Portion contains a vast amount of information. A lot of things take place, Israel leaves Egypt, the pillar of cloud and fire stood between Egypt and Israel (Shemot / Exodus 13:17-22), the Lord delivered Israel from the Egyptian Army through the Red Sea (Shemot / Exodus 14:1-30), the people tested the Lord with the bitter water turned sweet at Marah (Shemot / Exodus 15:22-27), the Lord provided bread from heaven to test the people (Shemot / Exodus 16:1-36), the Lord providing water from the rock (Shemot / Exodus 17:1-7), and the Lord helps Israel defeat Amalek (Shemot / Exodus 17:8-16). Israel had passed through the Red Sea, the Egyptian army had been killed, and the Israelites traveled to a place with bitter water and then to an oasis with palm trees at a place called Elim. After spending some time there, Israel moved on deeper into the desert to a place called midbar Sin (מִדְבַּר־סִין) the desert of Sin. This was approximately half way to the mountain of Sinai, and it was at this point when the people’s food provisions had begun to run out and so Israel grumbled against Moshe and Aaron saying according to Shemot / Exodus 16:3 “If only we had died by the hand of God in the land of Egypt, when we sat by the pots of meat, when we ate bread to our fill, for you have brought us out into this desert to starve to death!” The Lord God told Moshe that he is going to rain down bread from heaven (לֶחֶם מִן־הַשָּׁמָיִם) so the people may eat (Shemot / Exodus 16:4). We are told that this was provided as a way to test the people. The rabbis believe this was meant to test the people for the command of the Sabbath rest at Sinai. The Manna (bread from heaven) was symbolic of God’s provision for his people. The Lord God Almighty provided a meal for His people when they were in need. The way the Manna was given to the people, it appeared in the morning, and it melted as the heat of the day grew, suggests for us that one must take the opportunity when it is given to seek the Lord while He may be found, otherwise one will suffer hunger. This may be the idea Yeshua had when he called himself the bread that is from heaven. (John 6:51) We look to Yeshua for the servant attitude on the individual level, and for sustenance and spiritual food on the spiritual level. The Manna that fell was just enough for one day’s need, and each day one had to daily collect the bread (דְּבַר־יוֹם בְּיוֹמוֹ) in order to live. One could not horde the food because it would bread worms if it was hidden away and left-over night. The testing of faith in the sense of the illustration given here in the Torah command of God on the instruction to gather only one days’ worth of food, this daily requirement, was paralleled to trusting in the Messiah, the One whom God had sent to save us from our sins. The illustration of the Manna reminds us how the truth is to be shared with family, indicated by the phrase in Shemot / Exodus 16:16 “each man for those in his tent” (אִישׁ לַאֲשֶׁר בְּאָהֳלוֹ תִּקָּחוּ) which indicates that the head of the household was responsible for collecting the Manna for his family. This illustrates the Husband is responsible for taking care of his wife and children. The Rabbis say “Anyone following My instructions not to save any of it for the following day will be considered by Me as having displayed his faith in Me. A person who has enough to eat for one day, and is worried about the morrow, is considered by Me as having displayed lack of faith in Me.” (Chizkuni on Shemot / Exodus 16:4 Part 2) Chizkuni draws out this matter of faith and one’s intentions (the motivation of heart). Remember how the rabbis state that the taste of the Manna was a function of a person’s gratitude, that for some it tasted as one thing, and for another person it tasted differently. For those who were thankful, it tasted sweet, but to those who murmured it tasted bland and unsatisfying. This matter of faith connects us to Yeshua’s claim of being the bread that comes down from heaven, he was illustrating what he was doing, teaching His people, leading his people in God’s Ways, laying down his life for his people, and being raised from the grave by the power of God (resurrection). Each of these is a Torah centric principle of Mashiach! What we are learning from these things is He who created the universe also created the means for His people to remain alive and well, emphasizing both the spiritual and the physical aspects that are drawn out in the Manna (lechem) that descended from heaven.

The Hebrew word Lechem (לחם) describes the bread that descended from heaven. This is a special type of food which had a heavenly origin. In addition to this, we find the word Lechem (לחם) being used to describe the food being burned on the altar. This bread is described by the Rabbis as being a heavenly food. Here the bread Lechem (לחם) is connected to the supernatural being of heavenly origin (angels), the sacrifices, and the meat upon the altar. It is interesting how at this point, the way all of these things are connected, we can see how God wanted to familiarize His people with the concepts of sacrifice, blood atonement, righteousness, faith, faithfulness, heavenly blessing, etc because their lives would depend on these things. The Manna also teaches us to bless God for our food, because it was a gift. For this reason we bless God for sending His Son Yeshua to die for our sins! Likewise, we consider all of life as a gift, friends, family, and all of creation, being thankful for God’s provision and care, because He provides all of these things for His glory. (1 Corinthians 10:31) These things provide for us an object lesson to prepare us to understand the importance of being led by God’s Messiah, holding to the Truth of His Word, having faith in our Father in heaven, coupled to the atoning work of Yeshua, and the spiritual food we receive from God’s Word. What we find here is the Story of our salvation unfolding in the language of the Torah.

Remember how the Torah states that the Manna was given as a test (מַסָּה) to see whether the people would walk according to God’s ways or not? The mitzvah (command) at this moment in time on the Manna, was to see if the people would honor God by the Sabbath rest, and refrain from gathering Manna on this day of rest. Each week a miracle occurred, the Manna would last two days, both Friday and Saturday, in order to have provision for the Shabbat. (Shemot / Exodus 16:5) Based upon all of these things, it is very apparent how and why Yeshua was using this illustration of Manna from the Torah to describe Himself as being the bread that comes down from heaven. The rabbinic interpretations connects all of these concepts of the one sent from heaven being free from chaff (sin), of being life sustaining both physically and spiritually, of righteousness, of wisdom, of the Holy Spirit of God (the giving of), and of obeying God’s word which preserves life as it is stated previously in the Torah portion (Shemot / Exodus 15:25-26). The Talmud Bavli Yuma 76 describes the Manna as teaching us to be dependent upon the mercy of God every day of the year. Moshe wrote in Devarim / Deuteronomy 8:3 that the Manna was given in order to be humble and to be hungry. The reason being, man does not live by bread alone but by all that proceeds (כָּל־מוֹצָא) from the mouth of God. This is why the Lord chose to provide the Manna new each day as opposed to supplying a year’s supply of food at one time. It is at this point that HaShem was opening up the heavens and pouring out His mercy (pouring down bread from heaven) that was free of chaff (Yeshua being free from sin), just as the bread was provided from heaven from before mankind and the world entered into sin (rabbinic analogy), and paralleled to the heavenly food in the Olam Haba (World to Come). Note how the Exodus from Mitzraim (Egypt) is called yetziat Mitzraim (יְצִיאַת מִצְרַיִם) and how the phrase “bread of haste” called matzah (מַצָּה) both are derived from the same root word yatza (יָצָא) meaning “to go out” or “to come forth.” This is related to the spiritual food that we receive from God when we humble ourselves and seek His Truth according to the Scriptures! These concepts connect back to Yeshua being without sin, the perfect sacrifice, the one who lays his life down on our behalf, the one through whom we are fed both spiritually and physically, all of these concepts are very rabbinic in nature, and taught to us according to the Torah! The Story of the deliverance of Israel from Parashat Shemot to Parashat Beshalach are foundational for understanding the gospel message. By these things we understand how we are being lifted up (carried) by the mercy (grace) and love of God. The affliction of hunger as in the story of the Manna reveals that only the Lord God Almighty is the sustainer of our lives! Again, this is paralleled to the bread from heaven that was without chaff, this is necessary since we need a sinless substitute to take our place in judgment. We take shelter today under the blood that was poured out from the Messiah! The rabbis say Shemot / Exodus 16:4 speaks of the bread of this earth as being physical, and the bread from heaven as being spiritual. Yeshua’s use of these concepts saying He is that bread which comes down from heaven, connects His physical life to the spiritual by His sacrificial death as the avenue of escape that God has provided to spare us from condemnation and eternal death. The message of the gospel is that one need not be Jewish to take part in this blessing. All one must do is believe in the One whom God has sent to save us from our sins and then walk in His ways! In this way we bear the fruit of the Spirit of God that dwells from within! This is how the Torah and the gospel message go hand-in-hand together!

Dr. Duane D. Miller PhD – LIVE – The Word of God has a Depth beyond our Imagination! פרשת אמר, Parashat Emor, Bits of...

The Word of God has a Depth beyond our Imagination! פרשת אמר, Parashat Emor, Bits of Torah Truths – Digging Deeper

Parashat Shemini, Let us Sanctify the Name of the Lord in...