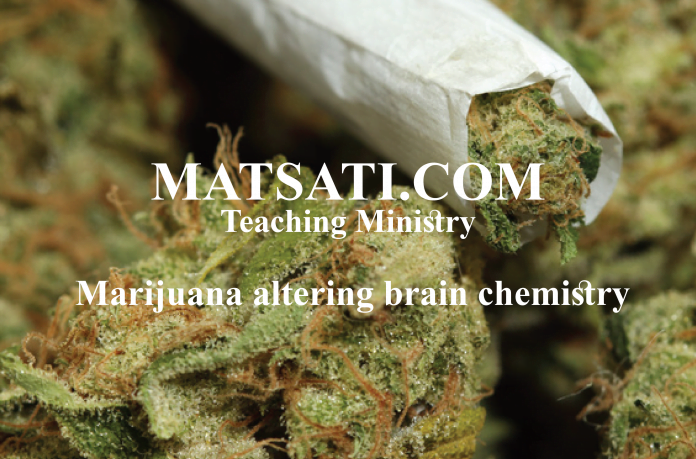 It seems more states are legalizing marijuana, but many still have concerns regarding its use and long term effects on the brain, especially in the adolescent brain. Many states have now legalized Cannabis for recreational use and as a result the acceptance of marijuana is growing dramatically. Back in 2012, an Australian study found that prolonged use of cannabis or marijuana by young adults was linked to a higher risk of developing psychosis, with the highest risk affecting those who started using the substance in their teens, and continued using it for 6 years or more into adulthood. Dr John McGrath, of the Queensland Brain Institute, University of Queensland, Australia, and colleagues performed the study, published in the May issue of the JAMA/Archives journal Archives of General Psychiatry 2013.

WebMD defines psychosis as the following:

“When you lose touch with reality and see, hear, or believe things that aren’t real, doctors call that psychosis. You may have delusions. That means you hold on to untrue or strange beliefs. You might also have hallucinations. That’s when you imagine you hear or see something that doesn’t exist. Psychosis is a symptom, not an illness. A mental or physical illness, substance abuse, or extreme stress or trauma can cause it. Psychotic disorders, like schizophrenia, are mental illnesses that involve psychosis that usually happens for the first time in the late teen years or early adulthood. Young people are especially vulnerable for reasons doctors don’t fully understand. Even before the first episode psychosis (FEP), they may also show subtle signs of behavioral changes. This is called the prodromal period and could last days, weeks, months.or even years.” (https://www.webmd.com/schizophrenia/guide/what-is-psychosis#1)

These studies have shown heavy marijuana users have abnormal brain structure and poor memory. In addition to this, the Marijuana drug abuse appears to foster brain changes that resemble schizophrenia in MRI scans. (https://www.eurekalert.org/pub_releases/2013-12/nu-hmu121013.php) It is reported this was “the first study to target key brain regions in the deep sub-cortical gray matter of chronic marijuana users with structural MRI and to correlate abnormalities in these regions with an impaired working memory. Working memory is the ability to remember and process information in the moment and — if needed — transfer it to long-term memory. Previous studies have evaluated the effects of marijuana on the cortex, and few have directly compared chronic marijuana use in otherwise healthy individuals and individuals with schizophrenia.”

The most significant point of this research data is in the drugs ability to modify brain structure and create different neural pathways that affect memory and may lead to mental illness. The Spiritual insight that we learn from these things is not just about the ethics/morals of doing drugs. What we learn is the way in which our brains are very sensitive to external stimulus, the things that we expose ourselves to. Take for example, if we entertain sin in our minds and then practice sin, the effect will lead to the creation of different neural pathways that will put one into bondage in the sense of formation habitual patterns in our lives that are difficult to break. (See a previous article titled “How Genes and Memory Formation Effect the Battle between Sin and Righteousness”) The Bible portrays sin as a powerful, ever-vigilant enemy. According to the Torah, sin deceives (Bereshit / Genesis 3:13), desires (Bereshit / Genesis 4:7), and destroys (Bereshit / Genesis 6:7). Even when we go before the Lord to seek His forgiveness, perform Teshuvah (Repentance) and turn from sin, we are told that sin is powerfully active, waging war (Romans 7:23), lusting (Galatians 5:17), enticing (James 1:14), and entangling (Hebrews 12:1) us to keep us bound to it! All of these things occur in both a spiritual and physical sense.  In the physical sense, sin creates neural pathways that lead one to enjoy what they are doing at the moment, and the memory formation leads to its repetition.  The gospel however gives us hope that all sin, can be both forgiven and subdued.

Because of the connection of sin to memory formation, these things lead to habitual pathways in the brain.  One of the things we must consider is how to overcome habitual sin.  The Torah describes the the gospel message of God entering into our lives, delivering us from bondage, bringing us to a place of worship (before the mountain) making a covenant relationship with us, giving us His word, and dwelling in our midst.  These are the things that happen when a person gives his life over to the Lord, believes in Yeshua the Messiah for the forgiveness of sin, and is transformed from the inside out when God’s Spirit comes to dwell in his heart. The Torah describes man as having died in his sin in which Paul interprets as the natural man as “dead in sin and trespasses” (Ephesians 2:1). Because of man’s fall into sin, we are born with the propensity to choose disobedience and being unwilling to walk in God’s ways.  What naturally follows is habitual sin.  Paul describes this state of man as seeing the things of God as foolishness (1 Corinthians 2:14) where this type of man is hostile toward God (Romans 8:7). When a person gives his life over to God believing in Yeshua the Messiah, his life is transformed by the power of God.  The apostle Paul refers to this as the new creation (2 Corinthians 5:17). It is at this point in one’s life a person begins the process of sanctification in the sense that the Lord God dwelling in his midst is working in him to be transformed with the desire to live life for the glory of God. Paul wrote to the Romans saying “If the Spirit of him who raised Jesus from the dead dwells in you, he who raised Christ Jesus from the dead will also give life to your mortal bodies through his Spirit who dwells in you” (Romans 8:11). This is a very Torah centric principle!  Because of the Lord dwelling in our midst, one should have the desire to immerse himself into the truth of God’s Word, to studying the Bible, and setting the course of his life to its practical application.  It is God’s Word by which we are sanctified, set apart, for the glory of God (Romans 16:25). We are not saved by the grace of God without the fruit of the Spirit that is described in the Scriptures. (Galatians 3)  The idea of being sanctified, is connected to seeing God (see Parashat Yitro 2019).  This sanctification process is the result of God working in our lives to live according to His Word.  The promise we rest upon from the Torah, Paul wrote that He who began a good work in us will complete it on the last day (Philippians 1:6). We must be willing to lay our lives down, die daily to sin, and seek God’s Help to overcome the world for the Glory of His Name! We should keep these things in mind, just as what we read in the use of Marijuana and its mind altering effects.  Entertaining sin and putting sin into practice, has the same effect with terrible consequences.  There is hope however, the power of God and His Spirit is present to help if we are willing to accept it!