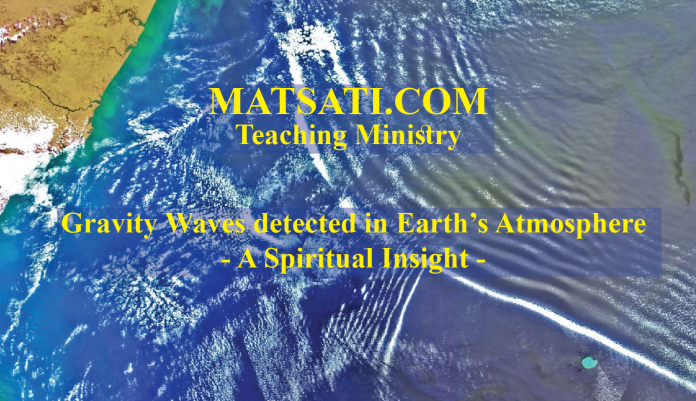 Gravity waves are defined as disturbances in the curvature of spacetime that are generated by accelerated masses that propagate as waves outward from their source at the speed of light. We have known about gravitational waves for more than 100 years, from since a scientist Albert Einstein first theorized the concept about gravity and space. Some sources for gravitational waves are when a star explodes (supernova), when two stars orbit one another, and when two black holes orbit one another or merge. In 2015, scientists first detected gravitational waves using the LIGO (LAser Interferometer Gravitational Wave Observatory). This was observed when two black holes crashed into one another, we had discussed this topic in a previous Science and Spirituality article.

Today’s article [1] describes how gravitational waves were detected by satellites orbiting the earth through an atmospheric disturbance, off the coast of Australia. The atmospheric disturbance show air and clouds rippling over the ocean. Rows of curved white lines are seen to emerge resembling ripples when a stone falls into water (disturbed water). The white cloud bands are reportedly the clouds forming the crests of atmospheric gravity waves. What is taking place is a simple case of fluid dynamics, were cold and warm air are mixing. The cold air is denser than the warmer air over Australia. The mixing of the less dense and more dense air leads to a loss in equilibrium in that atmospheric region. The atmosphere is agitated, and the ripples that are formed are related to gravity effect upon the mixing in the atmosphere. These atmospheric gravity waves take shape due to the push-pull effects of gravity on the buoyancy of the air with the different densities. When the air is perturbed, gravity pulls the air down and the air’s buoyancy pushes it back upwards. Moisture and water condensation creates the white vapor outlines along the crests of the oscillating air waves. The white vapor then functions as a means to visibly observe gravity atmospheric effects and Japan’s geostationary weather satellite Himawari-8 captured the images. The mathematics involving gravity waves describe gravity waves as traveling at the speed of light. In this instance, the waves that are being seen in the image are not traveling at the speed of light. The point is that these waves are being observed due to gravity effect on the fluid dynamic mixing in the atmosphere, so the idea of “gravity waves” being detected in the atmosphere is more correctly said to be gravity having an effect upon the atmospheric mixing and this is observable. We are observing the Earth’s gravity effect on the atmosphere and not literally observing “gravity waves” as it is defined on an astronomical event (definition given above) like we had discussed previously.

The Spiritual insights that we receive from this observation is about being able to see the influence of something that is invisible. When we consider the Scriptures, God cannot be seen by the human eye but yet His creative power is known and clearly seen by the things that He has made. A few Scriptures that describe this are given according to the following references:

Romans 1:20
For the invisible things of him from the creation of the world are clearly seen, being understood by the things that are made, even his eternal power and Godhead; so that they are without excuse.

Colossians 1:15
Who is the image of the invisible God, the firstborn of every creature.

1 Timothy 1:17
Now unto the King eternal, immortal, invisible, the only wise God, be honour and glory for ever and ever. Amen.

Hebrews 11:27
By faith he forsook Egypt, not fearing the wrath of the king: for he endured, as seeing him who is invisible.

1 John 4:12
No man hath seen God at any time. If we love one another, God dwelleth in us, and his love is perfected in us.

Based upon these Scriptures, Paul wrote that the invisible can be seen from the creation (Romans 1:20), and this is what we are observing in gravity effect upon the atmosphere; gravity something that is invisible and can be felt, is observable in the atmospheric events that are taking place. Just because gravity cannot be seen directly, it does not mean that gravity does not exist. The same can be said of God, who cannot be seen, this does not mean that He does not exist. The creation, illustrates the tremendous power of God. The Torah opens in the first sentence stating בְּרֵאשִׁית בָּרָא אֱלהִים “In the beginning Elohim (God) created.” The first thing that God did was to create, and we read in the Torah the Hebrew word “Elohim” (אֱלהִים) is written in the grammatical plural form (i.e., אֱלהִים, derived from the singular form אֵל, God). God is written in Hebrew in the plural form, not because there is more than one Creator, note the verb bara (בָּרָא) is written in the singular form, meaning “He created.” The Torah states that “God is one” (יְהוָה אֶחָד), using the word “one” (echad, אֶחָד, Devarim / Deuteronomy 6:4). The way the word Elohim is written describes something more than a numerical identity (i.e. the three persons descriptions in Christianity) but instead describes a unity in plurality, a “transcendency” in oneness that points to the mystery of the Name YHVH and is a kabbalistic concept describing the unity of the Godhead (אֵין סוֹף, i.e the sefirot) as Paul wrote in Romans 1:20. The plural name Elohim is a plurality of respect which denotes in one Person all the powers and influences by which the universe was first created and now is governed and sustained. Just as the prophet Isaiah wrote in Isaiah 45:18 “For thus saith the Lord that created the heavens; God himself that formed the earth and made it; he hath established it, he created it not in vain, he formed it to be inhabited: I am the Lord; and there is none else.‘” (KJV) David wrote in Tehillim / Psalms 19:1 The heavens declare the glory of God; and the sky above proclaims the work of his hands. (NASB, ב הַשָּׁמַיִם מְסַפְּרִים כְּבוֹד-אֵל וּמַעֲשֵֹה יָדָיו מַגִּיד הָרָקִיעַ:) The way the text is written is interesting, here david describes the creation as the glory of God saying, הַשָּׁמַיִם מְסַפְּרִים כְּבוֹד-אֵל “the heavens recounting (מְסַפְּרִים ) the glory of God.” The word mesaperim (מְסַפְּרִים) is derived from the root sefer, the same root for the word soferim. In the earliest Jewish traditions, there were scholars who were known as the soferim (the counters) who would count every letter and word in the Torah (and the Tanach) and they would ensure that the Torah scrolls were accurate down to the jot and tittle, all of the spellings, unusual wording constructions, everything was duplicated exactly according to their scribal techniques. By this we can be assured with confidence the highest accuracy the Scriptures we have today has been received directly from heaven, inspired by our Father in heaven.  This word mesaperim (מְסַפְּרִים) in the Psalms describes the detailing of the universe, all of creation, from the creation of stars, supernovas, collision of blackholes, all of these cosmic events recounts the glory of God. David also wrote that the heavenly expanse (מַגִּיד הָרָקִיעַ) is also the work of God’s hand. The word maggid (מַגִּיד) from Hebrew lexicon means an itinerant Jewish preacher, meaning that one is skilled as a narrator of Torah, a preacher of scholarly midrash on the meaning of the Scriptures. This description of the expanse being a seasoned scholar of Torah, as the work of God’s hand is significant, suggesting that the expanse of the universe plainly reveals the glory of God in a very Jewish fashion (Midrashically). The complexity of the physical universe, as we are trying to understand and describe by mathematical means, is the very work of God’s hands in His power and His glory. This is why Paul wrote in Romans 1 that we are without excuse, though man suppresses the truth about creation in support of evolution, Paul wrote that God’s power is on display in the sky far above us for all to see at any given time, just as he wrote, “18 For the wrath of God is revealed from heaven against all ungodliness and unrighteousness of men, who hold the truth in unrighteousness; 19 Because that which may be known of God is manifest in them; for God hath shewed it unto them. 20 For the invisible things of him from the creation of the world are clearly seen, being understood by the things that are made, even his eternal power and Godhead; so that they are without excuse.“ (Romans 1:18-20)

Bits of Torah Truths, Parashat Mishpatim, The Mitzvah on Selling Yourself...