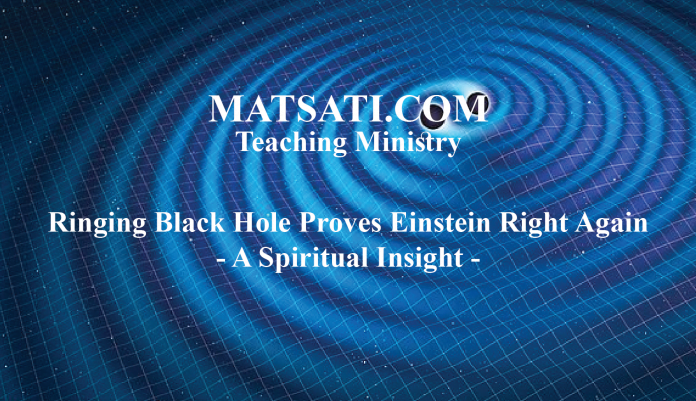 In a recent publication in the Journal Physical Review Letters [1] scientists tested the “No-Hair Theorem” using the astronomical data from GW150914. The GW150914 is the first LIGO detection of a binary black hole merger. (LIGO = Laser Interferometer Gravitational-Wave Observatory, https://www.ligo.caltech.edu/page/detection-companion-papers) In this work, researchers were looking for a data set to study a ringdown model including overtones which allow one to measure the final mass and spin magnitude of the remnant black hole following the merger of two black holes. The dataset on GW150914 supported the hypothesis that the merger of two black holes produced a “Kerr” black hole that was predicted by Einstein’s theory of general relativity provides a test for the no-hair theorem at a 10% level. A Kerr black hole is a type of black hole that possesses only mass and angular momentum (but not electrical charge – the third possible property of a black hole). In other words, a Kerr black hole is an uncharged black hole that rotates about a central axis. The no-hair theorem states that all black hole solutions of the Einstein–Maxwell equations of gravitation and electromagnetism in general relativity can be completely characterized by only three externally observable classical parameters: mass, electric charge, and angular momentum.

The idea behind Einstein’s theory of general relativity on black holes was after two black holes collide and merge, the newly created black hole should ring like a bell sending out gravitational waves that are rippling through space-time. The pitch and decay of the waves should provide us the object’s mass and spin. Astronomers have managed to observe this exact phenomenon proving for the first time Einstein’s theory of general relativity is correct. Gravitational waves have been detected using a laser interferometer (analogous to FTIR spectroscopy) and researchers from MIT, Caltech, Stony Brook University and Cornell University set out to study this phenomenon using the sensor technology that we have today. The research team focused on the GW150914 dataset obtained back on September 2015 to study the ringing pattern of the black hole and then used Einstein’s proposed method to calculate the mass and spin of the final black hole. The idea was if the model predictions were different from the experimental data, this would suggest there are exotic physics at work beyond general relativity. The data however lined up directly with the spin and mass calculations. This fascinating work for the first time confirmed Einstein in this way and provides a lot of excitement in the astronomy research community. This work that was performed does not stop future analysis, but causes future work to look for data that produces an unexpected result which could indicate and even stranger object than a black hole. This causes researchers to continue to work on detectors on both earth and in space that will enable even more precise measurements to see if there are more exotic objects in space like wormholes, boson stars, etc that do not ring in the same way as we see in the GW150914 dataset.

The scientific research on merging black holes and the unique properties (mass, spin, charge) reminds us of the unique properties of God, and of what the Lord God Almighty gives to us for those who believe in Yeshua the Messiah and receive God’s Holy Spirit. The Zohar describes the importance of righteousness, and in the world to come, the headship of the Messiah standing over and above the righteous. The references to Yesod (foundation) being created in the likeness of that which is above, this draws in a context of something God had planned from the beginning. Take note of the parallel in how Paul wrote to the Romans saying in Romans 8:29 or those whom He foreknew, He also predestined to become conformed to the image of His Son, so that He would be the firstborn among many brethren; (NASB) We who are called to faith in the God of Abraham, and in His Messiah Yeshua, the Lord God is conforming us unto the image of His Son, meaning that He is making us into the likeness of that which is above. There are many parallels here in the significance and preeminence of the Messiah in the lives of God’s people. In the Scientific research, there is a natural process of physics and chemistry that lead to the outward effects of two black holes merging that can be measured. There is by no means any natural process that occurs when a man draws near to God to have faith, to be faithful, and to apply His word to life. This process is purely a supernatural phenomenon, the power of God working through the one who has faith in Yeshua, and the giving of God’s Spirit into our lives. This is why the NT teaches us that Yeshua alone is the Savior of the world (מוֹשִׁיעַ הָעוֹלָם), that salvation, life, and the ultimate healing of the world would come solely through Him. These things are not a mystical approach that focuses on the idea of secret knowledge (gnosis) or a special experience as the way to know God. These conclusions are actually rooted in the study of the Jewish Scriptures in both the Tanach and the Apostolic Writings. The Scriptures speak of the idea of creation, sin, the redemption of fallen humanity, and the restoration of all things back into unity with God through a covenant relationship, and God giving His instructions, literally writing them upon our hearts coupled with His presence in our lives to help us each day.There is nothing more excellent than this truth, God’s people being the keeper and preserver of this truth, and the salvation of God being taught to all the world. The unique properties that God gives us (mercy, humility, love, grace, and servanthood) is through His Spirit, His indwelling, His presence, His working in our lives such that we have a desire for a relationship with Him, to turn from sin, to repent, and to seek Yeshua and His righteousness. These concepts of the Lord working powerfully in our lives is found in the phrase “Though we are weak, He makes us strong.” (2 Corinthians 12:9-11) All of these things, the scientific research, the mystical teachings of Judaism (Zohar), the afterlife, remind us of the need to have a relationship with God, and the uniqueness of what that involves, the Lord working through us each day. Another thing to think about, the gravitational waves mentioned in the astronomical data (laser interferometer data) is very weak. It requires very sensitive instrumentation, which is why it has taken so many years for men to develop this sensor technology to study these things. This speaks to the weakness that is in each of us, though we are transformed into something new, into something that is powered by the Spirit of God Himself, we in our weakness, God through the Messiah lives powerfully in us! It is when we are weak in ourselves, then we are strong in the mercy of our Lord Yeshua the Messiah; when we feel that we are weak in ourselves, then we go to the Lord to receive strength from Him, and enjoy what He supplies the most of, His Divine strength and grace.