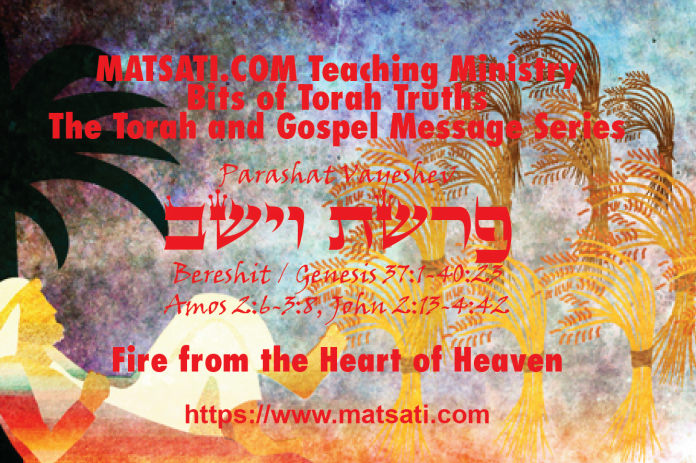 The Torah describes God’s working in the lives of men, women, and children, and of His communicating His love to His people. In Parashat Vayetze, we read about Jacob’s ladder and the communication pathway being described as a ladder that descended to the earth from the heart of heaven. A similar description is given of the burning bush, when Moshe met with God on the mountain of the Lord, Daat Zkenim on Bereshit / Genesis 28:12 Part 2 describes Jacob’s ladder and parallels this to Moshe at the burning bush saying the following:

Daat Zkenim on Genesis 28:12 Part 2
והנה סולם מוצב ארצה, “and (in his dream) he saw a ladder planted on the earth;” at the burning bush, where Moses had his first communication from G–d, the fire from that bush rose to the heart of the heavens. At that time Moses was told specifically that the Israelites, Yaakov’s descendants shall worship G–d there.

Daat Zkenim states that the ladder ascended from the earth to the heart of heaven as a communication line to God. He also describes the burning bush as the fire having also ascended to the heart of heaven with Moshe having communicated with God through the fire. In Parashat Vaetchanan, we also see Moshe’s description of the mountain of Sinai, he described how the mountain “burned with fire unto the heart of heaven” (בּעֵר בָּאֵשׁ עַד־לֵב הַשָּׁמַיִם) when the Ten Commandments were inscribed upon the two tablets of testimony (Devarim / Deuteronomy 4:11-13). The sages claim the tablets represent a heart as Solomon wrote in Mishley / Proverbs 3:3 “write them on the tablet of your heart.” In addition, the Word of God is also paralleled to a fire reveals the will of God for us (See Devarim / Deuteronomy 4:24, Jeremiah 23:29). We also know how Yeshua applied the ladder to himself in John 1:51. John the Baptist stated in Matthew 3:11 As for me, I baptize you with water for repentance, but He who is coming after me is mightier than I, and I am not fit to remove His sandals; He will baptize you with the Holy Spirit and fire. (NASB) This connects us back to the opening words to John 1 which speak of Yeshua as the living word of God made flesh (see John 1:1-14). In the Torah, Moshe smashed the tablets after having seen the people’s great rebellion before God. The people had lost sight of heaven, and so, considering these things, the tablets and the fire of God, the Lord requires a broken heart (Teshuvah, Repentance) in order to behold His glory. In parallel fashion, Yeshua died of a broken heart upon the cross, as the fire that burned within him, that went up to the heart of heaven, was put out by the sinfulness of the religious leaders. It is in this sacrifice that we see the great glory of God, and the greatness of His love for His people!

We are told in the Apostolic Writings Yeshua is our communication path to heaven. Yeshua stated the ladder in Jacob’s dream (Bereshit / Genesis 28) is him (angels ascending and descending upon him) the idea of Yeshua being our communication path, to pray in His name, is a Torah based principle. We are told to pray in the name of Yeshua asking our Father in heaven for help. We are told how the Word of God became flesh (John 1:14) and Yeshua then states that “Everyone who hears these words of mine and does them will be like a wiseman who built his house on a rock.” (Matthew 7:24) Though the house will be tested with storms and floods, the one that is built upon the rock will stand. The parallel is to Yeshua being the rosh pina, the head of the corner, the foundation stone upon which we stand. In similar fashion, Paul wrote that we are to construct our lives on a solid foundation of the work of the Messiah (1 Corinthians 3:11-15, 3:11 For no man can lay a foundation other than the one which is laid, which is Jesus Christ. 3:12 Now if any man builds on the foundation with gold, silver, precious stones, wood, hay, straw, 3:13 each man’s work will become evident; for the day will show it because it is to be revealed with fire, and the fire itself will test the quality of each man’s work. 3:14 If any man’s work which he has built on it remains, he will receive a reward. 3:15 If any man’s work is burned up, he will suffer loss; but he himself will be saved, yet so as through fire. NASB). The foundation upon which Yeshua lay was truth, mercy, peace, justice, righteousness, and holiness according to God’s word. Paul writes to take care that the materials one uses for their house not be of wood, hay, and straw, which represents religious works or self-effort. The foundation of gold, silver, and precious stones is in reference to the work of the Messiah in our lives, and the work of the Spirit in our hearts. Based upon Paul’s interpretation, every man’s works (ἔργον) will be tested (δοκιμάσει) and disclosed on that great day, and it will be revealed by fire, to reveal what sort of work one has done. (1 Corinthians 3:13) The judgment in this case is related to fire testing the quality of materials. Those deeds that are the result of the fruit of the spirit, of God working by His Spirit in our lives, our submitting to these things with the correct intention, these will survive through the fire. The worthless deeds (φαῦλος) however will be burned up. Notice how the testing by fire is not the same as the eternal fire that is reserved for the wicked. These fires Paul is speaking of is in reference to the way in which the Lord will reveal what is eternally abiding, what will remain. Also, something to take note of, this fire is not a purgatory experience. Yeshua taught that each of us will give an account in Matthew 25:14-30 in the parable of the “talents” where the different servants were distributed money as their employer left for a journey that would take him a long time. When the employer returned, he asked his servants to give an account for the use of the money that he had given them. The employer was looking for the profit-and-loss to what he had given them. The employer took account and the servants summarized their earnings. In a similar fashion, we too will have to give an account for our lives. Those who use what God has given them for the promotion of the Kingdom of Heaven will be rewarded, and those who waste what they have been given will not. (see 1 Corinthians 3:12-15) These are related to the things that are done in the body. In the Mishnah Pirkei Avot 2:11, the rabbis conclude how hatred awakens many sins. In the Talmud Bavli Yoma 9a-b the rabbis say that the Temple was destroyed due to gratuitous hatred. The Tosefta also attributes the destruction to other, less well-known sins. The Talmud Bavli Bava Mezia 30b states, “Rav Yochanan said: Jerusalem was destroyed only because the judges ruled in accordance with the strict letter of the law, as opposed to ruling beyond the letter of the law.” The description of hatred and its connection to many forms of evil describe hatred like no other sin because it is rooted in vanity, delusion, and lack of love and empathy. This may be the reasons why Yeshua focused so much on love, and commanded His followers to love one another no matter what and why John wrote in 1 John 3:15 Everyone who hates his brother is a murderer; and you know that no murderer has eternal life abiding in him. (NASB) Love unlocks the power of God in our lives! Hate on the other hand does the exact opposite driving the presence of God away from us. Hate is what drove Joseph’s brothers to sell him into slavery. In not so uncertain terms, they were giving him a death sentence at the hands of others. This is why they believed he was dead, selling Joseph into Egyptian slavery. Keeping hatred in our hearts is like selling our soul to hatred. When one does such a thing, one becomes of little use to God. But if we seek to turn from hatred, asking the Lord God Almighty to forgive us in Yeshua the Messiah, He is powerful to do so, and to deliver us from this sin of all sins known as hatred, and bring us into His love and Mercy so that we too can give love and mercy to others. This is what the Torah teaches us, and this is why Yeshua taught us about the importance of love and its connection to eternal life. This is how the Torah and the Gospel Message go work together!

Bits of Torah Truths, Parashat Re’eh, If you abide in Me,...