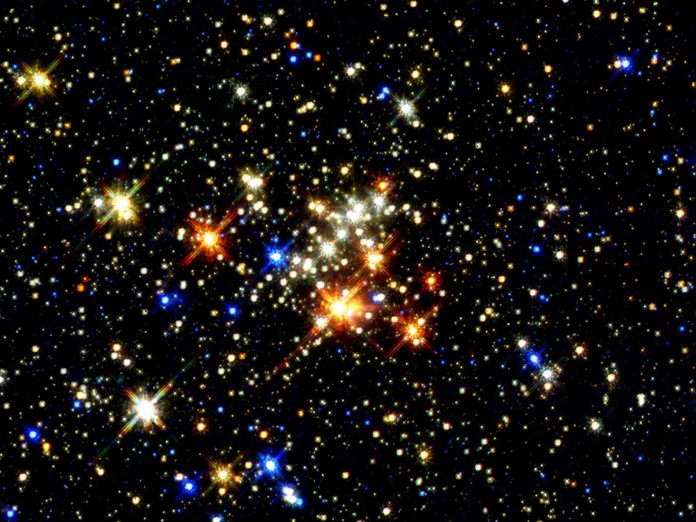 From the ESA/Herschel/SPIRE space science archive there is an extensive set of imaging data of the visible known universe as observed from the earth.  This article shows a zoomed-in view of about 8 percent of the entire photo width. Images like these demonstrate how incredibly small we are in the universe and allow astronomers to estimate, via extrapolation, the total number of galaxies across the entire observable Universe. A couple of years ago, astronomers came to the startling realization that the Universe contains up to 10 to 20 times more galaxies than previously thought. The current best guess is that the universe contains somewhere between one and two trillion galaxies. This means the universe is absolutely packed with stars, somewhere on the order of 700 sextillion stars — that’s seven followed by 23 zeros. This goes as a fantastic testimony of God in His creative power.  And this is just within the observable Universe. Anything beyond the cosmological horizon, the most distant light that reaches Earth, is still unknown to us, so it’s impossible to know the true figure. This demonstrates the absolute power of God in this creative ability.  The images of just the number of galaxies is mind-bogglingly!  We read in the Torah in the creation account in Bereshit / Genesis 1, it says

1:1 In the beginning God created the heavens and the earth. 1:2 The earth was formless and void, and darkness was over the surface of the deep, and the Spirit of God was moving over the surface of the waters. 1:3 Then God said, ‘Let there be light’; and there was light. 1:4 God saw that the light was good; and God separated the light from the darkness. 1:5 God called the light day, and the darkness He called night. And there was evening and there was morning, one day. (NASB)

The first of God’s creative tasks was to create light.  This occurred before the creation of the sun, moon, and stars.  What this reveals to us is the first thing the Lord God Almighty did was to create righteousness (light) a direct manifestation of His glory and Righteousness.  The creation of righteousness teaches us something of God’s character and ultimately of His plan.  God’s purpose in giving the Torah was so that, in the end, mercy would reign.  The creation of light teaches us that God has planned these things before the creation of the world.  The infinite reality of Gods glory is illustrated for us in the creation and the vastness of the universe, and presents us with two infinite realities that are needed to explain to us the sense and magnitude of God’s way of salvation.  God’s mercy, forgiveness, and salvation is designed to draw us to Himself.   God’s aim in the work of redemption is the triumph of mercy (חסד) over sin and death unto eternal life through His Messiah Yeshua. The “eternal” refers to life that never ends, the infinite life that has no end which is illustrated by the fantastic testimony we are given according to His Word!

Watch Dr Duane D Miller Discuss – To the One Who...