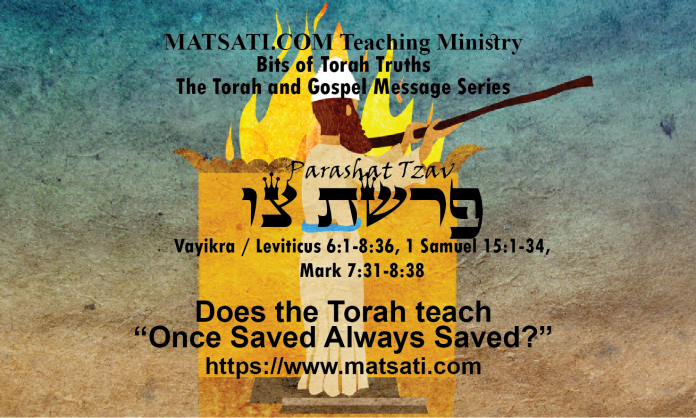 In the chapters from Parashat Tzav we read how the Lord God instructs Moshe to instruct Aaron and his sons on the sacrifices. We read in Vayikra / Leviticus 7:1, א וְזֹאת תּוֹרַת הָאָשָׁם קֹדֶשׁ קָדָשִׁים הוּא: 7:1 And this is the instruction of the guilt offering it is a holy of holies. (NASB) When studying these things, “What makes an offering to God holy?” Is it the altar? Is it the manner in which it was brought? Is it the priest? Or is it following the detailed instructions that are laid out in the Torah? What makes something as holy unto the Lord is the setting of something apart for the Lord and doing so according to His instructions. The halakhot of offerings comprise a significant portion of the Torah, and likewise Kodashim, an entire order of the six orders of the Mishna and Talmud, are devoted to those matters. The significance of the sacrificial service in the Temple is so great that the Sages have said that it is one of the pillars upon which the world stands (Pirkei Avot 1:2). Although the offerings ceased with the destruction of the Temple, they are still significant and central in Judaism. The offerings are special mitzvot that facilitate drawing nearer to God. All the types of offerings, despite the many differences between them, manifest the close relationship between man and his Creator. The Talmud describes the bringing of the offerings in the following way:

MISHNA: All slaughtered offerings that were slaughtered not for their own sake, i.e., during the slaughtering the slaughterer’s intent was to sacrifice a different offering, are fit, and one may continue their sacrificial rites and partake of their meat where that applies. But these offerings did not satisfy the obligation of the owner, who is therefore required to bring another offering. This is the halakha with regard to all offerings except for the Paschal offering and the sin offering. In those cases, if the owner sacrificed them not for their own sake, they are unfit. But there is a difference between the two exceptions. The Paschal offering is unfit only when sacrificed not for its sake at its appointed time, on the fourteenth day of Nisan after noon, while the sin offering is unfit any time that it is sacrificed not for its sake.

The idea here is when one brings an offering, it is to be for a particular purpose. In Parashat Tzav, the sin offering and the guilt offering are juxtaposed together, and the text states “As is the sin offering, so is the guilt offering” (Vayikra / Leviticus 7:7), this places emphasis upon one placing his hand upon the head of the offering, of both the sin and guilt offerings, and confessing his sins to God and to the Priest in order to receive atonement. Sforno on Vayikra / Leviticus 7:7 Part 1 states “there is a common denominator between the chatat and the asham sacrifice. While the former atones for inadvertently committed sins for which the karet (cutting off) penalty would be in place if the sin had been committed deliberately, the asham, although not atoning for this kind of sin, does have a similar place in the pyramid of offerings, seeing the sin it atones for involves careless behavior vis a vis matters that are holy, something that one needs to be more than usually careful about. Symbolically speaking, i.e. as to their “Torah,” (instruction) they have much in common, תורה אחת.” Again we see the Torah emphasizing the importance of intention in regards to sin and guilt before God. The Mishnah follows this interpretation on the offering being unfit if not offered in an appropriate manner. This is why an offering must be presented by one’s own hand. This is about drawing near to God and details the close relationship that man has with his Creator!

The Scriptures we are looking at for this week are from Vayikra / Leviticus 7:1-27:

This week’s Torah portion speaks about the peace offerings and how all of it is to be eating by the third day, any remaining is to be burned up in the fire. We also read about the state of a person if he is ṭâmêʼ (טָמֵא, unclean) he may not eat of the sacrifice.

I believe that when the Torah wrote וְטֻמְאָת֖וֹ עָלָ֑יו in verse 20, the Lord God Almighty is also teaching us something different altogether. וְהַנֶּ֜פֶשׁ אֲשֶׁר־תֹּאכַ֣ל בָּשָׂ֗ר מִזֶּ֤בַח הַשְּׁלָמִים֙ אֲשֶׁ֣ר לַיהוָ֔ה וְטֻמְאָת֖וֹ עָלָ֑יו וְנִכְרְתָ֛ה הַנֶּ֥פֶשׁ הַהִ֖וא מֵעַמֶּֽיהָ׃ 7:20 But the person who, in a state of uncleanness, eats flesh from the LORD’s sacrifices of peace offering, that person shall be cut off from his kin. The impurity spoken of here is either an intrinsic impurity (i.e. someone who suffers from a constant flow, tzaraat skin disease, or nocternal emission) or an extrinsic impurity (i.e. acquired from touching a corpse, or touching someone who suffers from a constant flow [i,e, niddah/menstral], or from someone who has tzaraat, an animal that is unfit for food, or from flying or crawling creatures that are unfit for food). Ibn Ezra says that the reference to his uncleanness being upon him (וְטֻמְאָת֖וֹ עָלָ֑יו, in a state of uncleanness) this was a reference to one having already undergone the purification process of seven days as in the example of having touched someone who was dead but has not yet gone through the sunset of the seventh day. He discusses how there is an impurity (i.e. touching the dead, unclean animal, etc) as in the list of intrinsic and extrinsic impurity, as not having a serious effect upon the soul of the person concerned. Ibn Ezra states this is more like a veil of impurity that only envelops the outside of the body of a person. He says this is why the reason of ritual immersion is sufficient to remove the vestiges of the impurity. He then makes the statement that the immersion (mikvah) would become ineffective if the impurity had penetrated the inside of the body. This is illustrated in the Torah וְהַנֶּ֜פֶשׁ אֲשֶׁר־תֹּאכַ֣ל … וְטֻמְאָת֖וֹ עָלָ֑יו “and the soul that eats … and his impurity is upon him” informs us that joining what is holy (the sacrifice) with what is impure is under the penalty of karet (the cutting off, death). The significance of this is brought out for us when Yeshua taught us how impurity comes from within Mark 7:14-23 after exposing the hypocrisy of the scribe and Pharisees. He said in Mark 7:21 For from within the hearts of men come evil thoughts, sexual immorality, theft, murder, adultery, 7:22 greed, wickedness, deceit, debauchery, envy, slander, arrogance, and foolishness. 7:23 All these evils come from within, and these are what defile a man.” (NASB) Studying the Tanach (תנך, Torah, Neviim, Ketuvim) and the Apostolic Writings, we learn the major premise of the Torah and the Apostolic Writings for all men is (i) to Love God, (ii) to Love our neighbor, and (iii) to live Moral and (iv) Ethical lives before God. All of the Torah can be distilled down to these four things. This may also be reduced further to only points (i) and (ii), loving God and loving your neighbor since loving God we will want to obey His commands living moral and ethical lives.

Microbiologists Discover Bacteria That Feed on Metal – A Spiritual Insight

Inheritance is Related to what is Forgivable, פרשת פינחס, Parashat Pinchas,...