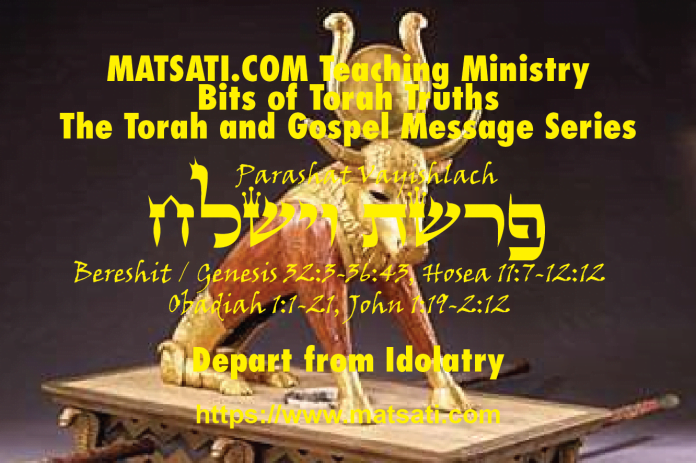 The most frequent sin mentioned in the bible is idolatry and the adoption of foreign gods into one’s life. The forbidden nature of worshiping foreign gods is at the core of the Torah teaching us to serve and worship the God of Israel alone. In this week’s Torah portion, we read the Lord God telling Jacob to pick up camp and move to Bethel, to live there and to make an altar and worship. Bereshit / Genesis 35:1 Then God said to Jacob, ‘Arise, go up to Bethel and live there, and make an altar there to God, who appeared to you when you fled from your brother Esau.’ 35:2 So Jacob said to his household and to all who were with him, ‘Put away the foreign gods which are among you, and purify yourselves and change your garments; (NASB, א וַיֹּאמֶר אֱלֹהִים אֶל-יַעֲקֹב קוּם עֲלֵה בֵית-אֵל וְשֶׁב-שָׁם וַעֲשֵֹה-שָׁם מִזְבֵּחַ לָאֵל הַנִּרְאֶה אֵלֶיךָ בְּבָרְחֲךָ מִפְּנֵי עֵשָֹו אָחִיךָ: ב וַיֹּאמֶר יַעֲקֹב אֶל-בֵּיתוֹ וְאֶל כָּל-אֲשֶׁר עִמּוֹ הָסִרוּ אֶת-אֱלֹהֵי הַנֵּכָר אֲשֶׁר בְּתֹכֲכֶם וְהִטַּהֲרוּ וְהַחֲלִיפוּ שִֹמְלֹתֵיכֶם:) It is interesting how Jacob tells his household to remove all of the foreign gods from among them and to purify themselves based upon what the Lord God is calling them to do (to move to a place called the house of God). As we study the history of Israel, we learn how the prophets fought against the worship of Baal and other foreign gods. It is interesting while reading the Bible, nowhere is it written of the nations being condemned for worshiping their gods. What is mentioned is the “Abominations” that are a part of their worship. The Noahide Laws, which are a Jewish Talmudic designation for seven biblical laws that were given to Adam and Noah prior to the giving of the Torah at the mountain of Sinai through Moshe. Beginning with the Bereshit / Genesis 2:16, the Talmud Bavli lists six commandments (negative commands against idolatry, blasphemy, murder, adultery, robbery, and a positive command for Justice). The seventh command was given to Noah after the flood which forbade the eating of flesh that is cut from an animal raw. (Bereshit / Genesis 9:4). It is believed the Noahide Laws were given to the nations, which protected monotheism and ethical behavior. Maimonides regarded anyone who observed these Laws was “assured a portion in the olam haba (the world to come).” Thus, the idea of idolatry was forbidden to all of mankind, for the Gentiles just as it was for the Jewish people. The Talmud Bavli, Tractate Avodah Zarah, is devoted to the laws against idolatry and idolatrous practices. The rabbis view on idolatry may be understood from the Mishnah Tractate Avodah Zarah.

“For three days before pagan festivals it was forbidden to have any business dealings with pagans (1:1). It was forbidden to sell articles to pagans before their festivals which they might use in idolatrous worship, for example, fir cones, white figs, frankincense, or a white chicken (1:5). It was strictly forbidden to cast a stone at a Merkolis (4:1), which appears to have been a pillar to Mercury, the Roman equivalent of Greek Hermes, who was the patron deity of travelers and at whose shrine the grateful passers by cast a stone.”

The important point about these Scriptures for this week is that God is calling Jacob and his people to go and live at Bethel (the house of God) and doing so requires their forsaking their foreign gods. The commentary Chizkuni on Bereshit / Genesis 35:2 Part 1 states, “הָסִרוּ אֶת-אֱלֹהֵי הַנֵּכָר, “remove the alien deities!” This was required in order to avoid giving the impression that prayers or sacrifices were intended for them.” This commentary speaks of removing an idol for the purpose of eliminating the impression that one prays to or offers sacrifices to this idol. Could this also be applied to the idols that one sets up in one’s heart? This question arises from the idea of prayers and sacrifices are not necessarily given to the idol one sets up in his heart, as opposed to those made of wood and stone. Note however the sacrifice of praise might be something that is given to an idol that is set up in one’s heart. The Jewish commentaries state that these foreign gods were acquired from the looting of the people of Shechem.

In modern times, the sin of idolatry (with wood and stone statutes) on a mass scale does not occur. Few people are tempted to worship idols in the sense as they were worshiped in ancient days. Today, Jewish thinkers have called attention to different forms of idolatry such as, the worship of the State, socialism, as in totalitarian regimes, or the worship of movements, persons, and various ideologies. In the Jewish tradition, the Torah is understood as a means to drawing near to God and never as an object of worship. We don’t worship the Torah scroll. Some authorities go so far as to forbid Jews to bow to the Torah since this might seem to treat the Torah scroll as an object of worship. The custom is to bow to the Torah scroll but only as one bows as a token of respect, to a human being. The Hasidic teacher Shneur Zalman of Liady [1745-1813] saw idolatry not as a denial of God but as an attempt at insubordination. He taught that the man who sins in idolatry desires to have a little corner of life apart from God’s all-embracing power, and the idols he sets up are his means of effecting the separation between God and that part of life man wishes to call completely his own. It is for this reason the Rabbis consider pride to be equivalent to idolatry because both commit the same offence of insubordination. The idea is idolatry causes man to believe something exists outside and separate from God and His holiness. Pride functions in a similar fashion. This is paralleled to what the Lord told Ezekiel in regard to the idol that one sets up in his heart is related to sin (iniquity). This is consistent with David’s words in his psalm saying in Tehillim / Psalms 66:18 If I regard wickedness in my heart, The Lord will not hear; (NASB, אָוֶן אִם-רָאִיתִי בְלִבִּי לֹא יִשְׁמַע) David says the Lord will not hear us due to sin and Ezekiel speaks of the Lord answering such a person only in the sense that is related to the multitude of their idols (sins) that have been set up in the heart. Repentance is a prerequisite to having prayer answered. The concept here is “how can the Lord hear our prayers if we keep iniquity in our hearts?” This seems to be what was happening in the case of Ezekiel. When we willfully cling to sin, is it possible we are desiring the Lord to secretly allow something considered immoral, illegal, wrong, or harmful to continue in our lives while having the benefits of answer prayer and a relationship with God? Based upon these Scriptures, the thing that hinders our prayers is iniquity that is held onto in our hearts. Can we set up idols or sin in our hearts and expect the Lord God to listen to us in prayer? Consider this also, if a person refuses to listen / hear / obey God’s commands, will the Lord God hear our prayers. Another way of phrasing t his is: “Can the Lord God accept our devotions while we delight in sin?” All of these questions are very important to consider and are directly related to what the Lord God is instructing Jacob before moving to Bethel.

What we find in this week’s Torah portion is the call of God on His people to go to the house of God (Bethel). Bereshit / Genesis 35:1 Then God said to Jacob, ‘Arise, go up to Bethel and live there, and make an altar there to God, who appeared to you when you fled from your brother Esau.’ 35:2 So Jacob said to his household and to all who were with him, ‘Put away the foreign gods which are among you, and purify yourselves and change your garments; (NASB, א וַיֹּאמֶר אֱלֹהִים אֶל-יַעֲקֹב קוּם עֲלֵה בֵית-אֵל וְשֶׁב-שָׁם וַעֲשֵֹה-שָׁם מִזְבֵּחַ לָאֵל הַנִּרְאֶה אֵלֶיךָ בְּבָרְחֲךָ מִפְּנֵי עֵשָֹו אָחִיךָ: ב וַיֹּאמֶר יַעֲקֹב אֶל-בֵּיתוֹ וְאֶל כָּל-אֲשֶׁר עִמּוֹ הָסִרוּ אֶת-אֱלֹהֵי הַנֵּכָר אֲשֶׁר בְּתֹכֲכֶם וְהִטַּהֲרוּ וְהַחֲלִיפוּ שִֹמְלֹתֵיכֶם:) Jacob understands this command as including the need to remove the foreign gods, the idols one has set up, to reform one’s ways, and to walk in God’s ways. This is coupled to the idea of arriving at Bethel and making an altar to God in the sense that we are to worship Him only in the manner in which He prescribed. These things teach us how important it is to keep God’s word at the center of our lives. If one does not properly understand the role or place of the Torah in the Gospel Message, one may not obey the Lord’s will and therefore will cancel the law. Hence, a person may abolish Torah by misconstruing the divine revelation. This is what appears to be happening in the doctrines and theologies of this present day. And historically we are able to observe, the theological polemics within Christianity during its struggle for self-definition causing the church to sever itself almost completely from Judaism. What we are learning however is the Torah and the Gospel Message go hand-in-hand with one another. It is by the power of God and His Spirit which dwells within that enables us to walk according to the Spirit and live our lives according to God’s Word. Note how walking according to the Spirit is synonymous to living without sin. Remember, living the Torah of God is a by-product of having a relationship with our Father in heaven in Yeshua God’s Messiah!