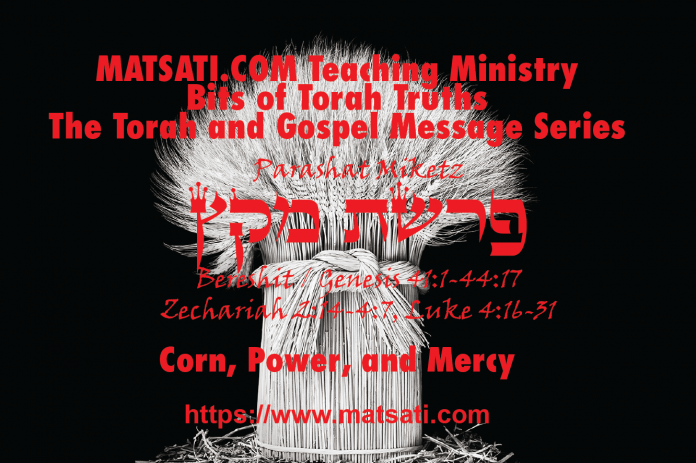 In the story of Jacob, we learn about his life, he fled from Esau and married two women (Rachael and Leah). The Torah states that Jacob loved Rachael, and he did not love Leah like he did Rachael. The Lord God opened Leah’s womb so she could have children, and closed Rachael’s womb so she could not. The Lord God was trying to teach Jacob something about the importance of love in how he loved his wives, and the children that he had been given from God. As Jacob grew older, it appears his love was drawn to the children of Rachael. In Parashat Vayeshev, we learned how Joseph was the favored son meaning that Jacob loved him the most. His brothers were jealous and for 20 pieces of silver sold him into slavery. Joseph was then falsely accused and put into prison. He spent a long amount of time in prison, and he was put in charge to help manage the prison because God was with him. One day, two new prisoners arrived, they had dreams, and Joseph interpreted their dreams. He successfully interpreted their dreams and was hoping the wine-steward would mention him to Pharaoh so hat he would be released. Parashat Miketz opens stating that two years had passed, and he was still in jail. It was at this time Pharaoh had a dream concerning standing beside the Nile river and he saw seven cows and seven ears of corn. There were seven other cows that came along, they were skinny and sickly looking, they ate up the healthy cows. Similar with the ears of corn, seven other skinny and sickly-looking corn stalks ate up the seven healthy ones. This disturbed Pharaoh and so he looked for a man who was able to interpret dreams. Joseph interpreted his dreams, and said that Egypt would experience seven prosperous years, followed by seven years of famine. Pharaoh saw Joseph’s abilities in whom the Spirit of God dwelled and appointed him as leader over Egypt to oversee a project of collecting grain to save everyone’s life. Pharaoh gave Joseph an Egyptian name (Tsofnat Paneach – “Decipherer of Secrets”) and the daughter of an Egyptian priest of On named Asenath as his wife who later bore him two sons, Manasseh (“Forgetting”) and Ephraim (“Fruitfulness”). Overnight Joseph was taken from the dungeon and exalted to the right hand of Pharaoh himself! He was 30 years old at the time of his rise to power. Joseph brought in massive amounts of food in storehouses around Egypt. The narrative explains that the dreams of Pharaoh came true, there were seven years of abundance, and then there was seven years of famine. Due to the famine, Jacob sent all of his sons down to Egypt to buy food. All of Jacob’s sons except Benjamin went down. Joseph immediately recognized them, but they did not recognize him. Joseph proceeded to test them to see if they have changed. He called them spies, and they denied the charge, they were merely there to buy food.

The brothers did not understand how Joseph could have risen to such a high position of power having been sold into slavery. They presumed he was dead. The sages discuss the possibility of his beard causing his brothers to not recognize Joseph. This draws in the idea of physical appearances, the Scriptures say, the Lord said to Samuel, “Do not look on his appearance or on the height of his stature, because I have rejected him. For the Lord sees not as man sees” (1 Samuel 16:7). Elsewhere in the Scriptures, the Lord God explains to Samuel that He does not judge a man by his outward appearances. There is an important lesson to be learned when applied to Yeshua the Messiah and his appearance. The prophet Isaiah said in Isaiah 53:2 “He had no beauty or majesty to attract us to Him, nothing in His appearance that we should desire Him.” This tells us that Yeshua, his appearance, was just like any other man’s meaning that he was ordinary-looking. Isaiah prophesies that the suffering servant will rise from lowly conditions and wear none of the usual emblems of royalty, making his true identity visible only to the discerning eye of faith. This is foundational as we understand God’s reign in our lives. The kingdom of God is His redemptive power in our lives. His rule and reign include the authority of Torah. The Apostolic Writings teach about the nature of God and are firmly rooted in the Hebrew Scriptures and parallel rabbinic thought. The Jewish background of early Christianity provides an enriched perception of the significance of these things, and the oneness of God in faith and practice.

In the story of Joseph and his brothers, they return from Canaan with their brother Benjamin. When they arrived in Egypt, the brothers were escorted to Joseph’s house, they presented a gift from their father and bowed down before him. Joseph then hosted a feast and had the brothers sit in the order of their birth. The Torah tells us that Joseph served Benjamin 5 times the amount of food as compared to the other brothers. The next morning the brothers were getting ready to return to Canaan, and Joseph devised a final test ordering his servants to place their money back in their sacks and also to include Joseph’s silver goblet (his divination goblet) into Benjamin’s sack. After leaving to return home, they were soon overtaken and confronted by Joseph’s steward, who accused them of stealing Joseph’s goblet. They again protested claiming their innocence and agreed to be searched. The silver goblet was found in Benjamin’s sack. The brothers rent their clothes in grief and returned to make an appeal to Joseph, where they fell to the ground before him and confessed their guilt before God showing true repentance (teshuvah). The parashah ends as Judah offered himself and his brothers to be slaves in place of Benjamin, but Joseph refused and insisted that only Benjamin would be made a slave for his “crime.” These events parallel the life of Yeshua as the Messiah who was hidden in secrecy and mystery. Joseph was elevated to a place of power and prestige. His brothers did not recognize him when he was younger as the savior of the world. The purpose of the disguise was similar to what we find here in the life of Joseph and his brothers, to know one’s intentions, and the motivation (repentance) behind seeking Him. This is part of the divine disguise, to demonstrate humility, and submission to the will of God according to His Torah. This being done through faith and not according to our own will power. Many miss who Yeshua was by not believing he is the Messiah of God because they expected him to come with political power and military might. Following his resurrection, we are told Yeshua has been given great power, authority, and majesty over all of creation. (see 2 Peter 1:12-21) Again a parallel is found to Joseph being given a position of power, authority, and majesty, coupled with his ability to save lives from the famine by providing food. Yeshua, shrouded in mystery is able to save, deliver, and redeem us from our sins. The kind of kingdom that Yeshua offers us is a heavenly one that comes to dwell in our hearts that speaks of having a relationship with God our Father in heaven. The trend that we observe in the Scriptures is the Lord God Almighty emphasizing in His Word how He desires obedience as opposed to sacrifice. The emphasis of Yeshua’s ministry was also of obedience to God’s Word in love and righteousness. What history teaches us from the Torah, Neviim, and Ketuvim (תנך, Tanach) is if God’s people were to walk in His ways, there would be no need for deliverance from the nations because God is with us! The Scriptures speak prophetically saying all the nations would one day have a desire to draw near to seek the Lord at Jerusalem (Isaiah 2) God’s holy city. When Yeshua come to lay down his life for ours, he lived by example, and doing so helps us to understand what it means to live in service to God and of telling men of the great mercy and love our God has for us. Believing in the Lord God Creator of heaven and earth, and in His Messiah Yeshua, brings His presence and His kingdom to Earth in the hearts of men! This is the message of the Torah and the Gospel!

Each of us must be cleansed from Tzaraat (Leprosy), פרשת תזריע,...

Parashat VaYakhel, Is there hope in the mitzvot?