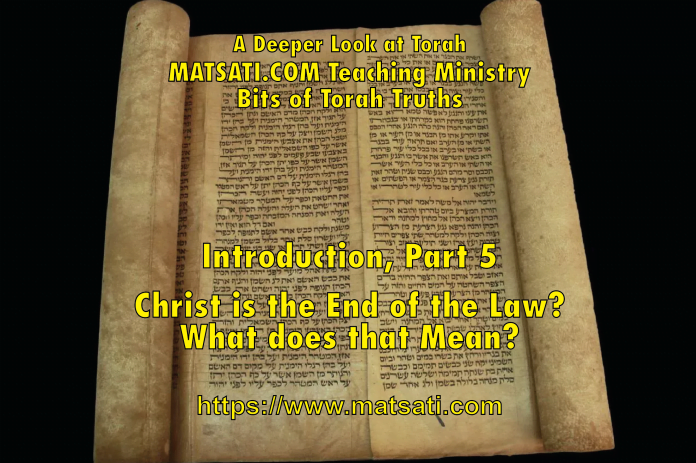 Many people today believe that Jesus (Yeshua) came to do away with the law based in part on what Paul wrote according to Romans 10:4. The question for us today though is “what does that mean exactly that Christ is the End of the Law?” What are the general conclusions that one comes to based upon this approach to the Torah? The Apostle Paul wrote in Romans 10:4 saying “For Christ is the end of the Law for righteousness to everyone who believes.” Many assume that this means Yeshua did away with the Torah. This however is in contradiction to what Yeshua said concerning the Law of God saying, “Do not think that I came to destroy the Law or the Prophets. I did not come to destroy but to fulfill. For assuredly, I say to you, till heaven and earth pass away, one jot or one tittle will by no means pass from the law till all is fulfilled.” (Matthew 5:17-18, 17Μὴ νομίσητε ὅτι ἦλθον καταλῦσαι τὸν νόμον ἢ τοὺς προφήτας: οὐκ ἦλθον καταλῦσαι ἀλλὰ πληρῶσαι. 18ἀμὴν γὰρ λέγω ὑμῖν, ἕως ἂν παρέλθῃ ὁ οὐρανὸς καὶ ἡ γῆ, ἰῶτα ἓν ἢ μία κεραία οὐ μὴ παρέλθῃ ἀπὸ τοῦ νόμου ἕως ἂν πάντα γένηται.). Regardless of what Yeshua said, many conclude based upon what Paul wrote that Yeshua meant something specific when he said “fulfill” in regard to the Torah, that this means “he fulfills the Torah so we don’t have to.” I have heard this taught at the pulpit many times! If we look closely at the Greek text however, we see the word “fulfill” in verse 17 is the Greek word πληρῶσαι plerosai meaning “to fill up, to fill, to the full.” (Greek Lexicon: πληρόω,v {play-ro’-o}, 1) to make full, to fill up, i.e. to fill to the full 1a) to cause to abound, to furnish or supply liberally.) The definition of pleroo shows that Yeshua was not saying that he would end the Torah but that His thoughts and actions perfectly embodied its intent. He kept the Torah and he taught Torah to all. In verse 18 the word “fulfilled” is from the Greek word γένηται ginomai (γίνομαι, ghin’-om-ahee} meaning: 1) to become, i.e. to come into existence, begin to be, receive being 2) to become, i.e. to come to pass, happen, “to come into existence, to be,” etc.) This is to say that the Torah will continue throughout God’s plan for mankind, it did not end 2,000 years ago. Yeshua himself state that He did not come to destroy the Torah. In fact, Yeshua went on to describe those who taught differently, saying “Whoever therefore breaks one of the least of these commandments, and teaches men so, shall be called least in the kingdom of heaven; but whoever does and teaches them, he shall be called great in the kingdom of heaven.” (Matthew 5:19) This little exercise in the Greek text illustrates the significance of the problems involved in studying the Scriptures in a translation only as opposed to digging into the Greek and Hebrew texts. When we dig deeper into the Greek and Hebrew texts, we are able to learn a little bit more concerning the intent of what was said or written in the Gospels and the letters of Paul. Another important facet of studying a language that is not native to the reader is this causes one to think a little more critically upon the text, on its meaning, and ponder what the original intent for each word and verse.

When we study the Scriptures, we want to be as concise was possible in the sense that we are understanding the intent of the message. This becomes a little more difficult when we only use one language, which is a translation. It is important to note for example, the Greek language is ranked as the richest in the world with 5 million words and 70 million word types! Greek roots are often used to coin new words for other languages, especially in  medicine and the sciences. This illustrates how important it is to study the Greek text as there are many things the author may be implying by his choice of words. The English language on the other hand, Oxford English dictionary contains entries for 171,476 words, and Webster’s third edition contains 470,000 entries. This puts the English language as slightly more concise from the sense that the author is limited in the vocabulary that is available to express what he wants to say. The Hebrew language has a vocabulary of half a million, but only 8,700 words making its writing much more concise as compared to the English and Greek languages. The point is, when looking at the Hebrew text, there will be nuances in the text, in the way that it is written, that may draw out some very important concepts that may be lost in the translation.

Let’s take a little closer look at the text in Romans 10 from the Hebrew translation.

10:1 Brethren, my heart’s desire and my prayer to God for them is for their salvation. 10:2 For I testify about them that they have a zeal for God, but not in accordance with knowledge. 10:3 For not knowing about God’s righteousness and seeking to establish their own, they did not subject themselves to the righteousness of God. 10:4 For Christ is the end of the law for righteousness to everyone who believes. 10:5 For Moses writes that the man who practices the righteousness which is based on law shall live by that righteousness. 10:6 But the righteousness based on faith speaks as follows: ‘Do not say in your heart, ‘Who will ascend into heaven?’ (that is, to bring Christ down), 10:7 or ‘Who will descend into the abyss?’ (that is, to bring Christ up from the dead).’ 10:8 But what does it say? ‘The word is near you, in your mouth and in your heart’ that is, the word of faith which we are preaching, 10:9 that if you confess with your mouth Jesus as Lord, and believe in your heart that God raised Him from the dead, you will be saved; 10:10 for with the heart a person believes, resulting in righteousness, and with the mouth he confesses, resulting in salvation. 10:11 For the Scripture says, ‘Whoever believes in Him will not be disappointed.’ 10:12 For there is no distinction between Jew and Greek; for the same Lord is Lord of all, abounding in riches for all who call on Him; 10:13 for ‘Whoever will call on the name of the Lord will be saved.’ (NASB)

What does it mean then when Paul says that “Christ is the end of the Torah?” Let’s see what we know so far:

These few references reveal to us how the Torah defines sin, and how we are all deserving of death (Romans 3:23, 6:23), and that our own righteousness never measures up to God’s righteousness. (Galatians 2:16) The Torah leads us to understand our need for a Savior, something we have in the Messiah Yeshua. It is in this way that Yeshua is the end goal, the purpose, the objective of the Torah. This becomes clearer as we read what John wrote saying, “He who says he abides in Him ought himself also to walk just as He walked” (1 John 2:6). The Lord God gave us His Torah so that we know how to live as He is living in our midst, in our hearts, and in our lives. God’s mitzvot (commandments) also teach us how to love one another, to do so by being selfless as we read in Devarim / Deuteronomy 6 and Vayikra / Leviticus 19:18, “‘You shall love the LORD your God with all your heart, with all your soul, and with all your mind.’ This is the first and great commandment. And the second is like it: ‘You shall love your neighbor as yourself.’ On these two commandments hang all the Law and the Prophets” (Matthew 22:37-40). The ten commandments outline these very things, and Paul is saying that these things are still binding for God’s people. The difference that Paul is teaching is in relation to our seeking the Lord God in heaven and His Messiah to help us to live according to His Word. To understand these things in a greater way comes by way of studying the original languages, and more importantly having understanding, the joy we receive when applying these truths to our lives! Therefore let us do what the Lord God Almighty and His Messiah Expects us to do, to live our lives for Him according to His Word!

Electrical energy can be captured as liquid air – A Spiritual...