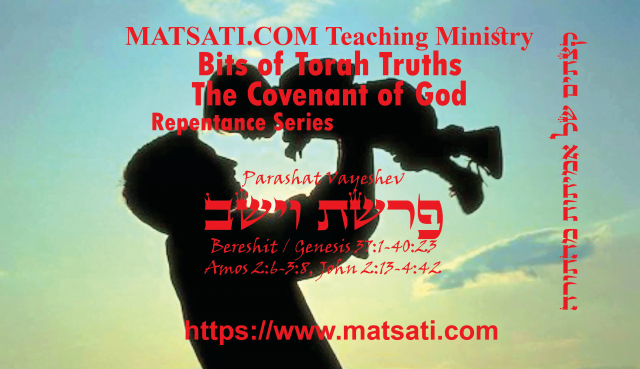 This week’s Torah portion opens with the introduction on Joseph the son of Jacob, the Scriptures state the following, וַיִּרְא֣וּ אֶחָ֗יו כִּֽי־אֹת֞וֹ אָהַ֤ב אֲבִיהֶם֙ מִכָּל־אֶחָ֔יו וַֽיִּשְׂנְא֖וּ אֹת֑וֹ וְלֹ֥א יָכְל֖וּ דַּבְּר֥וֹ לְשָׁלֹֽם׃ 37:4 And when his brothers saw that their father loved him more than any of his brothers, they hated him so that they could not speak a friendly word to him. These Scriptures speak of Jacob loving one son more than the others. This had the effect of causing enmity between Joseph and his brothers. Rashi on Bereshit / Genesis 37:4 Part 1 says, “ולא יכלו דברו לשלום AND THEY COULD NOT SPEAK PEACEABLY TO HIM — from what is stated to their discredit we may infer something to their credit: they did not speak one thing with their mouth having another thing quite different in their hearts (Genesis Rabbah 84:9).” Rashi brings out a certain aspect of Joseph’s brothers, saying that they spoke one thing and believed in their hearts something different. This appears to create a double standard in one’s heart to give the appearance of righteousness, truth, and justice on the outside, while on the inside there was only feelings of murder, injustice, and hatred. Rabbeinu Bahya on Bereshit / Genesis 37:4 Part 1 on the other hand has the following to say, “ולא יכלו דברו לשלום, “and they could not speak about him peacefully.” This was actually a positive aspect of their characters. Instead of hiding their hostility and flattering Joseph, they were straightforward in revealing their feelings toward him (Bereshit Rabbah. 84,9). We find this characteristic praised by Solomon in Proverbs 29,5 where he said: גבר מחליק על רעהו רשת פורש על פעמיו, “a man who flatters his neighbor actually spreads a net for his feet.” The prophet actually compliments Avshalom when he said (Samuel II 13,22) ולא דבר אבשלום עם אמנון למרע ועד טוב כי שנא אבשלום את אמנון. “and Avshalom did not speak to Amnon either friendly or unfriendly words for Avshalom hated Amnon (who had raped his sister).” Rabbeinu Bahya states that Joseph’s brothers were straight forward with their hostility towards Joseph, they were not hiding their anger. When we consider the Torah, this text draws out how we should treat one another. We are to not be false in our dealings with others, having a pretense on the outside and darkness on the inside. If we consider the truthfulness of these things, there is a parallel to what we read David writing in the Psalm speaking of his own short comings in relation to God’s Torah saying the following, ג עַל-גַּבִּי חָרְשׁוּ חֹרְשִׁים הֶאֱרִיכוּ לְמַעֲנִותָם [לְמַעֲנִיתָם]: 130:3 If You, Lord, should mark iniquities, O Lord, who could stand? (NASB) David recognizes that all men fall short of the glory of God, that none can stand. This statement “all have sinned,” is found also in Romans 3:32 (“For all have sinned and fall short of the glory of God”) This basically means that we all have become lawbreakers because sin is the violation of God’s Torah (1 John 3:40). Sin is the general characteristic of unrighteousness, godlessness, and wickedness. Because of the Yetzer Hara (Evil inclination) and mankind always choosing to give into the Tetzer Hara, we are all guilty before God. We are sinners by nature and by our own acts of transgression against God’s Torah. Note how Paul wrote to the romans that all have sinned indicating that all of mankind has participated in sin in some form or another. Redemption is found in the Lord, for mercy, forgiveness, and restoration are the ways of God’s love for His people. In light of what we know based upon the Scriptures, one of the most significant aspects of our lives as God’s people is the promise of His presence in our lives to overcome sin. The Lord gave us His Torah to show us the way of righteousness, justice, holiness, and truth. To be dead to sin means we no longer need to be controlled by our evil desires, but are empowered to overcome. Romans 6:17 teaches us “though you used to be slaves to sin, you have come to obey from your heart the pattern of teaching that has now claimed your allegiance.” Paul says before the coming of the Messiah, we were “slaves” to sin. Placing our faith in the Messiah Yeshua, we have a new Master. Sin continues to exist, but we are no longer dominated by it.

Parashat Ki Tetze, Do our hearts have equal weights and measures?