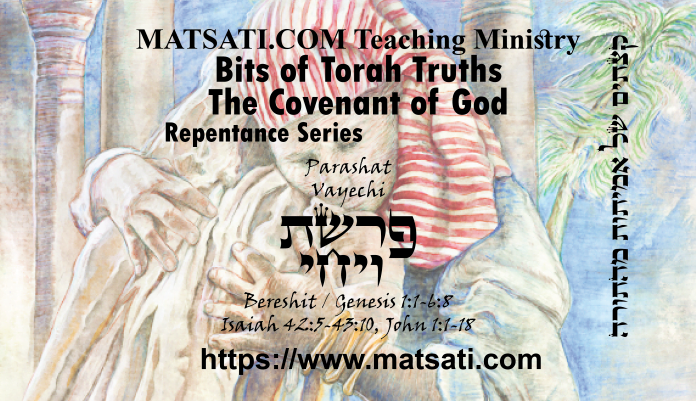 In this week’s Torah portion, Parashat Vayechi, we read the following, Bereshit / Genesis 50:15 When Joseph’s brothers saw that their father was dead, they said, ‘What if Joseph bears a grudge against us and pays us back in full for all the wrong which we did to him!’ 50:16 So they sent a message to Joseph, saying, ‘Your father charged before he died, saying, 50:17 ‘Thus you shall say to Joseph, ‘Please forgive, I beg you, the transgression of your brothers and their sin, for they did you wrong.’’ And now, please forgive the transgression of the servants of the God of your father.’ And Joseph wept when they spoke to him. 50:18 Then his brothers also came and fell down before him and said, ‘Behold, we are your servants.’ 50:19 But Joseph said to them, ‘Do not be afraid, for am I in God’s place? 50:20 ‘As for you, you meant evil against me, but God meant it for good in order to bring about this present result, to preserve many people alive. 50:21 ‘So therefore, do not be afraid; I will provide for you and your little ones.’ So he comforted them and spoke kindly to them. (NASB) It is interesting how Joseph’s brothers did not go to him personally, but sent messengers instead. Only after the initial message was brought, and we read that Joseph wept when hearing the message, are we told his brothers came and fell down before him seeking his forgiveness. His brothers were worried when Jacob died that Joseph would seek retribution for what they had done to him so many years prior. They devised a plan to seek His mercy and sent messengers with a message. The Scriptures teach us that a righteous man forgives. Joseph’s brothers however lie in an attempt to save their lives. Rashi provides an extensive interpretation on what is going on here in the reasoning of his brothers. Rashi on Bereshit / Genesis 50:15 Part 2 states the following, “לו ישטמנו means PERHAPS HE WILL HATE US. The word has many different meanings…There is an example of לו used in the sense of “perhaps”, — in our verse — “Perhaps he will hate us”, but there is no other example of its usage in this sense in Scripture. Here it corresponds in sense with the word אולי, “perhaps”, as for example in (Genesis 24:5) “אולי the woman will not be willing to follow me” which means “perhaps she will not etc.” As a matter of fact אולי has all the meanings of לו, for there are examples of אולי denoting a petition as for instance (2 Samuel 16:12) “Perhaps (אולי) the Lord will look upon mine eye”, (where the context shows that this involves a kind of petition that God should do this); (Joshua 14:12) “Perhaps (אולי) the Lord will be with me [and I shall drive them out]”, (involving also a petition that God should do this), where אולי has a similar meaning to לו in (Genesis 30:34) “Would (לו) it might be according to thy word”. Then again the word אולי has the meaning of “if”; for example, (Genesis 18:24) “Perhaps (אולי) there are fifty righteous [wilt Thou destroy etc.]” (which is equivalent to “if there are fifty… wilt thou destroy?”.)” What Rashi is telling us is unrepentant sin leaves us asking questions of “perhaps” and “what if,” without the assurance of peace before God. The concept of “assurance” of our faith (Hebrews 10:22) is a sense of deep peace and consolation before God. Assurance however is something that is cultivated in our lives as we grow closer to and walk with God according to His Word. Joseph’s brothers neglected this aspect of their faith in their lives before God. Note how their lack of faith is demonstrated in Rashi’s words on Bereshit / Genesis 50:16, Part 2 in which he says, “אביך צוה THY FATHER DID COMMAND — They altered the facts (they stated something that was false) for the sake of peace, for Jacob had given them no such command because Joseph was not suspect in his sight (Yevamot 65b)).” Rashi’s interpretation ( on Bereshit / Genesis 50:17 Part 1) he goes on to say that the messengers were to argue for the forgiveness of his brothers because they are the servants of God, what they had done was the will of God to save all peoples from this great famine. This causes Joseph to recognize the Lord’s hand at work, and to not take matters into our own hands because the Lord is working out His plan for our lives. The same reasoning may be applied to each one of us in regards to everything that happens in our lives. This is why Yeshua raised the standard of forgiveness, to forgive even our enemies, regardless of whether one is a servant of God or not, under the idea that one may be serving God’s will and not know it. Taking this perspective will help us to continue to walk in God’s ways of righteousness, justice, mercy, and truth. Choosing what is right, walking in the spirit, and living our lives according to God’s Word!