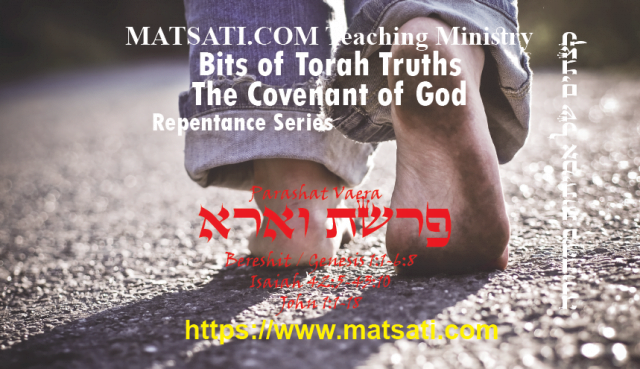 At the end of last week’s reading, we read in Shemot / Exodus 6:1 וַיֹּ֤אמֶר יְהוָה֙ אֶל־מֹשֶׁ֔ה עַתָּ֣ה תִרְאֶ֔ה אֲשֶׁ֥ר אֶֽעֱשֶׂ֖ה לְפַרְעֹ֑ה כִּ֣י בְיָ֤ד חֲזָקָה֙ יְשַׁלְּחֵ֔ם וּבְיָ֣ד חֲזָקָ֔ה יְגָרְשֵׁ֖ם מֵאַרְצֽוֹ׃ (ס) Then the LORD said to Moses, “You shall soon (now you will, עַתָּ֣ה תִרְאֶ֔ה) see what I will do to Pharaoh: he shall let them go because of a greater might; indeed, because of a greater might he shall drive them from his land.” The rabbis connect this to the Akeda (the binding of Isaac) when Abraham was called to sacrifice his only son to the Lord on the mountain of Moriah. (see Rashi on Shemot / Exodus 6:1, Part 1, and Bereshit / Genesis 22) What we see here in the Torah portion for this week, is the rabbis connecting the words of the Lord to the Akeda, the Lord was saying to Moshe that when He subjected Abraham to a test of his faith, he did not question His commands as it is related to faithfulness as opposed to Moshe questioning the Lord sending him to Egypt to deliver Israel from bondage. The Lord was extending His authority to Moshe to deliver His people from bondage. Moshe however questioned that authority. Sforno speaks of Pharaoh and the Lord God delivering His people in the following way: Sforno on Shemot / Exodus 6:1 Part 1, . עַתָּ֣ה תִרְאֶ֔ה, now that you have seen yourself the sin of Pharaoh who has the nerve to hold on to the Israelites with the authority of his office, you will see that he will not only release them voluntarily, but בְיָ֤ד חֲזָקָה֙ יְשַׁלְּחֵ֔ם, not only will he release them, but he will be forced to get rid of them post haste due to the problems he will have while they are still in his country. The Hebrew text states with a powerful hand (בְיָ֤ד חֲזָקָה֙) he will be forced to send them (יְשַׁלְּחֵ֔ם) out of his country. This is the way the text speaks of the Lord working powerfully on behalf of His people. Sforno speaks of the difficulties Pharaoh will have due to his not submitting to the will of God, and remaining in his abstinence against the command of the Lord. It is interesting that if Pharaoh had obeyed the command of God all of Egypt would have been spared. The authority of God in our lives as we humble our hearts before Him according to His Word is connected to faithfulness and to the commands in the Torah. Notice how the release with authority is an issue we all deal with in relation to our sin. If we hold on to sin it is like being enslaved to sin. The rabbinic analysis of Shemot / Exodus 6:1 states that “now you will see” (עתה תראה) is a reference to Moshe witnessing the redemption of Israel if he would have faith and be faithful to God’s command. This is what it means to live and walk in faith! The Lord wants to use you in the midst of your brokenness and imperfections. What we find here is Moshe speaking to the Lord God about the situation of Israel becoming worse when the Lord entered into the picture, and the failure to speak to the rock (Bamidbar / Numbers 20:5-14), these two things combined lead to Moshe not being allowed to lead the conquest of the Land of Canaan. What these things teach us about ourselves is to maintain our faithfulness to the Lord regardless of the situations that we encounter in life, not to blame the Lord for our calamity, and to do as God commands, not taking matters into our own hands under the assumption that we know better.

Our best theoretical model can only explain 5% of the universe