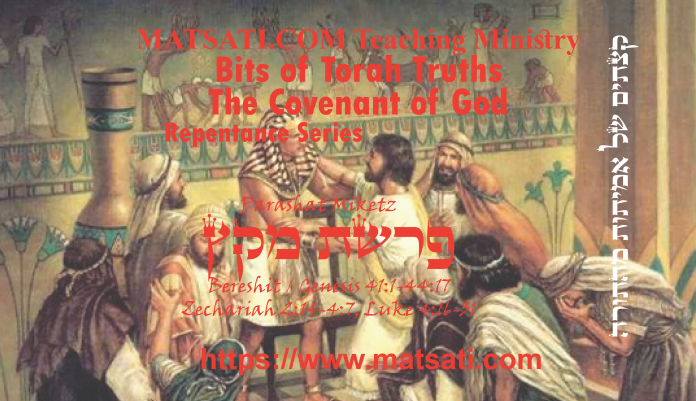 In this week’s Torah portion, Parashat Miketz, we read the following, Bereshit / Genesis 42:5 So the sons of Israel came to buy grain among those who were coming, for the famine was in the land of Canaan also. 42:6 Now Joseph was the ruler over the land; he was the one who sold to all the people of the land. And Joseph’s brothers came and bowed down to him with their faces to the ground. 42:7 When Joseph saw his brothers he recognized them, but he disguised himself to them and spoke to them harshly. And he said to them, ‘Where have you come from?’ And they said, ‘From the land of Canaan, to buy food.’ 42:8 But Joseph had recognized his brothers, although they did not recognize him. 42:9 Joseph remembered the dreams which he had about them, and said to them, ‘You are spies; you have come to look at the undefended parts of our land.’ 42:10 Then they said to him, ‘No, my lord, but your servants have come to buy food. 42:11 ‘We are all sons of one man; we are honest men, your servants are not spies.’ 42:12 Yet he said to them, ‘No, but you have come to look at the undefended parts of our land!’ (NASB) A lot can be drawn out of these seven verses, we read how the Lord established Joseph above all people as a ruler. His brothers come to buy food, he recognized them, they did not recognize him. Their inability to recognize him may be spiritual in the sense how their hearts were seared with hatred for their brother, leading to murder, selling him into slavery, and then believing he was dead. Though they did not physically murder him, selling him into slavery was considered a death sentence. Joseph tests his brothers to see if they have changed or if they have continued to walk in the way of the wicked. Something to note in the story of Joseph and his brothers was his brothers were not repentant until they were confronted with some insurmountable thing where they had to trust in the Lord God of Israel and confess their sins. Looking at the rabbis, the commentaries such as Chizkuni on Bereshit / Genesis 42:12 Part 1, Rashbam on Bereshit / Genesis 42:12 Part 1, Rashi on Bereshit / Genesis 42:12 Part 1, Sforno on Bereshit / Genesis 42:12 Part 1 and 2, and Siftei Chkhamim on Bereshit / Genesis 42:12 Part 1, all these commentaries speak of Joseph’s brothers saying that they did not enter into Egypt through the same gate. They took different gates, different paths to the same location to buy food. Each commentary states that Joseph knew this which is why he questioned His brothers in the way that he did saying they are spies. Why do you think the rabbis focus upon this entering through differing gates? What are the Rabbis are trying to draw out from the text? There may be something about not traveling together, traveling separately which suggests they were not all of the same mind. This draws in the idea or concept of “all religions are simply different paths up the same mountain.” The problem with this form of reasoning is related to the journey one is taking in seeking the Lord and the fact that separate but equal does not work. All who are seeking the same goal but taking differing paths is not enough. The path we take changes us and forms who we are. How we perceive the Lord God in heaven will in part be determined by the spiritual journey one is taking, how we have dealt with obstacles on our path, and the manner in which we strive in our walk before the Lord. By choosing a different path than what is laid out in Scripture, one’s understanding of God, who He is will be different. The biblical context always draws in the marriage relationship with God. If we consider the marriage relationship, people of the same faith tend to be happier as opposed to those of differing faiths. Religion affects things that affect our marriages, for example, how we spend our time, how we spend our money and how we raise our children, etc. These are issues that are significant because they relate to the way in which we live for the Lord (faithfulness), how we understand who God is, how we treat others (i.e. what we want to instill in our children as considered good biblical values of morality and love), and to having a basis (a standard) for living. When we read that Joseph’s brothers each took a separate path to the same location to buy food, this draws in a particular context that leads to Joseph’s reasons for questioning his brothers in the way that he did. Their repentance and confession of their sins is related to their being confronted with an insurmountable obstacle. The lesson that we may learn from this week’s Torah portion is not to wait until we are confronted with an insurmountable problem before turning from sin and turning to the Lord. Our hope and our salvation is found in the Lord God of Israel and His Messiah Yeshua. If we are not seeking Him daily, we will not grow in our lives and relationship with the Lord. This will lead to the Lord moving in a way to draw us back to our first love, to Him and His ways. That journey may not be so enjoyable as opposed to taking action now and rejoicing in the blessings He is providing.