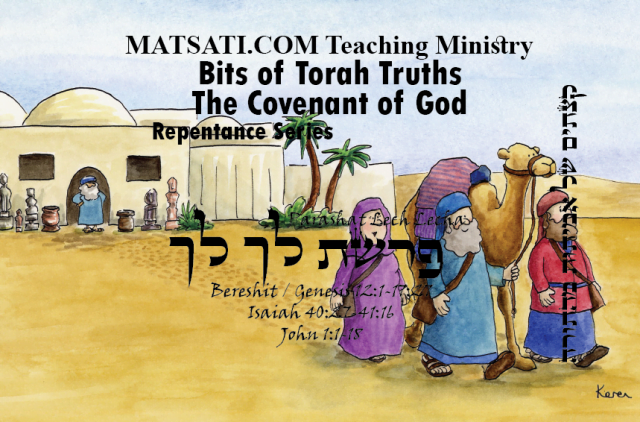 At the end of Parashat Noach we read the following, לא וַיִּקַּח תֶּרַח אֶת-אַבְרָם בְּנוֹ וְאֶת-לוֹט בֶּן-הָרָן בֶּן-בְּנוֹ וְאֵת שָֹרַי כַּלָּתוֹ אֵשֶׁת אַבְרָם בְּנוֹ וַיֵּצְאוּ אִתָּם מֵאוּר כַּשְֹדִּים לָלֶכֶת אַרְצָה כְּנַעַן וַיָּבֹאוּ עַד-חָרָן וַיֵּשְׁבוּ שָׁם: לב וַיִּהְיוּ יְמֵי-תֶרַח חָמֵשׁ שָׁנִים וּמָאתַיִם שָׁנָה וַיָּמָת תֶּרַח בְּחָרָן: 11:31 Terah took Abram his son, and Lot the son of Haran, his grandson, and Sarai his daughter-in-law, his son Abram’s wife; and they went out together from Ur of the Chaldeans in order to enter the land of Canaan; and they went as far as Haran, and settled there. (NASB) The interesting point here is this family, Terah and his son Abram, along with Lot the son of Haran, already had the initiative to move to Canaan prior to Parashat Lech Lecha. Did the Lord speak to Terah in a similar way He had spoken to Abram? Radak on Bereshit / Genesis 11:31 Part 1 claims Abram was well respected and had told his father about the vision God had given him to move to the land of Canaan, and so they set out to do so. Rashi explains that the plural mode of the word ויצאו, refers to Terah and Abram, Lot and Sarai, Abram’s wife, where Abram was secondary to the minor player, Terah. Nachmanides writes that Abram was a more distinguished person than his father and the other people journeying with them, and so the Torah employs the plural mode, “they went with them,” seeing that, as the Torah writes, Terah had taken the initiative in emigrating. To the onlookers it appeared as if Abram had gone along with his father’s decision in the matter. The other members of the entourage continued to travel with Abram as their leader also after Abram had left his father behind in Haran. (Bereshit / Genesis 12,4) (Tur HaAroch, Genesis 11:31 Part 1) Did Terah come short of entering the land of Canaan because the Lord had not called him specifically? Based upon this text, Abram’s family had decided to leave Ur of the Caldeans and move to Canaan. What was the main reason? Did the region they lived become too pagan? Did those surrounding Terah and his family force them to move to another location due to their sin? We are not given these details, but we are told in Parashat Noach and then in Parashat Lech Lecha, the Lord had a plan for them to move to Canaan and called Abram to fulfill that journey. Abram had faith and he was faithful to do what the Lord commanded him to do.  Read more here: BTT_Parashat-Lech Lecha-2017

The greatness of God is Coupled to His Attribute of Goodness,...