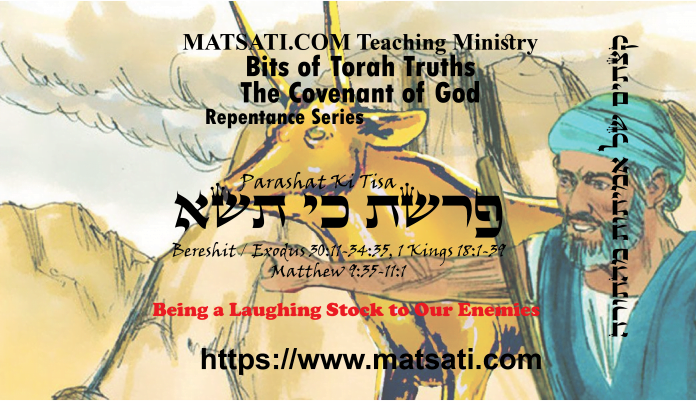 In this week’s reading Moshe states the following, Shemot / Exodus 32:25-26, כה וַיַּרְא מֹשֶׁה אֶת-הָעָם כִּי פָרֻעַ הוּא כִּי-פְרָעֹה אַהֲרֹן לְשִׁמְצָה בְּקָמֵיהֶם: כו וַיַּעֲמֹד מֹשֶׁה בְּשַׁעַר הַמַּחֲנֶה וַיֹּאמֶר מִי לַיהוָֹה אֵלָי וַיֵּאָסְפוּ אֵלָיו כָּל-בְּנֵי לֵוִי: 32:25 Moses saw that the people were running wild and that Aaron had let them get out of control and so become a laughingstock to their enemies. 32:26 So he stood at the entrance to the camp and said, “Whoever is for the Lord, come to me.” And all the Levites rallied to him. (NIV) Moshe states that due to the people’s sins they become a laughing stock to their enemies. How do they become a laughing stock to their enemies? The Hebrew text states לְשִׁמְצָה בְּקָמֵיהֶם meaning literally to be a disgrace amongst those who rise up against them. This has the meaning of the dissemination of an evil report to one’s enemy. Sforno on Shemot / Exodus 32:25 Part 3 states the following in his commentary, “לשמצה בקמיהם.Giving them a bad name among their enemies. Israel’s enemies would say about them that they had breached their covenant with their Lord, and that there was not a single one among them who was a good person, and that they did not even heed the instructions of their prophets. Even though only a small minority had ganged up on Aaron, the entire people’s reputation would now be dragged through the mud.” The idea of giving a bad name among their enemies was in the context of their sin with the golden calf and the breaking of the covenant with their Lord. The people did not heed the instructions of God and the end result, this became known amongst the people and their reputation (testimony) become tarnished. As representatives of God this is a significant problem being rooted in shame. Chizkuni on Shemot / Exodus 32:25 Part 1 looks at this from a different perspective saying, “כי פרוע הוא, “that the people were completely out of control;” they had completely abandoned their Creator’s commandments. The root פרע (פְרָעֹה) here is used in a similar sense as when Pharaoh accused Moses and Aaron as making the people completely unruly by promising them a holiday from hard labour for three days. ?למה תפריעו את העם ממעשיו (Shemot / Exodus 5:4)” The idea of being set free leading to sin is illustrated here in the people making for themselves a golden calf. The command of God was for Pharaoh to let the people go in order to worship their God in the desert at the mountain of Sinai. However, when they get to the foot of the mountain, they take on the Egyptian form of worship and become a laughing stock before the nations. This is the effect that sin has upon God’s people. Both Rashi and most other commentators understand the meaning of this verse (Shemot / Exodus 32:25) to be the dissemination of an evil report to the nations. Because Aaron was so willing to make the golden calf, he would be the cause of future generations spreading evil reports about the generation of people at this time saying they all became an idolatrous mind. This has the effect of disgracing the people in the eyes of her enemies. This is the opposite effect of what Moshe tells the people in Devarim / Deuteronomy 4:7 For what nation is there so great, who hath God so nigh unto them, as the LORD our God is in all things that we call upon him for? (NASB) This observation suggests that because of their sin, they have a diminished ability to stand up against their adversaries. This same thought is also expressed in Ezekiel 29:15 “I shall diminish them so that they shall not rule over the nations.” (NASB) These things speak to the importance of being careful not to fall into idolatry, and to how we should be living our lives for the Lord.

Bits of Torah Truths, Parashat Balak, The Sin of going through...